The microsporidia are a group of unicellular intracellular parasites closely related to fungi, although the nature of the relation to the kingdom Fungi is not clear. The taxonomic position of this group has been debated and revised repeatedly; historically, they were considered protozoa and often remain managed by diagnostic parasitology laboratories. Microsporidia are characterized by the production of resistant spores that vary in size (usually 1—4 µm for medically-important species). They possess a unique organelle, the polar tubule or polar filament, which is coiled inside the spore as demonstrated by its ultrastructure. Microsporidia also possess degenerated mitochondria called mitosomes and lack a conventional Golgi apparatus.

To date, more than 1400 species belonging to over 200 genera have been described as parasites infecting a wide range of vertebrate and invertebrate hosts. There are at least 15 microsporidian species that have been identified as human pathogens; the vast majority of cases being caused by Enterocytozoon bieneusi, followed by some Encephalitozoon species (E. cuniculi, E. hellem, E. intestinalis (=Septata intestinalis)). Other less frequently reported agents include members of the genera Anncaliia (=Brachiola) (A. algerae, A. connori, A. vesicularum), Microsporidium (M. ceylonensis, M. africanum), Trachipleistophora (T. hominis, T. anthropophthera), Nosema ocularum, Pleistophora ronneafiei, Vittaforma corneae (=Nosema corneae), Tubulinosema acridophagus, and an unknown species likely belonging to Endoreticulatus. 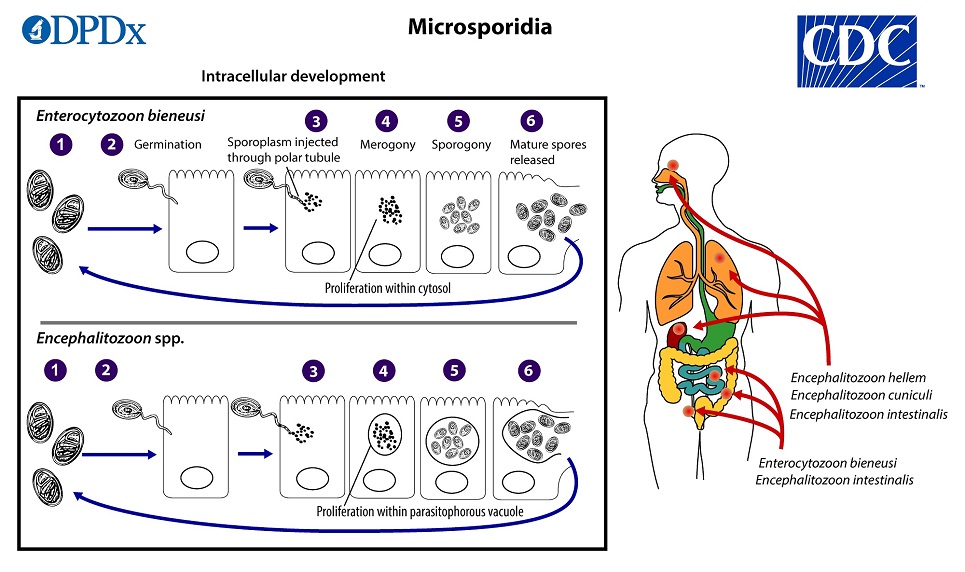 The infective form of microsporidia is the resistant spore, which can persist in the environment for months

The spore then germinates, rapidly everting its polar tubule which contacts the eukaryotic host cell membrane

. The spore then injects the infective sporoplasm into the host cell through the polar tubule

. Inside the cell, the sporoplasm enters the proliferative phase marked by extensive multiplication via merogony (binary fission or multiple fission), creating meronts

. The location of this developmental stage within the host cell varies by genus; it can occur either in direct contact with the host cell cytosol (Enterocytozoon, Nosema), inside a parasitophorous vacuole of unknown origin (Encephalitozoon), in a parasite-secreted envelope (Pleistophora, Trachipleistophora), or surrounded by the host cell endoplasmic reticulum (Endoreticulatus, Vittaforma)

.  Following the proliferative phase, meronts undergo sporogony in which the thick spore wall and invasion apparatus develop, creating sporonts and eventually mature spores when all organelles are polarized. When the spores increase in number and completely fill the host cell cytoplasm, the cell membrane is disrupted and spores are released to the surroundings

Mature spores of intestinal-localizing species may be shed in feces, although the route of transmission remains uncertain for many species. Exposure to spores in water or in soil appears to be a potentially major route, based on the finding of spores in these sources along with case histories. E. bieneusi and V. corneae have been identified in surface waters, and spores of Nosema sp. (and likely A. algerae) have been identified in ditch water. Cases of donor-derived microsporidiosis (Encephalitozoon cuniculi) following bone marrow, kidney, liver, and heart transplantation have been confirmed.

Many domestic and wild animals may be naturally infected with various medically-important microsporidia. Enterocytozoon bieneusi is generally considered a human parasite, but has been detected in swine, primates, cattle, cats, dogs, and several other mammals. Some, but not all, of these animal-derived strains appear to represent zoonotic genotypes.

Encephalitozoon cuniculi is endemic in several captive and wild rabbit populations. It has also occasionally been found in domestic dogs, cats, foxes, captive monkeys, and mink. Birds, especially psittacines (parrots, parakeets, love birds, budgerigars, etc.), may represent reservoirs for Encephalitozoon hellem. Unlike the other two important members of the genus, E. intestinalis is only rarely identified in animals other than humans.

The host range of the other microsporidia known to infect humans is not as well known. No animal reservoir has been identified for Vittaforma cornea. Pleistophora spp. are found in fish and reptiles, but spore morphology in these species is inconsistent with that of the species implicated in human infections (P. ronneafiei). Tubulinosema acridophagus, Trachipleistophora spp., and Anncaliia algerae are related to known insect parasites, however, the significance of insects in transmission is unclear.

Microsporidia are being increasingly recognized as opportunistic infectious agents worldwide. Efforts to characterize the global distribution of species and genotypes are ongoing.

Human microsporidiosis represents an important and rapidly emerging opportunistic disease. Historically it has been observed in severely immunocompromised persons, particularly among persons with AIDS, however the implementation of effective anti-retroviral therapies has reduced the incidence in this group considerably. Cases are also known to occur in immunocompetent individuals. The clinical manifestations of microsporidiosis are very diverse, varying according to the causal species and route of infection. Disseminated infection can be fatal. Of all of the manifestations of microsporidiosis, Enterocytozoon bieneusi-associated diarrhea is the most common. Below is a table summarizing the typical sites of infection for various species: 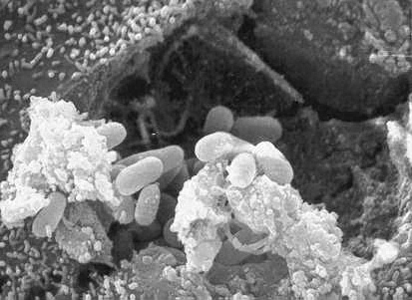 Figure A: Scanning electron micrograph showing an eukaryotic cell bursting and releasing spores of Encephalitozoon hellem to the extracellular medium. 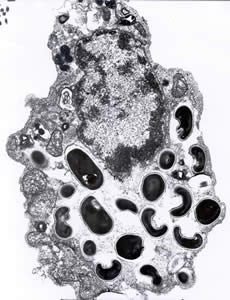 Figure B: Electron micrograph of an eukaryotic cell with Encephalitozoon intestinalis spores and developing forms inside a septated parasitophorous vacuole. The vacuole is a characteristic feature of this microsporidian species. 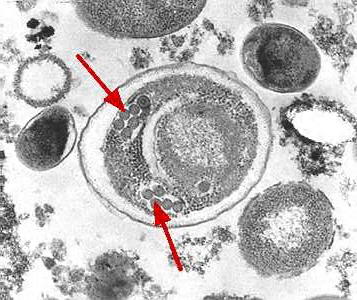 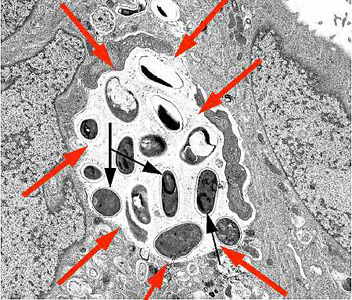 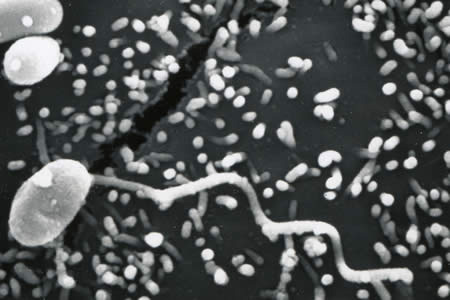 Figure E: Scanning electron micrograph of a microsporidian spore with an extruded polar tubule inserted into a eukaryotic cell. The spore injects the infective sporoplasms through its polar tubule. 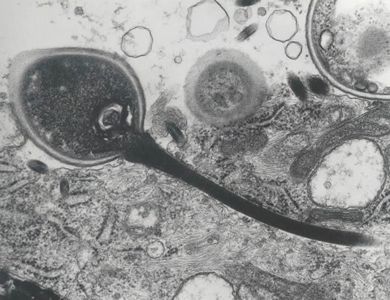 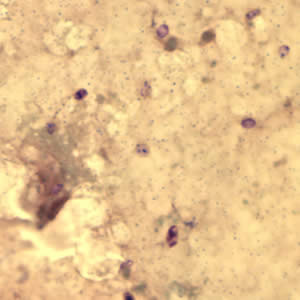 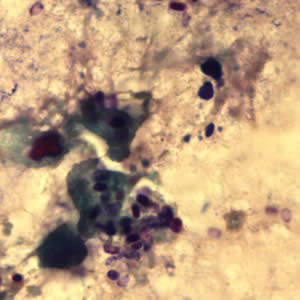 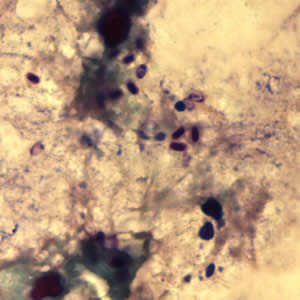 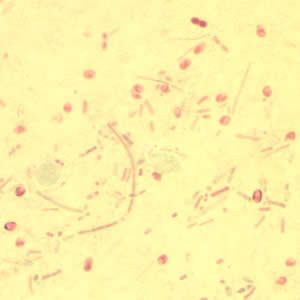 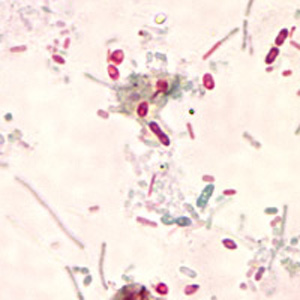 The following images are from a case of disseminated microsporidiosis caused by Encephalitozoon cuniculi, courtesy of the Mayo Clinic, Rochester, MN. Figures A-C are from urine; Figure D is from a kidney biopsy specimen. 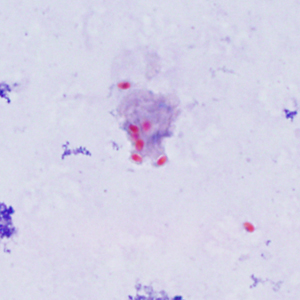 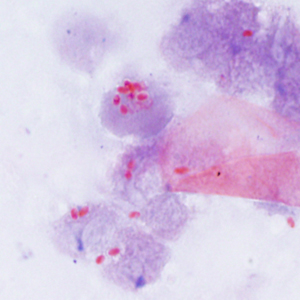 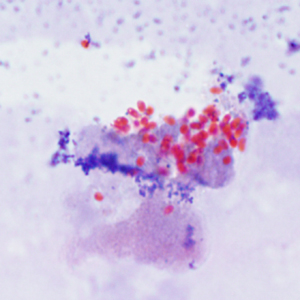 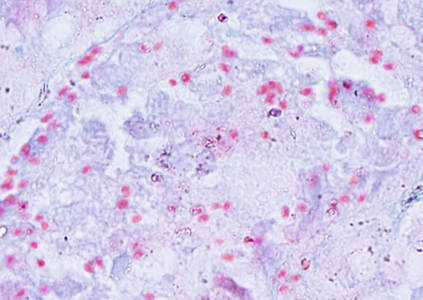 Spores of Tubulinosema acridophagus in bronchoalveolar lavage (BAL) specimens, stained with Chromotrope 2R stain. The case from which the following images were taken is courtesy of the National Institutes of Health, Bethesda, MD. 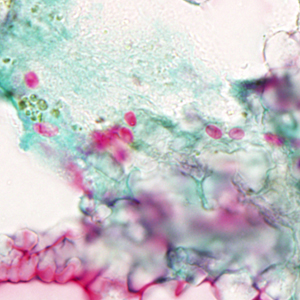 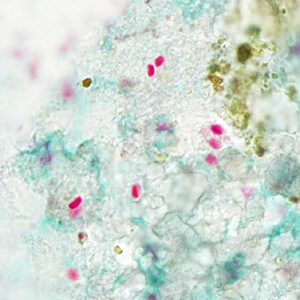 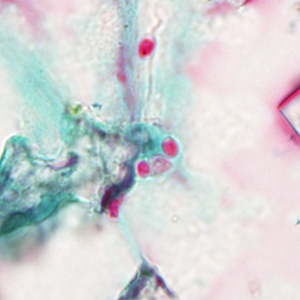 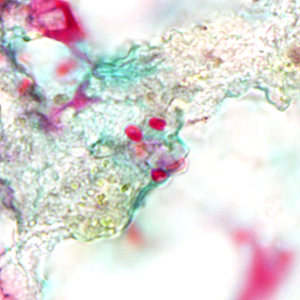 A case of ocular microsporidiosis. At the time of this writing, the species had not been confirmed. All images courtesy of the Swedish Institute of Communicable Diseases Control, Solna, Sweden. 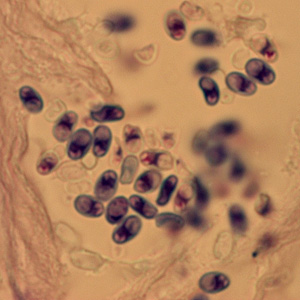 Figure A: Microsporidia spores from a corneal section, stained with Giemsa. 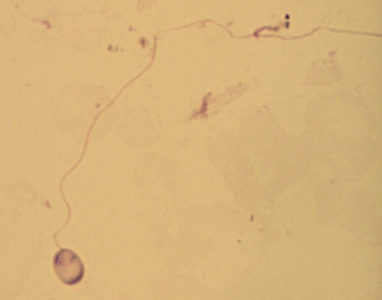 Figure B: A single microsporidia spore from the same case as Figure A, stained with Giemsa. In this image, the polar tubule has been extruded. 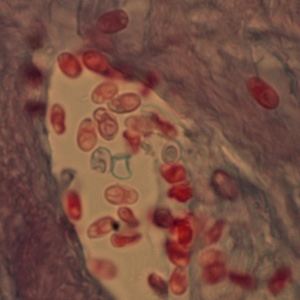 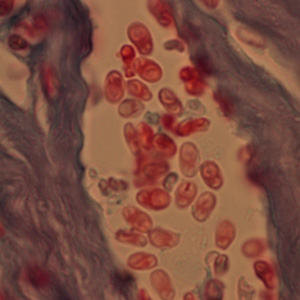 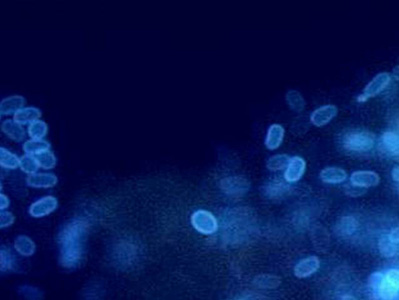 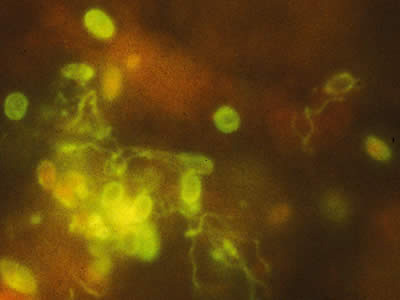 Light microscopic examination of the stained clinical smears, especially the fecal samples, is an inexpensive method of diagnosing microsporidial infections even though it does not allow identification of microsporidia to the species level. The most widely used staining technique is the Chromotrope 2R method or its modifications. This technique stains the spore and the spore wall a bright pinkish red. Often, a darker-staining equatorial band is seen in the middle of the spore. This technique, however, is lengthy and time consuming and requires about 90 min. A recently developed “Quick-Hot Gram Chromotrope technique” however, cuts down the staining time to less than 10 min and provides a good differentiation from the lightly stained background fecal materials so that the spores stand out for easy visualization.  The spores stain dark violet and the equatorial band is enhanced. In some cases dark staining Gram positive granules are also clearly seen.  Chemofluorescent agents such as Calcofluor white are also useful in the quick identification of spores in fecal smears. The spores measure from 0.8 to 1.4 µm in the case of Enterocytozoon bieneusi, and 1.5 to 4 µm in Anncaliia algerae, Encephalitozoon spp., Vittaforma corneae, and Nosema spp.

Transmission electron microscopy (TEM) is still the gold standard and is necessary for the identification of the microsporidian species, which is based on internal features of the spore such as the number of polar tubule coils. However, TEM is expensive, time consuming, and not feasible for routine diagnosis.

IFAs are available for microsporidia using monoclonal and/or polyclonal antibodies.

Microsporidial spores in diagnostic samples pose a risk of infection for laboratory workers. All procedures should be conducted under BSL2 conditions, observing standard precautions for stool samples and with all processing performed in a biosafety cabinet. The use and/or manipulation of contact lenses is discouraged and eye protection should always be worn. One case of laboratory-acquired ocular microsporidiosis has been reported due to splash exposure while not wearing appropriate eye protection.