Adults release embryonated eggs each with a fully-developed miracidium, and eggs are passed in the host’s feces

. Genera Cerithidia and Pironella are important snail hosts in Asia and the Middle East respectively. The miracidia undergo several developmental stages in the snail, i.e. sporocysts

. In addition to humans, various fish-eating mammals (e.g., cats and dogs) and birds can be infected by Heterophyes heterophyes

The main symptoms are diarrhea and colicky abdominal pain. Migration of the eggs to the heart, resulting in potentially fatal myocardial and valvular damage, has been reported from the Philippines. Migration to other organs (e.g., brain) has also been reported.

Adults of Heterophyes heterophyes are minute flukes, measuring 1-2 mm in length. The tests are large and paired, and are situated near a small ovary. The surface of the worm is covered with minute spines. Adults reside in the small intestine of the definitive host. 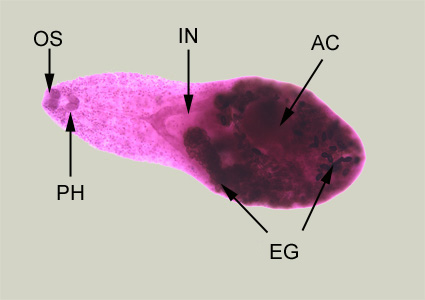 Figure A: Adult of H. heterophyes, stained with carmine. In this figure, the following structures are labeled: oral sucker (OS), pharynx (PH), intestine (IN), ventral sucker, or acetabulum (AC), and eggs within the uterus (UT) 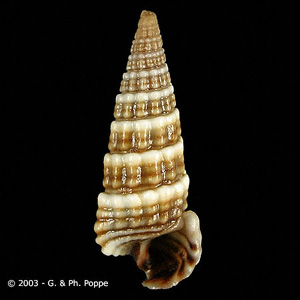 The diagnosis is based on the microscopic identification of eggs in the stool. However, the eggs are indistinguishable from those of Metagonimus yokogawai and resemble those of Clonorchis and Opisthorchis.