Many species of fleas can feed on humans. The human flea, Pulex irritans, is less-commonly seen these in industrialized areas. This species is not an effective vector of disease but can serve as an intermediate host for the cestodes Dipylidium caninum and Hymenolepis nana. The cat and dog fleas (Ctenocephalides canis and C. felis) may also feed on humans. In addition to being intermediate hosts for cestodes, C. felis can serve as a vector of Bartonella henselae (cat-scratch disease) and Rickettsia felis (feline rickettsiae). The Oriental rat flea (Xenopsylla cheopis) is the primary vector for Yersinia pestis (plague). Humans with close contact with birds may also be fed upon by the sticktight flea (Echidnophaga gallinacea). The chigo flea (Tunga penetrans) is discussed separately here.

Fleas, like other holometabolous insects, have a four-part life cycle consisting of eggs, larvae, pupae, and adults. Eggs are shed by the female in the enviroment

in about 3-4 days and feed on organic debris in the environment. The number of larval instars varies among the species. Larvae eventually form pupae

, which are in cocoons that are often covered with debris from the environment (sand, pebbles, etc). The larval and pupal stages take about 3-4 weeks to complete. Afterwards, adults hatch from pupae

The chigoe flea (Tunga penetrans) has different life cycle and is discussed in more detail here.

Ctenocephalides canis and C. felis are the dog and cat flea, respectively. Members of this genus are 3-4 mm in length, laterally-compressed and reddish-brown to black in color. The two species can be separated by the characteristics of the head and setae on the hind legs: C. canis has a head that is strongly-rounded anteriorly, and have hind tibiae with eight setae bearing notches; C. felis has a more-elongate head and hind tibiae with six setae bearing notches. Both species possess pronotal and genal combs (ctenidia). Ctenocephalides spp. are of medical importance as vectors of rickettsial diseases, including Rickettsia typhi, and may serve as intermediate hosts for tapeworms, including Hymenolepis and Dipylidium. 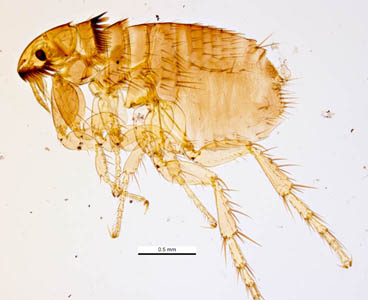 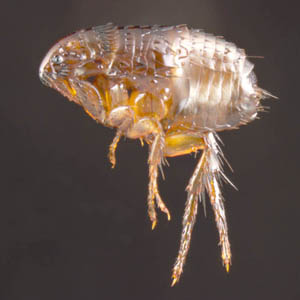 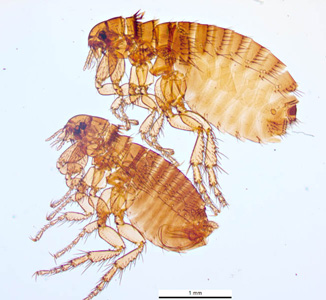 Pulex irritans is known as the human flea. Fleas are 1-4 mm in length and laterally-compressed. They lack both genal and pronotal combs (ctenidia) and the ocular setae are below the eye. The frons is broadly-rounded. This species is not an efficient vector of any flea-borne diseases, but its bite can cause allergic reactions due to salivary proteins. 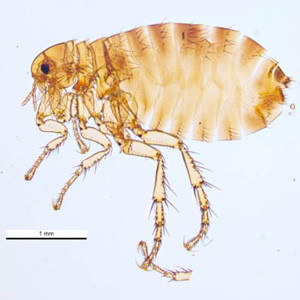 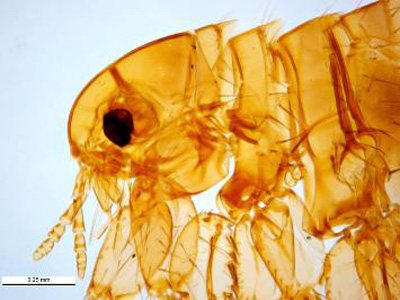 Figure B: The human flea, P. irritans. This image shows a close-up of the head region; note a lack of genal and pronotal combs. Image courtesy of Parasite and Diseases Image Library, Australia.

Xenopsylla cheopis is known as the Oriental rat flea and is the primary vector for Yersinia pestis (plague). Adults are 1.5-4 mm long and laterally-compressed. They lack both pronotal and genal combs (ctenidia). In females, the dark-colored spermatheca is often visible. 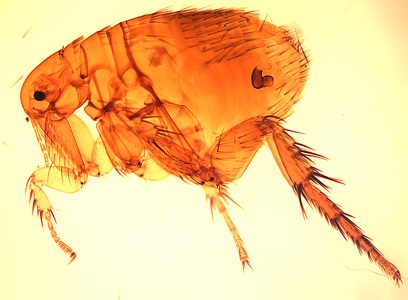