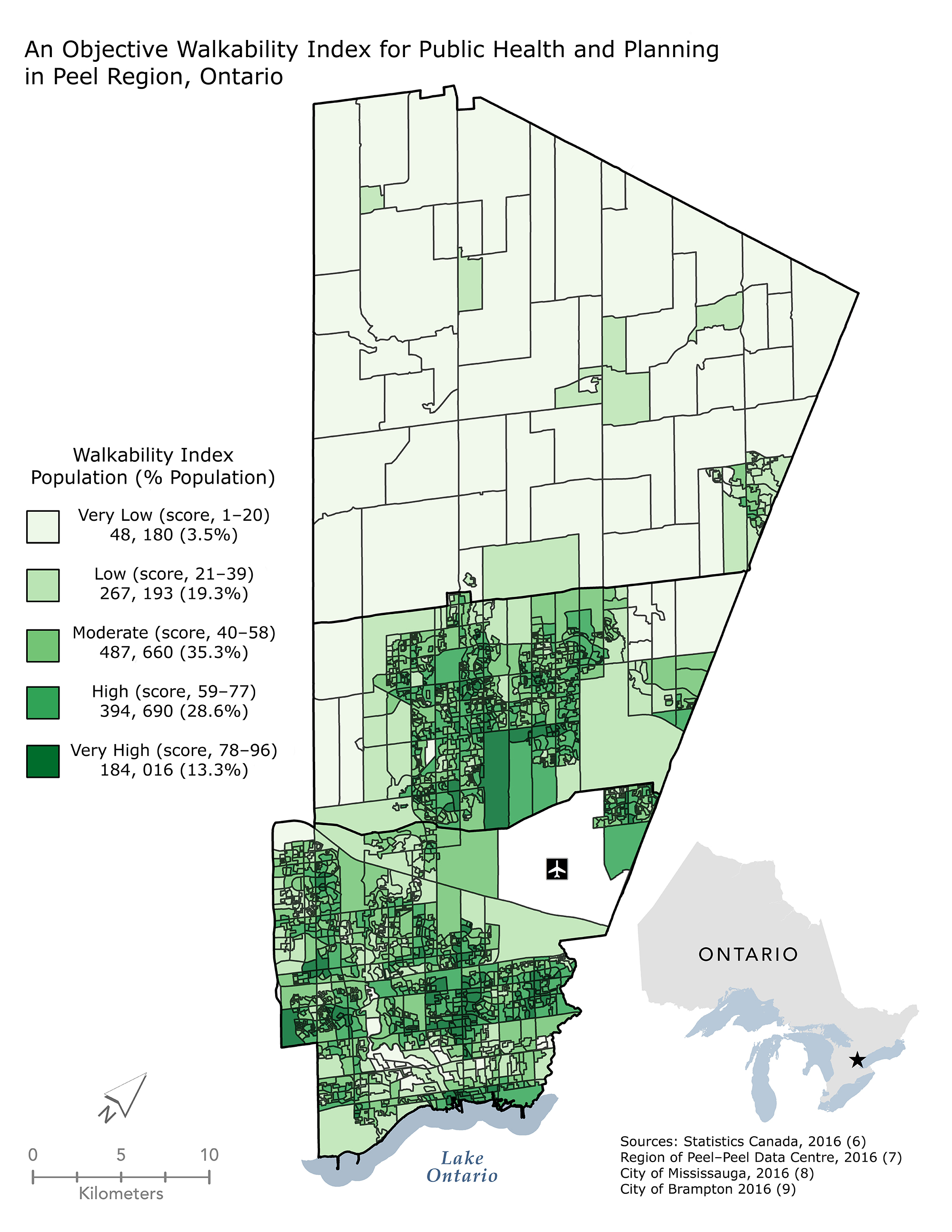 The Peel Walkability Composite Index is used as an evaluation tool and consists of 3 equally weighted components: access to retail and service outlets, access to schools and green spaces, and residential density and diversity. Understanding the capacity of the built environment to facilitate walking for utilitarian purposes (1) allows public health departments to advocate for strategic land use and infrastructure developments that promote an increase in population levels of physical activity. [A text version of this figure is also available.]

During the past decade, autocentric suburban regions in Canada experienced tremendous growth. Autocentric built environments discourage active transportation and are linked to chronic disease risk factors (eg, low physical activity levels) (2). Peel Region is a large suburban municipality in Canada with a population of 1.38 million people and an average annual growth rate of 1.3%. To promote healthier communities, the Region of Peel–Public Health partnered with land-use planners on a public health intervention that incorporated policies in Peel’s Regional Official Plan (www.peelregion.ca/planning/officialplan), which requires a health assessment on development applications. Evaluation of this intervention relies on the Peel Walkability Composite Index (PWCI).

Well-established walkability indices, including the Physical Activity in Localities and Community Environments (3) and the Neighborhood Quality of Life Study (4), empirically demonstrate the relationship between environmental attributes (ie, residential and retail density, street connectivity, and land-use mix) and physical activity outcomes. A lack of diversity in the attributes used to construct these indices is an acknowledged limitation (3,5). The PWCI was constructed by using a diverse range of objective indicators and was designed to ensure measurement repeatability.

The PWCI must be repeatable to capture differences in the index score over time. We created the PWCI in 2 stages: 1) we determined the measures to include in the index by using principal component analysis (PCA), and 2) we determined an appropriate weighting scheme to ensure measurement repeatability.

Using PCA on measures of density, diversity, and connectivity is a common approach to creating a walkability index. For the PWCI, we used PCA only to screen and select variables to construct the index. We completed PCA by using the following 14 indicators in SPSS software version 21.0.0.2 (IBM Corporation):

Indicators had high face validity and were constructed at the level of the Canadian Census dissemination area. We calculated proximity indicators by using 400-m, 800-m, or 1,600-m network distances from points of interest to residential parcels to account for population weighting within dissemination areas. We standardized indicator values by z scores before inclusion in the PCA.

We constructed the PWCI by averaging the sum of the normalized scores for the standardized indicators that loaded on the extracted principal components for each dissemination area. We normalized the retained 8 indicators (on a scale of 0 to 100) and averaged them by using equal weighting to create the composite index. This process resulted in dissemination area PWCI scores ranging from 1 to 96. These scores provide a 2016 benchmark walkability score. Using equal weighting ensures that component loading values will not influence the capacity of the PWCI to monitor changes in scores over time. We divided the composite index into 5 classes in equal intervals of walkability, from very low (score of 1–20) to very high (score of 78–96). We mapped these classes to illustrate the spatial distribution of walkability in Peel.

Many residents of Peel (41.9%) live in areas classified as highly or very highly walkable. These areas are in the downtown cores of cities that have zoning bylaws that encourage higher density and greater mix of land use. Approximately one-third of residents (35.3%) live in a moderately walkable area. These areas are in the inner suburbs, close to city cores, and benefit from proximity to schools and green space. Almost a quarter of residents (22.8%) live in areas with very low or low walkability, along suburban edges. A cluster of areas with very low walkability in the southwest is due to pedestrian barriers, including a highway and the Credit River. Planning policies in these areas encourage very low-density development, contributing to minimal walkable destinations.

The indicator data for the PWCI will be rerun every 5 years, in sequence with the Canadian Census, to monitor changes in the spatial distribution of walkability in Peel. The PWCI is an evidence-informed tool that local elected officials, planners, and public health departments can use to evaluate health-promoting built environment policies and inform future land-use policies. Understanding the spatial distribution of walkable built environments promotes strategic investments in infrastructure that are aimed at increasing levels of physical activity among adults (1).

We thank Dr Darren Scott for his valuable feedback throughout the Peel Healthy Development Mapping and Monitoring Project. No financial support was received in this work. No copyrighted material, surveys or tools were used in this work. The findings and conclusions in this report are those of the authors and do not necessarily represent the official position of the Centers for Disease Control and Prevention.