NIOSH is phasing out the use of the Los Alamos National Laboratory (LANL) Panels and updated Standard Testing Procedure (STP) TEB-APR-STP-0005-05a-06, Determination of Qualitative Isoamyl Acetate (IAA)pdf icon Facepiece Fit, Air-Purifying Respirators, to include use of the NIOSH Bivariate Panel (NIOSH Panel). The NIOSH Panel’s anthropometric limits and individual panel cells (1-10) are shown in Figure 1. The population cell distribution of the NIOSH Panel is given in Table 1, based on an 18- member panel.

Beginning February 1, 2019, NIOSH will implement use of the NIOSH Panel during evaluation of all new approvals of air-purifying respirators (half mask and full-facepiece, excluding non-powered, particulate only air-purifying respirators). These types of approval projects, accepted in the NIOSH Division Electronic Information Management System (DEIMS) on or after February 1, 2019, will be evaluated using the NIOSH Panel and the updated STP. A new approval may include a respirator facepiece configuration previously approved as part of a different respirator approval configuration. Applicants may continue to use the LANL panels to generate pre-submission test data however, NIOSH recommends using the procedure outlined in the updated STP.

Respirators previously approved following testing with LANL Panels continue to be NIOSH-approved respirators. When these approvals are submitted for an extension of approval, and the application requires human subject testing, the respirator will be evaluated using the NIOSH Panel and if a pass is not achieved, the testing will be repeated using the relevant LANL Panel.

After December 31, 2019, when respirators previously approved following testing with LANL Panels are submitted for an extension of approval requiring human subject testing and do not pass the NIOSH Panel, they will not be reevaluated using the LANL Panel.

Certified product audit testing including the use of the anthropometric panels will allow the use of the panel used during the original testing for the approval until December 31, 2019. For example, if the half-facepiece LANL panel was used during the original testing, the half-facepiece LANL panel will be used for certified product audit testing until December 31, 2019. 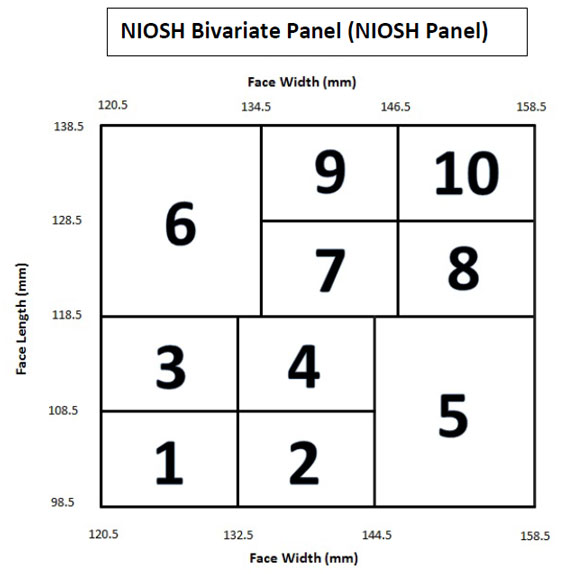 Table 1: NIOSH Panel cell designations, population distribution, and number of test subjects per cell, based on an 18-member panel

Appendix A – BACKGROUND and SUPPLEMENTAL INFORMATION

Prior to Febuary 1, 2019, the NIOSH Respirator Approval Program used human test subjects, identified by the LANL Panels (Figures A1 and A2) to assess fit in accordance with 42 Code of Federal Regulations Part 84. Use of the LANL Panels to assess fit of air-purifying respirators was included in the May 18, 2005 NIOSH Letter to All Respirator Manufacturers, and NIOSH TEB-APR-STP-0005-5a-06. Revision 2.0 (20 March 2008), Determination of Qualitative Isoamyl Acetate (IAA) Facepiece Fit, Air-Purifying Respirators. 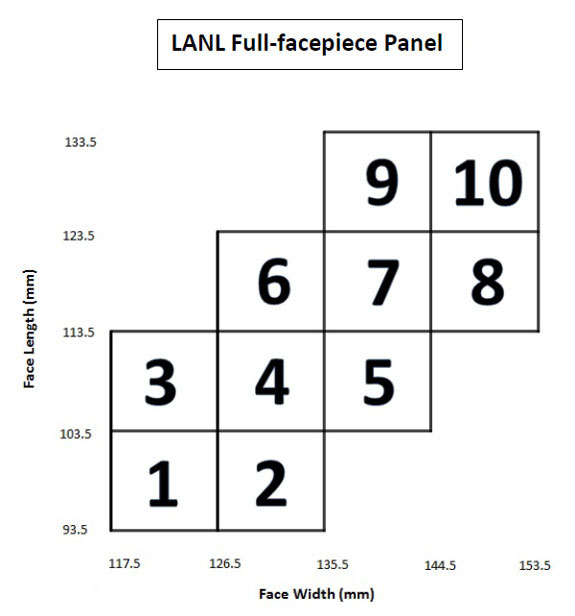 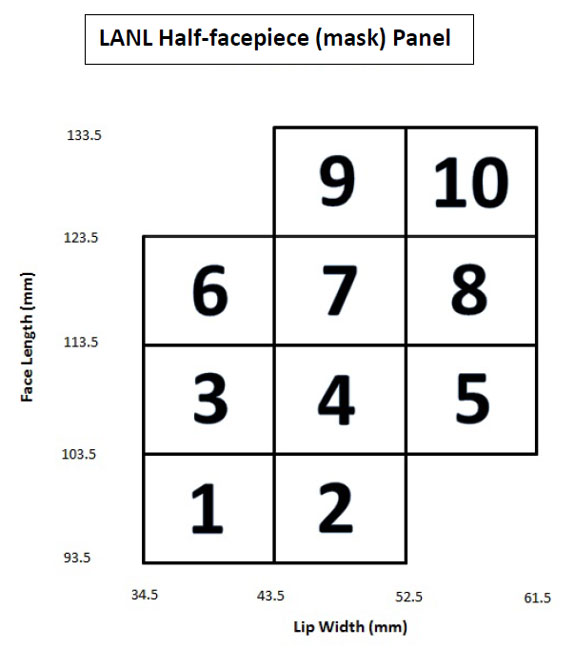 The October 30, 2009 NIOSH notice of proposed rulemakingpdf icon – Total Inward Leakage Requirements for Respirators (NIOSH Dockets 36 and 137, RIN 0920-AA33) included a reference to the National Academies of Sciences, Engineering, and Medicine study Assessment of the NIOSH Head-and-Face Anthropometric Survey of U.S. Respiratory Usersexternal icon. The notice summarized; It is documented in testing and agreed by reviewers that the proposed panel represents a substantial improvement over its predecessor panel and should be implemented (p 56144, Federal Register, Vol. 74, No. 209pdf icon). The use of the panel in the 2012 NIOSH inter-panel variability study and implementation of the panel in the NIOSH Respirator Approval Program was discussed during two webinars completed in July and August of 2013 (webinar slides and recordings are available in NIOSH Docket 250 – Development of Inward Leakage Standards for Half-Mask Air-Purifying Particulate Respirators).

Additionally, NIOSH received comments to CDC-2013-0017 NIOSH Docket 250 (p 54432 Federal Register, Vol. 78, No. 171, September 4, 2013pdf iconexternal icon). Stakeholders responded to questions asked about development of an inward leakage standard for half-mask air-purifying particulate respirators and the use of anthropometric panels to assess respirator fit. The commenters generally supported using a single bivariate panel for performance testing as part of the NIOSH Respirator Approval Program. While some responders indicated concerns about the differences between the LANL Panels and the NIOSH Panel, they tended to support the use of the more recently developed NIOSH Panel.

Respirator manufactured in one unique size

According to the NIOSH May 18, 2005 Letter to All Manufacturers, Air-Purifying Fit Test Subject Selection ten subjects, one from each cell, were tested and one failure permitted (Table A1). NIOSH considered retaining this procedure and modifying the STP to include the use of the NIOSH Panel and remove the use of the LANL Panels. However, after several discussions about the multiple panel distributions and panel sizes used (as given in Tables A1 and A2) NIOSH decided to consider a more streamlined approach, and completed a statistical analysis to help identify a better panel size to be used when testing any model of respirator.

Table A1. Number of subjects selected using LANL panels during isoamyl acetate testing of a respirator designed and manufactured in one unique size to fit persons with various facial shapes and sizes.

Table A2. Number of subjects selected using LANL panels during isoamyl acetate testing of a respirator manufactured in one unique size as designated by the manufacturer. No failures were allowed.

Table A3. Number of subjects selected using LANL panels during isoamyl acetate testing of a respirator designed and manufactured in two unique sizes to fit persons with various facial shapes and sizes.

NIOSH NPPTL considered the identification and use of overlapping subject cell designations during the implementation of the NIOSH Panel. Using the anthropometric data collected [Zhuang 2007], as illustrated in Figure A3, the “overlapping cells” identified where a subject may be considered a small/medium subject or a medium/large subject. Discussions considered how the new panel “fits” over the LANL full-facepiece panel and determined the overlaps may occur in NIOSH Cell 2 (small and medium), Cell 5 (medium and large), Cell 6 (small and medium) and Cell 9 (medium and large). Figure A3. NIOSH Panel (outlined in black) and the LANL Panel Full-facepiece (outlined in red) with individual subject anthropometric data (given in blue).

The true fail rate was varied between 1%, 5%, 15% and the population was set to be 100,000 “people.” The true population fail rate means the percentage of the population that would not fit this “sample” or “respirator.” For example, in the case of the 15% rate, using 100,000 samples, 15% or 15,000 are designated as a “1” or “failure” in the Bernoulli distribution and 85% are designated as a “0” or a non-failure. Seventy-five distinct random samples were taken for each member panel size studied. Member panel sizes varied between 5, 10, 12, 18, and 24. Table 4, column C reports the average observed fail rate for each of the sample sizes and each of the true population fail rates over 75 random samples with replacement.

Table A4 column D shows the standard deviation of the observed fail rates across the 75 samples for each sample size. This statistic shows the sampling variability and lower variability in the sampling distribution is better. As variability decreases there is more confidence that each individual sample comes as close as possible to estimating the true population fail rate.

Based on the analysis, NIOSH NPPTL will allow four failures when testing an 18-member panel during evaluations of respirators manufactured in one, two, or three unique sizes, since approximately 100% of the individual samples will result in four or fewer failures. Similarly, four failures will be allowed when testing a 21 or 24-member panel used during evaluations of respirator designed and manufactured in four or five unique sizes, respectively.