Who is NIOSH and what do they have to do with respirators?

The National Institute for Occupational Safety and Health (NIOSH) is the federal agency responsible for conducting research and making recommendations to prevent workplace injuries and illnesses. As part of the Centers for Disease Control and Prevention (CDC) within the Department of Health and Human Services (HHS), NIOSH helps assure safe and healthful working conditions by conducting scientific research, developing guidance and authoritative recommendations, disseminating information, and responding to requests for workplace health hazard evaluations.

The National Personal Protective Technology Laboratory (NPPTL) is the division within NIOSH responsible for the certification and approval of respirators for use in occupational settings, including those under the jurisdiction of the Occupational Safety and Health Administration (OSHA). This authority is implemented through regulations in Part 84 of Title 42 of the Code of Federal Regulations (42 CFR 84).

What is a respirator?

A respirator is a personal protective device that is worn on the face, covers at least the nose and mouth, and is used to reduce the wearer’s risk of inhaling hazardous airborne particles (including dust particles and infectious agents), gases, or vapors. Respirators are considered as a “last line of defense” in the occupational hierarchy of controls. They are recommended when engineering and administrative controls are not feasible or sufficient to control the hazard, or until these other controls can be put in place.

Respirators protect the user in two basic ways; either by filtering contaminated ambient air or by providing a clean source of air. Respirators that remove contaminants from the air are called air-purifying respirators (APRs). APRs include particulate respirators, which filter out airborne particles, and “gas masks,” which remove gases and vapors from ambient air.

The classification of air-purifying respirators can be further subdivided into three categories:

What is an N95 respirator?

The NIOSH respiratory protection approval regulation (42 CFR 84) defines the term “N95” to refer to a filter class, not a respirator. However, many filtering facepiece respirators have an N95 class filter and many people refer to them, and have come to know them, as N95 respirators. A filtering facepiece respirator that filters out at least 95% of airborne particles during “worst case” testing using a “most-penetrating” sized particle is given a 95 rating.1 There are nine classes of NIOSH-approved particulate filtering respirators available at this time. 95% is the minimal level of filtration that will be approved by NIOSH. The N, R, and P designations refer to the filter’s oil resistance as described in the table below.

If a particulate filtering facepiece respirator does not have these markings as identified above and does not appear on one of these lists, it has not been certified by NIOSH for occupational use. 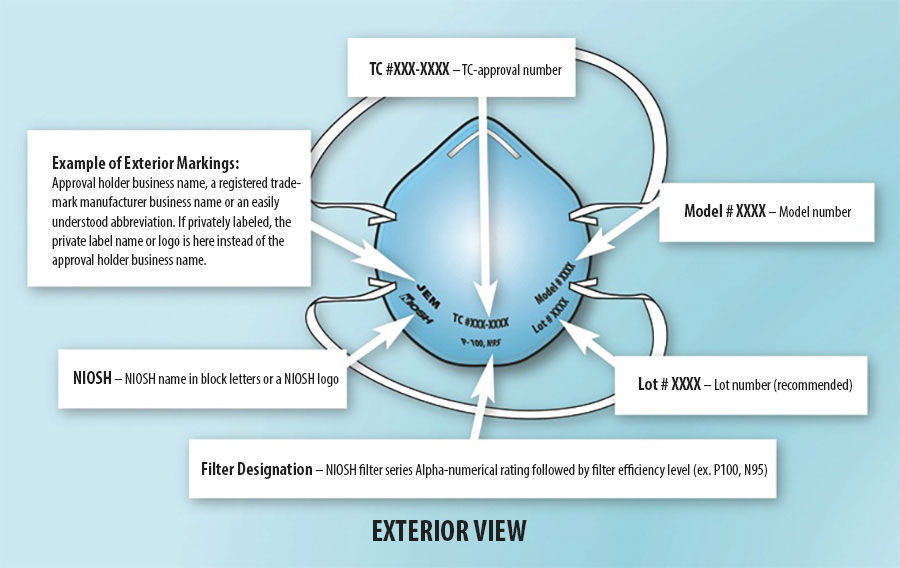