How many people receive an HIV diagnosis each year in the United States and 6 dependent areas?

In 2018, 37,832 people received an HIV diagnosis in the United States and dependent areas.a The annual number of new diagnoses decreased 9% from 2010 to 2016 in the 50 states and the District of Columbia.

a American Samoa, Guam, the Northern Mariana Islands, Puerto Rico, the Republic of Palau, and the US Virgin Islands.

How many people have HIV in the United States?

An estimated 1.1 million people in the United Statesa had HIV at the end of 2016, the most recent year for which this information is available. Of those people, about 14%, or 1 in 7, did not know they had HIV.

a In the 50 states and the District of Columbia.

How does HIV affect different groups of people?

There are different ways to answer this question.

In 2018, gay, bisexual, and other men who have sex with mena accounted for 69% of all new HIV diagnoses in the United States and 6 dependent areas.b,c In the same year, heterosexuals made up 24% of all HIV diagnoses.

New HIV Diagnoses in the US and Dependent Areas by Transmission Category, 2018 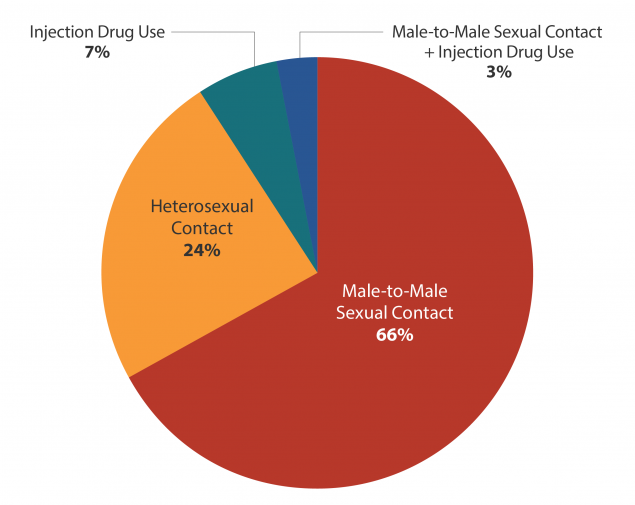 New HIV Diagnoses in the US and Dependent Areas by Race/Ethnicity, 2018 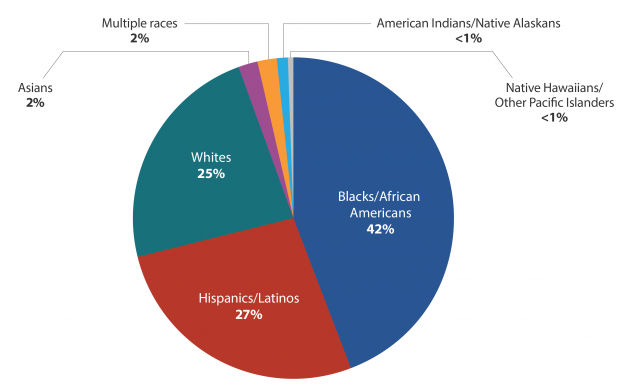 The most affected subpopulation is African American gay and bisexual men.

New HIV Diagnoses in the US and Dependent Areas for the Most-Affected Subpopulations, 2018

CDC’s fact sheets explain the impact of HIV on various populations in the United States.

a The term male-to-male sexual contact is used in CDC surveillance systems. It indicates a behavior that transmits HIV infection, not how individuals self-identify in terms of their sexuality. This web content uses the term gay and bisexual men.
b American Samoa, Guam, the Northern Mariana Islands, Puerto Rico, the Republic of Palau, and the US Virgin Islands.
c Includes infections attributed to male-to-male sexual contact and injection drug use (men who reported both risk factors).
d Black refers to people having origins in any of the black racial groups of Africa, including immigrants from the Caribbean, and South and Latin America. African American is a term often used for Americans of African descent with ancestry in North America. Individuals may self-identify as either, both, or choose another identity altogether. This web content uses African American, unless referencing surveillance data.
e Hispanics/Latinos can be of any race.

How many deaths are there among people with HIV?

In 2017, there were 16,350 deaths among adults and adolescents with diagnosed HIV in the United States and 6 dependent areas.a These deaths may be due to any cause.

a American Samoa, Guam, the Northern Mariana Islands, Puerto Rico, the Republic of Palau, and the US Virgin Islands.

Do some parts of the country have more HIV than other parts?

Yes. HIV is largely an urban disease, with most cases occurring in metropolitan areas with 500,000 or more people. The South has the highest number of people living with HIV, but if population size is taken into account, the Northeast has the highest rate of people living with HIV. (Rates are the number of cases of disease per 100,000 people. Rates allow comparisons between groups of different sizes.)

What about HIV around the world?

HIV disease continues to be a serious health issue for parts of the world. Worldwide, there were about 1.7 million new cases of HIV in 2018. About 37.9 million people were living with HIV around the world in 2018, and 23.3 million of them were receiving medicines to treat HIV, called antiretroviral therapy (ART). An estimated 770,000 people died from AIDS-related illnesses in 2018. Sub-Saharan Africa, which bears the heaviest burden of HIV and AIDS worldwide, accounts for about 61% of all new HIV infections. Other regions significantly affected by HIV and AIDS include Asia and the Pacific, Latin America and the Caribbean, and Eastern Europe and Central Asia.

CDC’s Global AIDS website explains what CDC is doing in the global fight against HIV.