On July 1, 1946, the Communicable Disease Center opened its doors, occupying only a single floor of a small building in Atlanta. Its primary mission was simple yet highly challenging: prevent malaria from spreading across the nation. Over 70 years, this small agency grew into the Centers for Disease Control and Prevention (CDC), the preeminent public health institution for the United States. CDC is widely recognized as the world’s premiere health promotion, prevention, and preparedness agency. It has also become a model for countries around the world looking to develop a sustainable National Public Health Institute (NPHI).

Since 2011, CDC has worked with ministries of health and other partners to help over 25 countries develop and strengthen their own NPHIs.

Around the world, NPHIs have varying names and differ in size and scope, but their purpose remains the same—improving public health around the world by being an institutional home for scientific excellence and partnership.

A Home for Public Health

NPHIs play a pivotal role in a country’s ability to prevent, detect, and respond to potential health threats. They serve as the “home” for a country’s public health activities. Creating a public health institute helps countries more effectively collect and use data, as well as implement and monitor science-based programs. Ultimately, NPHI coordination and leadership can save money and protect lives.

In 2018, the President of Nigeria signed legislation to officially name the Nigeria Centre for Disease Control (NCDC) as the country’s NPHI—an act Dr. Chikwe Ihekweazu, the Director General of the NCDC, acknowledges as critical to its role in global health security. He said, “the individual components of an outbreak response, whether an emergency operation center, laboratory, surveillance system, or risk communication—none of these components would lead to greater preparedness if they did not operate within an institution with a mandate to act.”

NPHIs can also promote lasting impact. Training the public health workforce, establishing new laboratory diagnostic capabilities, or modernizing information systems represent a substantial resource investment by countries as well as partner organizations. NPHIs can sustain these investments, both those developed within an NPHI as well as those for a specific program like HIV or malaria. Through its role in planning and managing resources across the public health sector, an NPHI may support the continuation or expansion of disease-specific initiatives (for example, broadening the scope of a functional HIV surveillance system).

Strong NPHIs can also serve as a foundation to address international public health priorities. NCDC has contributed its national experiences to develop important global NPHI resources, including the Staged Development Tool, establishment and legislative frameworks from the Africa Centers for Disease Control and Prevention (Africa CDC), and a best practices series collected by the International Association of National Public Health Institutes (IANPHI). The National Institute of Health (INS), Colombia’s NPHI, is widely recognized as a national and regional leader in Latin America. In this critical role, INS has led trainings and discussions with neighboring countries about public health concerns related to the migrant crisis that began in Venezuela. 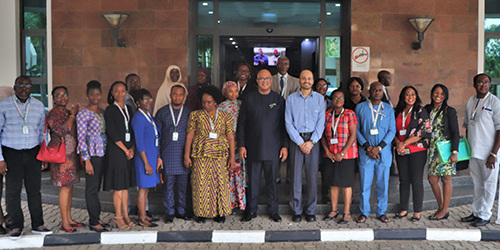 In addition to network organizations such as IANPHI, NPHIs support each other in a range of topics, from establishment to specific public health technical areas. The Zambia National Public Health Institute (ZNPHI) has hosted several countries (including Botswana, Malawi, and Zimbabwe) to share development process experiences and actively support NPHI initiatives in Southern Africa. NCDC and Pakistan’s Institute of Public Health have shared lessons learned about improving Field Epidemiology Training Programs, which provide skilled workforce to support NPHI goals.

Since 1946, CDC has evolved from its malaria-fighting roots into a leading public health institution supporting countries’ efforts to develop their own NPHIs. When countries can address their own public health priorities through an NPHI, they build on results achieved with current U.S. financial and technical support, while minimizing current and future reliance on external assistance. By investing in NPHIs at this critical juncture, CDC can ensure that global health security and disease-specific program progress are sustained around the world.