Administering the oral polio vaccine to a child as part of the National Immunization Plus Days in April 2018 in Nigeria. Photo: Tamuno-Wari Numbere

When Ebola ravaged West Africa during 2014-2016, the need for a continent-wide public health agency—an idea conceived years prior—became an urgent priority for the African Union (AU).

“AU member states tasked the AU Commission to accelerate the establishment and operationalization of the Africa Centres for Disease Control and Prevention (Africa CDC), and the concept of an Africa-owned technical arm, now known as Africa CDC, to ensure health security on the continent, was born,” said John Nkengasong, director of the Africa CDC. 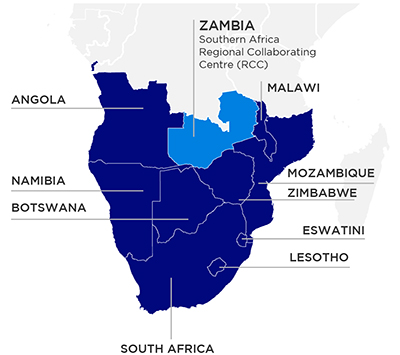 In just two years, the Zambia-based Southern African RCC (SA-RCC) has made significant progress towards integrating and harnessing public health assets in the 10 countries in that region: Angola, Botswana, eSwatini, Lesotho, Malawi, Mozambique, Namibia, South Africa, Zambia, and Zimbabwe. The SA-RCC, hosted by the Zambia National Public Health Institute (ZNPHI), is paving the way by building a regional network for coordinated outbreak response, information sharing, and other cross-border public health priorities in the region.

ZNPHI is a new NPHI, launched in 2015, and according to Nkengasong, “has taken off like a bullet.” He attributes ZNPHI’s success to the leadership of the interim SA-RCC coordinator and Zambia NPHI director, Victor Mukonka, along with the efforts of Zambia’s Ministry of Health. “Zambia has embraced its role in the RCC and is fortunate to have strong support from our country’s leaders in our regional role to help ensure global health security for the continent’s citizens,” said Mukonka. 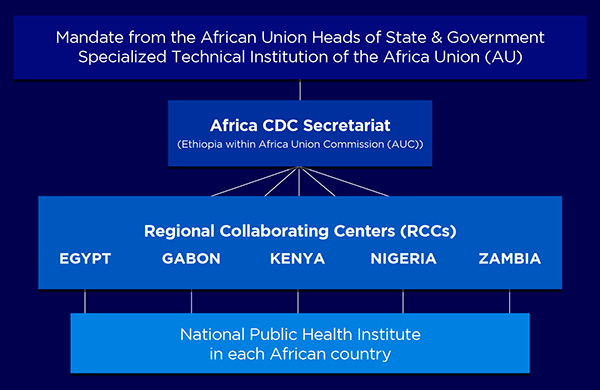 In 2017, Africa CDC established the Extension for Community Healthcare Outcomes (ECHO) platform in Southern Africa to improve data and information-sharing in real time, which has facilitated timely regional preparedness and response. SA-RCC uses the platform for regular discussions about outbreak preparedness and to leverage expertise in the region to support response efforts. The ECHO platform facilitated regional communication during the 2017-2018 listeriosis outbreak in South Africa.

Improved information sharing has resulted in increased requests to SA-RCC and Africa CDC for technical assistance from countries in the region. In 2018, during outbreaks of cholera in Zambia, Zimbabwe, and Malawi, SA-RCC facilitated regional surge capacity. For the Malawi outbreak, the SA-RCC coordinated needs assessments, trainings on laboratory and data management, and laboratory reagent procurement. SA-RCC also mobilized experts in the region to support response to Ebola outbreaks in the Democratic Republic of the Congo in 2018-2019.

Outbreaks of Ebola and other infectious diseases underscore the importance of coordinated responses and the value of RCCs to global health security. CDC will continue to collaborate with Africa CDC to strengthen the continent’s response to disease threats at national, regional, and continental levels—all of which contribute to improved health security globally.