“A Culture of Responding:” Training Course Pays Off for Mozambique

Provincial Medical Officers during the two-week training, supported by CDC and IANPHI

A request for help might not seem like a significant milestone for a country’s public health system. But in the case of a cholera outbreak in Tete Province in early 2017, it represented an important step forward for Mozambique.

A critical link in the chain

PMOs are critical to identifying and responding to outbreaks. Mozambique has one PMO assigned to each of its 11 provinces (including the City of Maputo). The PMO’s role includes managing reporting of public health information from local to provincial to national levels; coordinating public health response to health threats at the provincial level; and implementing public health interventions, among other responsibilities. However, PMOs are often appointed with only a few years of clinical experience under their belts — and very little understanding of the public health concepts and skills critical to their role in disease surveillance.

Dr. Stélio Dimande, PMO from Inhambane Province, who attended the INS training, notes that he was appointed to his PMO role without any prior investigation experience. “In 2008 or 2009, there was an outbreak of cholera, and at that time I did not know how to deal with the outbreak. I just heard from my colleagues what should be done,” he said.

According to INS Director Dr. Ilesh Jani, this lack of public health understanding at the provincial level led to inaction during past outbreaks, as well as overdependence on national-level support. Mozambique had an increasing need for PMOs and other health professionals to be trained in leadership, early warning, outbreak management, and use of epidemiological tools — all of which are core functions of an NPHI.

An idea that became a reality 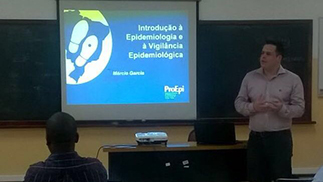 Epidemiologists from the Brazilian Association of Epidemiology Professionals (ProEpi) facilitated the training. ProEpi is a long-time partner of INS in Mozambique.

During the workshop, participants gained skills in critical analysis and rapid reporting; evaluation of surveillance data; using routine data for action; field investigation; the role of laboratories during outbreaks and emergencies; biosafety and biosecurity in the management of outbreaks and emergencies; health communication; management and leadership; and drug supply chain management.

After the program, many PMOs noted that some of their previous understanding about outbreaks had been incorrect. According to Baltazar, “Some of the PMOs thought they knew how the outbreak investigation worked [before the training], but during the training, they realized that they didn’t — and that they weren’t reporting correctly.”

After participating in the workshop, cholera outbreaks in early 2017 further put these lessons to the test. In Tete Province, an assessment of the risk that the outbreak would spread led to a request for over 700,000 doses of oral cholera vaccine from WHO’s International Coordination Group (ICG). A widespread vaccination campaign was then conducted in the province, offering a clear example of an outbreak investigation leading to a public health intervention for its control.

Moving forward, IANPHI and CDC will help build upon the PMO training through support for additional capacity building at the provincial and national levels. All of this will contribute to developing a high-performing disease monitoring system that works in collaboration with INS to detect potential health threats from the ground up.