A Colombian lab worker tests samples as the exercise progresses.

Across the Globe:
Cholera at a Wedding 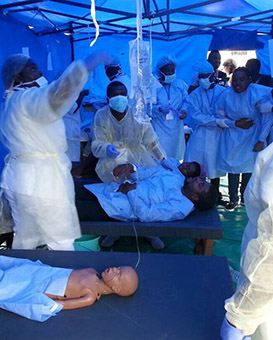 Hospital workers treat their "sick" patients during the exercise.

In September 2017, Cameroon conducted the first large-scale international public health response exercise in Africa, working with experts from across CDC and partners to stage a complex simulation of a cholera outbreak that began at a wedding. As actors playing sick wedding guests turned up at hospitals, Cameroon’s responders swung into action, doing their jobs exactly as if the scenario were real.The week-long exercise challenged Cameroon’s outbreak response capabilities, testing the country’s improved laboratories; its ability to share information in real time; the performance of its new Public Health Emergency Operations Center; and other systems that have been installed to better prevent, detect, and respond to disease outbreaks.

With a visit from Pope Francis expected in several cities across Colombia in September, responders needed to make sure they could effectively coordinate action in the event of an emergency.

Exercising the country’s new Public Health Emergency Operations Center (PHEOC), which had just opened in January 2017, was an important step in preparing the country for the throngs of visitors.

Exercises are a key part of global health security, providing valuable lessons and revealing gaps before an emergency occurs.

In July 2017, Colombia worked with CDC to put its new PHEOC to the test by simulating a real-life emergency to make sure its responders are ready. 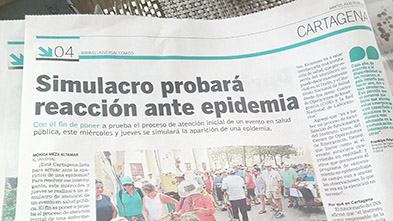 A news headline in Colombia announces the simulation exercise.

The full-scale exercise took place from July 26-28 and had two components: activation of the PHEOC in Bogota and a field investigation in Cartagena. The scenario included suspected cases of cholera in the port city of Cartagena – an event that would warrant the immediate activation of Colombia’s PHEOC.

Lessons learned from Colombia’s exercise were put into action when the PHEOC was activated during the Pope’s September visit.

The PHEOC is part of a wider Emergency Management System in which many systems work hand-in-hand to rapidly respond to public health events of national and international concern. The successful launch of the PHEOC is the culmination of years of planning between INS and CDC’s Emergency Response and Recovery Branch and National Public Health Institute program.

Colombia’s dedication to public health preparedness sets an example for other countries who are strengthening their own systems to enhance global health security.

Building on more than 70 years of experience as America’s National Public Health Institute (NPHI), CDC is helping countries around the world develop and strengthen their own organized, well-functioning NPHIs to protect the public’s health and contain disease close to the source. Over 5 billion people across five continents are reached by various NPHIs, which provide leadership and coordination for public health at the national level.