At the visit, President Santos commended INS for its many achievements, saying that developing a national public health institute “is a slow, difficult process, done little by little… People do not realize the progress that Colombia has had in terms of health.” 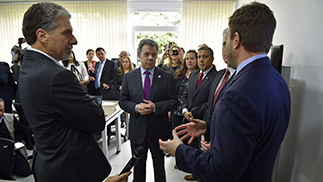 The new PHEOC is the result of a partnership between INS, CDC’s National Public Health Institute (NPHI) program, CDC’s Emergency Response and Recovery Branch (ERRB), and the International Association of National Public Health Institutes (IANPHI). The partnership included designing and outfitting a space to serve as the PHEOC. ERRB’s Global Response Preparedness Team has also worked with INS to help strengthen emergency preparedness and capacity to respond to public health events. CDC continues a fruitful collaboration with INS on many fronts.

President Santos acknowledged the importance of this partnership, particularly as the country responded to Zika. “We are strengthening [public health emergency operations capacity] in partnership… with the United States, with whom we have been working [for a long time], and that was reinforced by the challenge that arose with Zika. Zika caught us all by surprise, and we had to react.”

In closing, President Santos remarked, “To all those who have been working in this Institute for the past 100 years, let it be a day today to be proud of what we have done – you must feel very proud — but also to reaffirm our commitment to continue seeking excellence, continue improving the indicators, and continue to provide better service to Colombian citizens.”