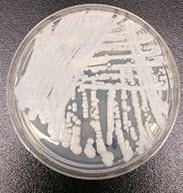 All types of microbes—bacteria, viruses, fungi, and parasites—have the ability to develop resistance to the drugs created to destroy them, becoming drug-resistant organisms.

Because most Candida do not spread from person to person, healthcare providers usually do not think of Candida as spreading from patient to patient. However, what is different and particularly scary about Candida auris (C. auris) is that it can last on skin and healthcare surfaces, like bedrails and chairs, for a long time—allowing it to spread from person to person in healthcare settings. C. auris often is not killed by commonly used antifungal drugs, making infections difficult to treat and frequently deadly. Most strains detected so far have been resistant to at least one drug, and more than one-third were resistant to two drug classes. Particularly concerning, some strains have been found to be resistant to all three drug classes used to treat fungal infections. This level of resistance has never been seen in other Candida infections.

An additional challenge is that specialized laboratory methods are needed to accurately identify C. auris. Conventional or outdated lab techniques in healthcare facilities often lead to misidentification and inappropriate treatment of C. auris, making it difficult to control its spread in healthcare settings. CDC and its Antibiotic Resistance Laboratory Network (AR Lab Network) regional laboratories are filling this detection gap by providing accurate identification methods and susceptibility testing until healthcare facilities can begin to adopt these new methods.

Healthcare providers should be aware of the challenges in identifying this organism because it can easily be misidentified as another type of Candida infection.

Following the proactive clinical alert to U.S. facilities, CDC was notified of 13 U.S. cases of C. auris infection by November 2016 and investigated together with several state and local health departments.  The details of the first seven U.S. cases reported, which occurred in four states between May 2013 and August 2016, are described in CDC’s November 11, 2016 Morbidity and Mortality Weekly Report (MMWR). All patients had serious medical conditions and had been hospitalized an average of 18 days when C. auris was identified. Four of the seven patients died, but it is not clear if the deaths were associated with the C. auris infection or other existing health conditions. Cases from June 2016 to May 2017 are described in CDC’s May 18, 2017 MMWR. As new cases are reported to CDC and confirmed, they are updated on CDC’s C. auris website.

CDC is making transformative improvements using resources provided by Congress in fiscal year 2016 to further identify and respond to new and known drug resistance threats with activities like:

CDC’s gold-standard laboratories have analyzed hundreds of international samples of C. auris and supported several investigations in the U.S. and abroad. Key findings include:

CDC believes that we are still in the window of opportunity to stop the spread of C. auris in the United States. To do so will require an aggressive response to cases and a clearer understanding of the most effective ways to prevent transmission.

The challenge of emerging drug resistant threats like C. auris highlights the need for an urgent, comprehensive federal, state, local, and international public health response and the importance of CDC’s Antibiotic Resistance Solutions Initiative. The timely investments in the AR Solutions Initiative allow CDC to rapidly detect, investigate, and respond to emerging threats, like C. auris; make recommendations to prevent resistant infections from occurring and spreading across healthcare settings and the community; and support the development of new diagnostics and drugs to test, treat, and prevent infections, and save lives.