Trichinellosis (trichinosis) is caused by nematodes (roundworms) of the genus Trichinella. In addition to the classical agent T. spiralis (found worldwide in many carnivorous and omnivorous animals), several other species of Trichinella are now recognized, including T. pseudospiralis (mammals and birds worldwide), T. nativa (Arctic bears), T. nelsoni (African predators and scavengers), T. britovi (carnivores of Europe and western Asia), and T. papuae (wild and domestic pigs, Papua New Guinea and Thailand). Trichinella zimbabwensis is found in crocodiles in Africa but to date there are no known associations of this species with human disease.

Depending on the classification used, there are several species of Trichinella: T. spiralis, T. pseudospiralis, T. nativa, T. murelli, T. nelsoni, T. britovi, T. papuae, and T. zimbabwensis, all but the last of which have been implicated in human disease. Adult worms and encysted larvae develop within a single vertebrate host, and an infected animal serves as a definitive host and potential intermediate host. A second host is required to perpetuate the life cycle of Trichinella. The domestic cycle most often involved pigs and anthropophilic rodents, but other domestic animals such as horses can be involved. In the sylvatic cycle, the range of infected animals is great, but animals most often associated as sources of human infection are bear, moose and wild boar.

Trichinellosis is caused by the ingestion of undercooked meat containing encysted larvae (except for T. pseudospiralis and T. papuae, which do not encyst) of Trichinella species

. After exposure to gastric acid and pepsin, the larvae are released from the cysts

. Females are 2.2 mm in length; males 1.2 mm. The life span in the small bowel is about four weeks. After 1 week, the females release larvae

that migrate to striated muscles where they encyst

. Diagnosis is usually made based on clinical symptoms, and is confirmed by serology or identification of encysted or non-encysted larvae in biopsy or autopsy specimens.

Worldwide. Most common in parts of Europe and the United States.

Encysted larvae of Trichinella in tissue, stained with hematoxylin and eosin (H&E).

Adult Trichinella spp. reside in the intestinal tract of the vertebrate host; larvae can be found encapsulated in muscle tissue. Diagnosis is usually made serologically or based on observation of the larvae in muscle tissue following biopsies or autopsies. 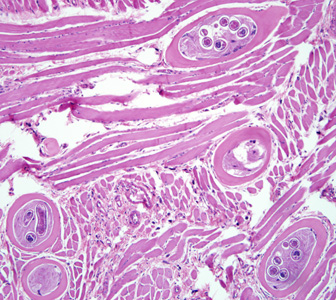 Figure A: Encysted larvae of Trichinella sp. in muscle tissue, stained with hematoxylin and eosin (H&E). The image magnification is 200x. 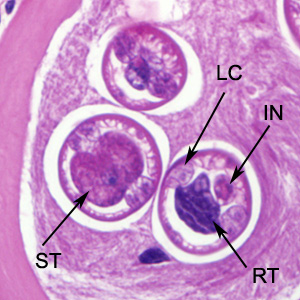 Figure E: Higher-magnification of the larvae in Figure C. Shown in these cuts are a nucleated stichocyte (ST), prominent lateral chords, or bacillary bands, (LC), immature reproductive tubes (RT), and the intestine (IN). Image captured at 1000x magnification. 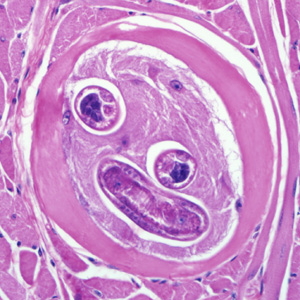 Figure B: Encysted larvae of Trichinella sp. in muscle tissue, stained with hematoxylin and eosin (H&E). The image magnification is 400x. 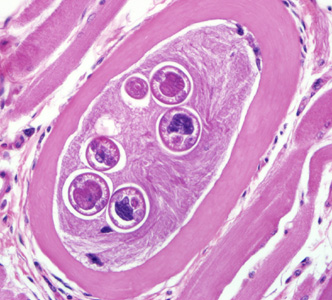 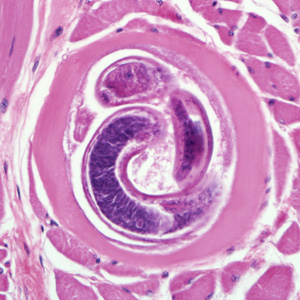 Figure D: Encysted larvae of Trichinella sp. in muscle tissue, stained with hematoxylin and eosin (H&E). Image was were captured at 400x magnification.
Trichinella larvae in tongue tissue of a rat, stained with H&E. 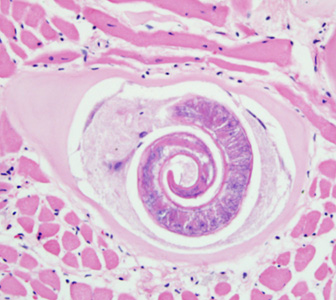 Figure A: Trichinella larva in tongue muscle of a rat, stained with hematoxylin and eosin (H&E). Image was captured at 400x magnification. 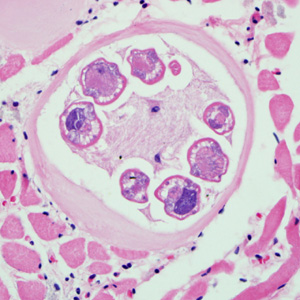 Figure B: Trichinella larva in tongue muscle of a rat, stained with hematoxylin and eosin (H&E). Image was captured at 400x magnification.

Larvae of Trichinella from bear meat. 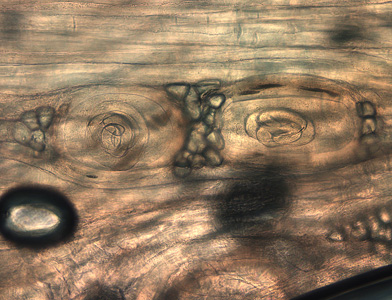 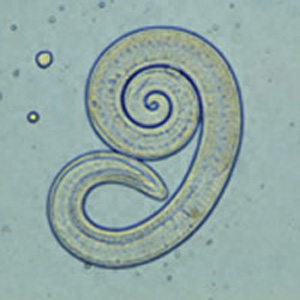 Figure E: Larva of Trichinella liberated from bear meat. This larva is from a different case than those shown in Figures A-D. 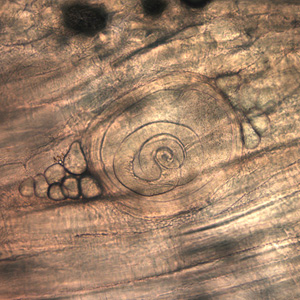 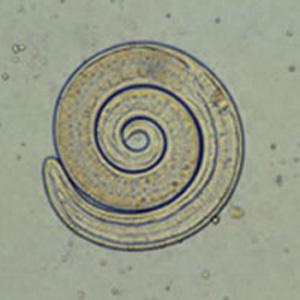 Figure F: Larva of Trichinella liberated from bear meat. This larva is from a different case than those shown in Figures A-D. 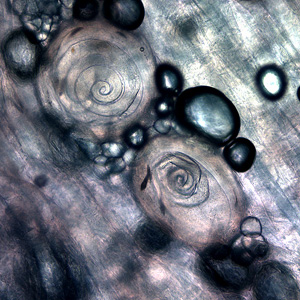 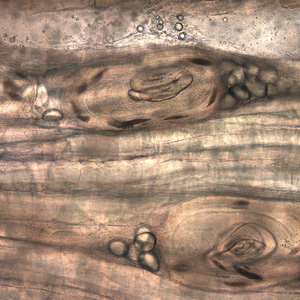 The suspicion of trichinellosis (trichinosis), based on history, clinical symptoms, and eosinophilia, can be confirmed by specific diagnostic tests, including antibody detection, muscle biopsy, and microscopy.

Immunodiagnostic tests currently available in the U.S. include enzyme immunoassays (EIA) that detect Trichinella-specific antibodies. EIAs utilize antigen preparations that may be crude extracts prepared from homogenates of T. spiralis muscle larvae or excretory-secretory (ES) products produced by cultured larvae. The TSL-1 group of larval secretory antigens are conserved in all species/isolates of Trichinella and thus can be used to detect infection in animals or people infected with any of the types of Trichinella currently recognized. Positive reactions are detectable at some time during infection in serum samples of 80% to 100% of patients with clinically symptomatic trichinellosis (trichinosis). Antibody levels are often not detectable until 3 to 5 weeks post-infection, well after the onset of acute-stage illness. Antibody development is also affected by the infecting dose of larvae: the higher the infecting dose, the faster the patient’s antibody response will develop. Multiple serum specimens should be drawn several weeks apart to demonstrate seroconversion in patients whose initial specimen was negative. IgG, IgM, and IgE antibodies are detectable in many patients; however, tests based on IgG antibodies are most sensitive. Antibody levels peak in the second or third month post-infection and then decline slowly for several years. In our experience at CDC, EIAs with ES antigens detect antibodies earlier than bentonite flocculation (BF) in 25% of serum specimens from patients with acute infection, but EIAs also remain positive for longer periods after infection than the BF, and are reactive in a larger proportion of persons with no clinical evidence of trichinellosis.

Treatment information for trichinellosis can be found at: https://www.cdc.gov/parasites/trichinellosis/health_professionals/index.html#tx