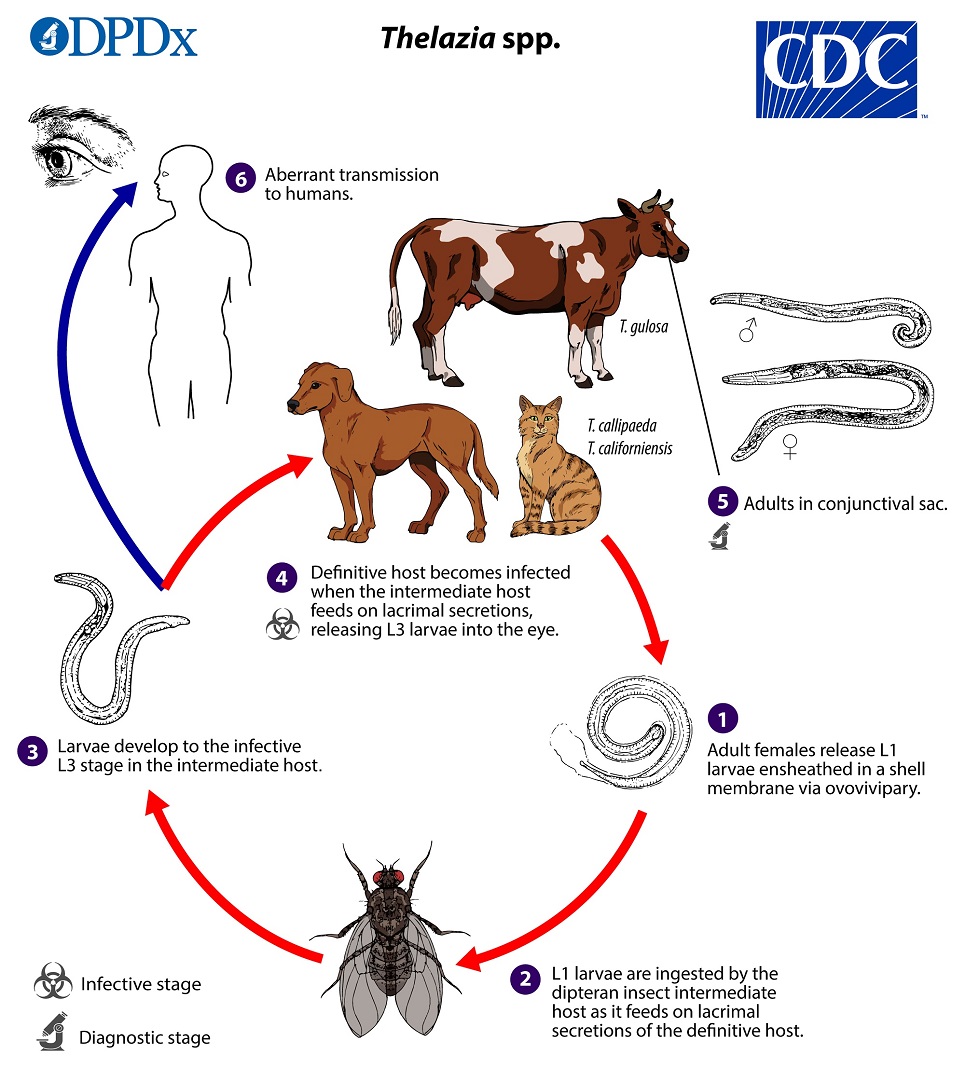 . L1 larvae are ingested by the face fly intermediate host during feeding on tears and lacrimal secretions

. In the digestive tract of the intermediate host, L1 larvae become exsheathed and invade various host tissues, including the hemocoel, fat body, testis, and egg follicles where they develop in capsules. The encapsulated larvae molt twice to become infective L3 larvae

and become adults after about a month and two additional molts

. Humans may also serve as aberrant definitive hosts following exposure to an infected fly intermediate host in the same manner

Both wild and domestic canids are considered the primary definitive hosts for Thelazia callipaeda. Natural infections have also been detected in felids, mustelids, and lagomorphs. T. californiensis infections have been reported in numerous mammals, mostly from wild and domestic canids, but also others (e.g. felids, bears, cervids, sheep, jackrabbits (Lepus californicus)). Some of these could possibly represent misidentifications of species. T. gulosa is a parasite of cattle, and occasionally other large ruminants.

Intermediate hosts or vectors for Thelazia spp. are drosophilid flies that feed on lacrimal secretions (lacrimophagous), and associations are parasite-specific. For example, Phortica (=Amiota) variegata and P. (=A.) okadai are the primary intermediate hosts for T. callipaeda. Fannia spp., such as Fannia benjamini (canyon fly) and F. canicularis (lesser house fly), are vectors for T. californiensis. Musca autumnalis (face fly) appears to be the most important vector for T. gulosa.

Thelazia callipaeda is widespread across Asia and has now become established in continental Europe. T. californiensis has been reported from the western United States, although characterization of its range is incomplete. T. gulosa has a wide distribution across Asia, Europe, North America, and Australia.

Adults in the eye cause varying degrees of inflammation and lacrimmation accompanied by a foreign body sensation. . In heavier infections, photophobia, epiphora, edema, corneal ulceration, and conjunctivitis may occur. 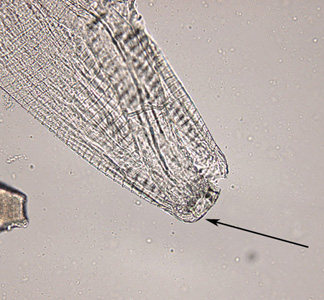 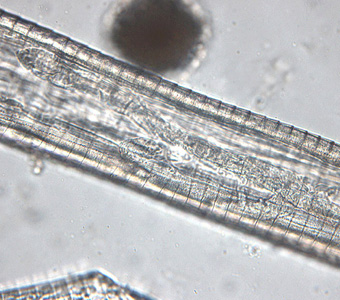 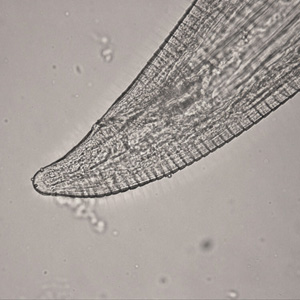 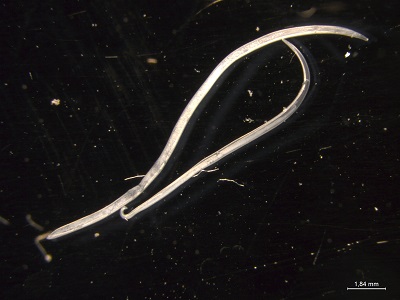 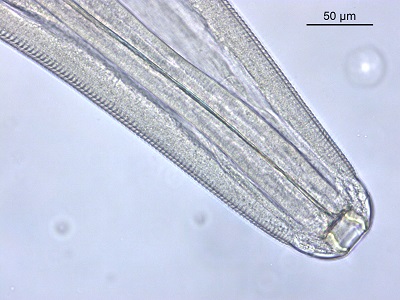 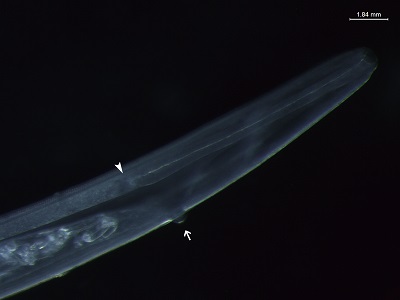 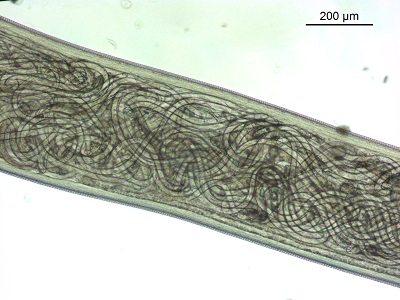 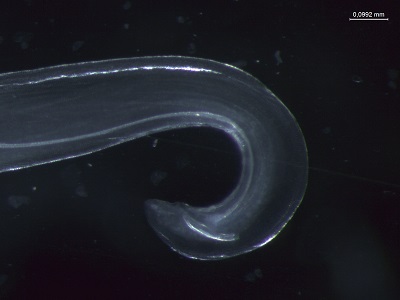 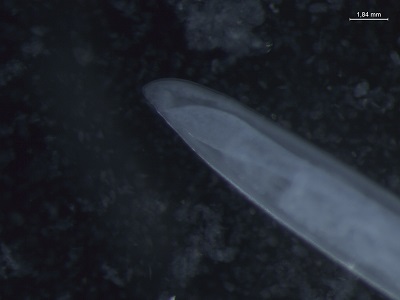 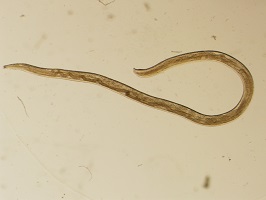 Figure A: Adult female Thelazia gulosa removed from the surface of the eye of a human, showing intestine and egg-filled ovaries taking up the majority of the length of the body. 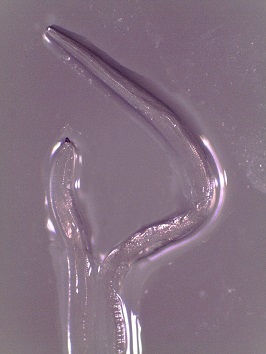 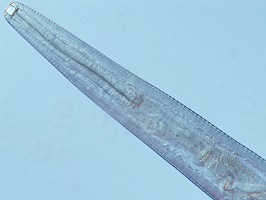 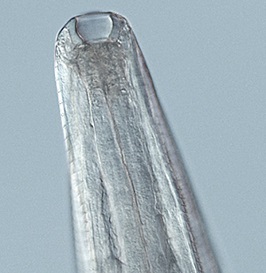 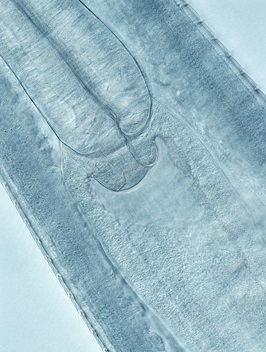 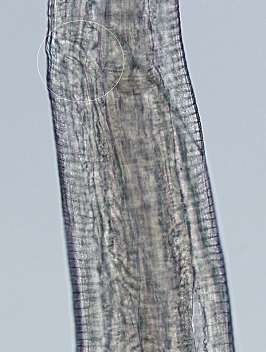 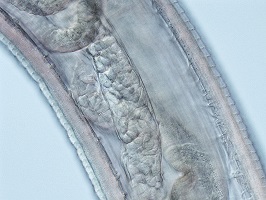 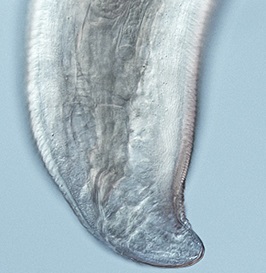 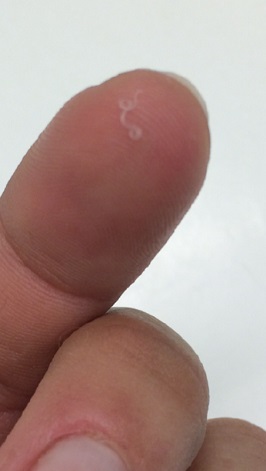 Figure I: Adult Thelazia gulosa removed from the eye of a human, resting on a person’s finger.
Larvae of Thelazia spp 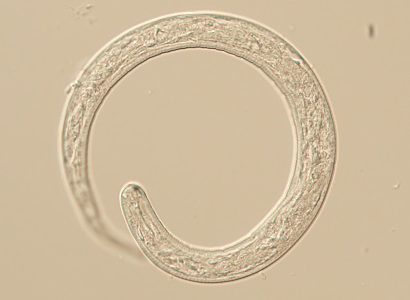 Figure A: L1 larva of Thelazia sp., likely T. callipaeda based on the patient’s travel history. L1 larvae measure up to 400 µm long and 13.5 µm wide. While not visible on this specimen, larvae are normally passed encased in a shell membrane. 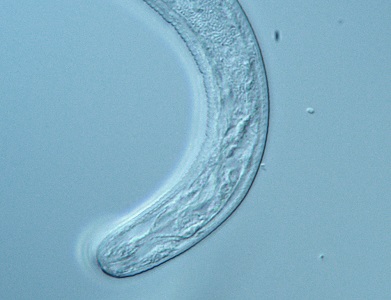 Figure B: Anterior end of the larva in Figure B. Note the lack of buccal cavity, and the developing cuticular striations.
Intermediate hosts of Thelazia spp. 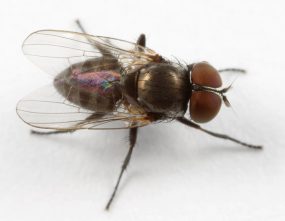 Figure A: Fannia canicularis, the lesser house fly. This species, as well as Fannia benjamini, is considered the primary vector of T. californiensis in the United States. Image courtesy of Joyce Gross. 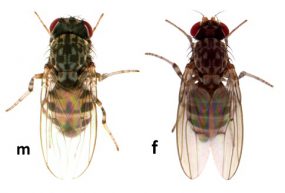 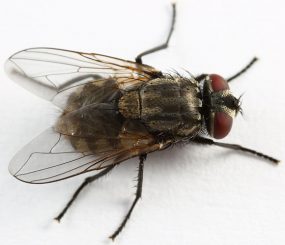 Figure C: Female Musca autumnalis, the autumn house fly. This species is the primary vector of T. gulosa in the United States and in Europe. Image courtesy of Joyce Gross.

Diagnosis depends on the identification of adult worms in the conjunctival sac coupled with morphological examination for species identification. Molecular methods may be employed on adults or larvae for additional confirmation of species and genotypes.