Pthirus pubis, the pubic or crab louse, is an insect of the order Psocodea and is an ectoparasite whose only host are humans.

. Females will lay approximately 30 eggs during their 3-4 week life span. Eggs hatch after about a week and become nymphs, which look like smaller versions of the adults. The nymphs undergo three molts (

. Adults are 1.5-2.0 mm long and flattened. They are much broader in comparison to head and body lice. Adults are found only on the human host and require human blood to survive. If adults are forced off the host, they will die within 24-48 hours without a blood feeding. Pubic lice are transmitted from person to person most-commonly via sexual contact, although fomites (bedding, clothing) may play a minor role in their transmission.

Pthiriais is common and is distributed worldwide.

The majority of infestations are asymptomatic. When symptoms are noted they may include a tickling feeling of something moving in the hair, itching, caused by the an allergic reaction to louse saliva, and irritability. Pruritis caused by the bites of pubic lice may be very intense, and discoloration of the skin may occur if the infestation is left untreated for an extended length of time.

The main mode of transmission is person to person by sexual contact with someone who is already infested. Fomites (bedding, clothing) may play a minor role, although rare.

Adult pubic lice (Pthirus pubis) measure 1.5-2.0 mm long and are dorsoventrally-flattened.  Adults are much broader in comparison to head and body lice.  The second and third legs have a large modified claw with a thumb-like projection, used for grasping on to hair shafts.  Nymphs resemble the adults but are smaller; there are three nymphal stages in the life cycle of P. pubis.  Adults and nymphs require human blood and are found only on the human host; although they are most-commonly found in the pubic and perianal regions, they may also be found on armpit, mustache, and chest hairs. 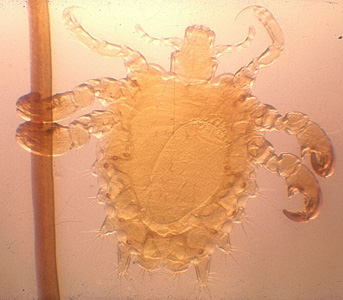 Figure A: Adult female P. pubis. An egg can be seen within her body cavity. 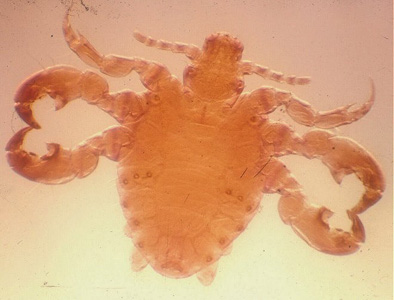 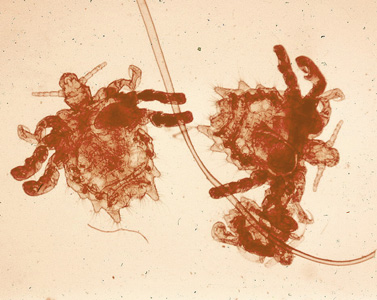 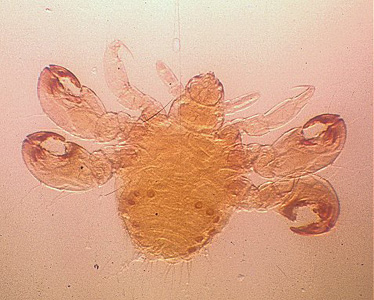 Eggs (nits) of pubic lice (Pthirus pubis) are under 1 mm in length, dark brown in color and opalescent. Eggs are glued to a hair shaft. Eggs take about one week to hatch. 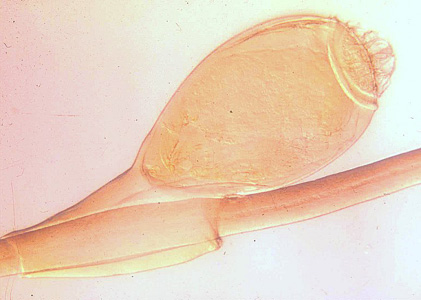 The diagnosis of pthiriasis is best made by finding a live nymph, adult louse, or a nit on the hair of a person, usually in the pubic or perianal area, although they may also be found on armpit, moustache and chest hairs.

Treatment information can be found at: https://www.cdc.gov/parasites/lice/pubic/health_professionals/index.html