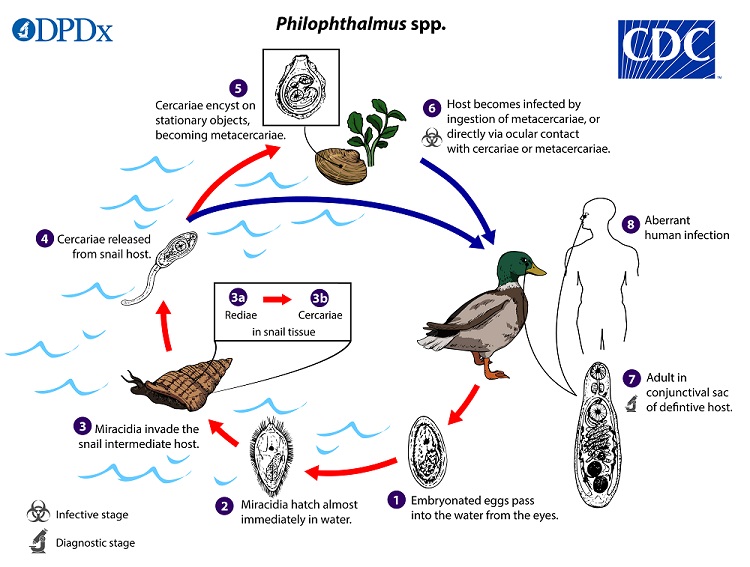 View Larger
Adult flukes in the avian definitive host’s ocular orbit release embryonated eggs, which are then introduced into water sources by the host (e.g. during diving, aquatic foraging, or drinking)

and penetrate the snail intermediate host

. Inside the snail host, pre-formed sporocysts within the miracidia produce generations of rediae, which become cercariae (

and encyst on stationary objects in water (e.g. vegetation, shells of mollusks and crustaceans) and become flask-shaped metacercariae; no second intermediate host is involved, as in many other trematodes

. When ingested, metacercariae excyst almost instantly in the mouth and migrate through the nasal passages to the ocular orbit over few days. Adult flukes are found in the conjunctival sac, either around the lachrymal glands or under/on the surface of the nictitating membrane

. Human infections are extremely rare, and the route of infection is not entirely clear. Direct entry of cercariae or metacercariae into the orbit following exposure during bathing or swimming in fresh water seems likely based on some case histories, although oral inoculation cannot be ruled out

The majority of Philophthalmus species are associated with waterbirds and wading birds (e.g., gulls, ducks, geese, herons) although other avian species are capable of being infected under experimental conditions. Aberrant infections have also been achieved experimentally or observed naturally among some mammals, such as rabbits, rats, and non-human primates. All species that have been identified in human infections (P. lacrymosus, P. gralli, P. palpebrarum) use avian hosts.

Snail intermediate hosts are diverse and include freshwater and marine species. Introduced, invasive snail species may be responsible for the spread of Philophthalmus spp. to new locations. For many species, the snail host range is not known. Melanoides tuberculata appears to be the primary intermediate host for P. gralli.

The clinical course of philophthalmiasis in humans has not been well described due to its rarity. The presence of adult flukes in the orbit causes conjunctivitis, keratitis, watery discharge, and mild edema.

Philophthalmus spp. are small, somewhat elongate trematodes, usually measuring from 2–5 mm in length and 1.5 mm in maximum width (varying by species). Major features are large, muscular oral and ventral suckers, large pharynx, and a long, prominent cirrus pouch. The tegument is generally smooth in appearance although minute spines may be present. 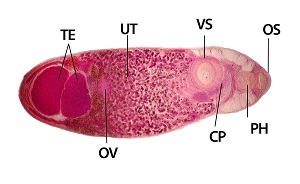 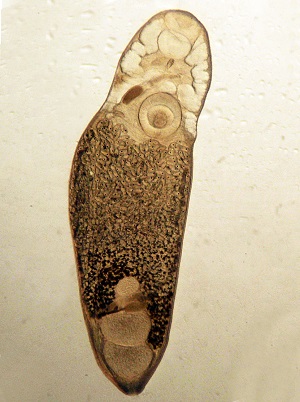 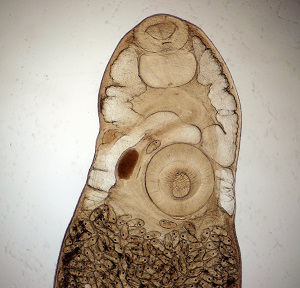 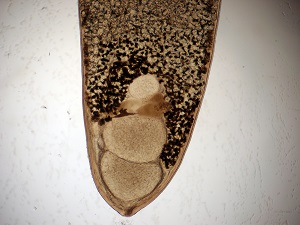 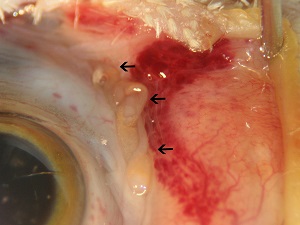 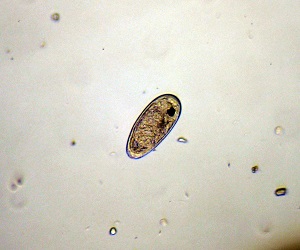 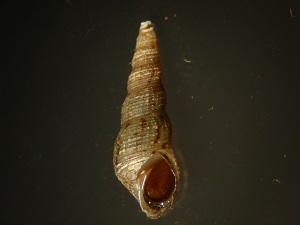 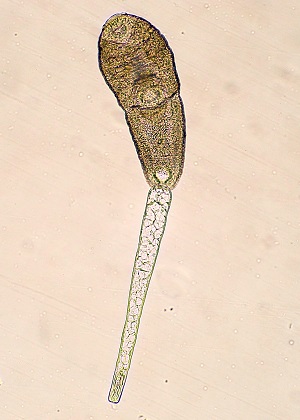 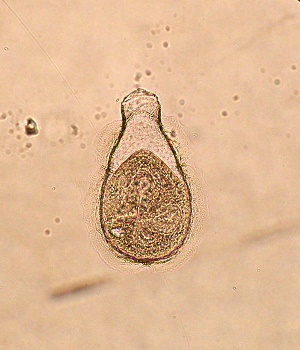 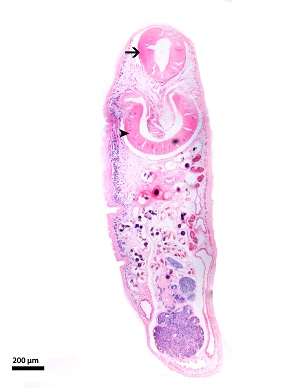 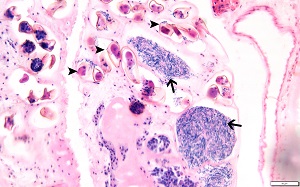 Figure B: Closer view of the longitudinal section in figure A, showing eggs (darts) within uterine loops, and spermatic tissue (arrows).

Diagnosis is based on the recovery and identification of adult flukes from the ocular orbit. Genus/species identification requires expertise in trematode morphology.

Universal laboratory precautions apply, as only adult fluke specimens are likely to be examined in a diagnostic setting.