Pediculosis is infestation with the human head-and-body louse, Pediculus humanus. There are two subspecies, the head louse (P. h. capitis) and the body louse (P. h. humanus). They are ectoparasites whose only known hosts are humans. Recent molecular data suggest that the two subspecies are ecotypes of the same species and that evolution between the two populations take place continually.

The life cycle of the head louse has three stages: egg, nymph, and adult.

Eggs: Nits are head lice eggs. They are hard to see and are often confused for dandruff or hair spray droplets. Nits are laid by the adult female and are cemented at the base of the hair shaft nearest the scalp

Nymphs: The egg hatches to release a nymph

. The nit shell then becomes a more visible dull yellow and remains attached to the hair shaft. The nymph looks like an adult head louse, but is about the size of a pinhead. Nymphs mature after three molts (

) and become adults about 7 days after hatching.

Adults: The adult louse is about the size of a sesame seed, has 6 legs (each with claws), and is tan to grayish-white

. In persons with dark hair, the adult louse will appear darker. Females are usually larger than males and can lay up to 8 nits per day. Adult lice can live up to 30 days on a person’s head. To live, adult lice need to feed on blood several times daily. Without blood meals, the louse will die within 1 to 2 days off the host.

Body lice: Body lice are morphologically similar to head lice. They have a different life cycle, whereas body lice reside on and lay their eggs on the clothing and fomites of infected individuals and migrate to the human body to feed.

Head lice infestation is very common and is distributed worldwide. Preschool and elementary-age children, 3 to 11 years of age are infested most often. Females are infested more often than males, probably due to more frequent head to head contact. Body lice are also cosmopolitan but are less common and usually seen in settings of poverty, war, and homelessness.

The majority of head lice infestations are asymptomatic. When symptoms are noted they may include a tickling feeling of something moving in the hair, itching, caused by an allergic reaction to louse saliva, and irritability. Secondary bacterial infection may be a complication. Body lice can serve as vectors for Rickettsia prowazekii (epidemic typhus), Bartonella quintana (trench fever), and Borrelia recurrentis (louse-borne relapsing fever).

The main mode of transmission of head lice is contact with a person who is already infested (i.e., head-to-head contact). Contact is common during play (sports activities, playgrounds, at camp, and slumber parties) at school and at home.

Less commonly, transmission via fomites may occur with regards to head lice (more common with body lice). Wearing clothing, such as hats, scarves, coats, sports uniforms, or hair ribbons worn by an infested person; using infested combs, brushes or towels; or lying on a bed, couch, pillow, carpet, or stuffed animal that has recently been in contact with an infested person may result in transmission. Of note, both nymph and adult lice forms need to feed on blood to live. If an adult louse does not have a blood meal, it can die in 2 days.

Body and head lice (Pediculus humanus humanus and P. h. capitis, respectively) cause a condition in humans known as Pediculosis. Although body lice are usually found on the torso, and head lice are found on the head and face,  both species may change location. Adult females are approximately 3-4 mm long; males are slightly smaller. Pediculus can be distinguished from the pubic lice (Pthirus pubis) by a larger length:width ratio of the body. The legs are adapted for clinging to the host’s hair. Eggs (nits) are laid on hair shafts and are held tightly by a cementlike substance, making them difficult to remove. 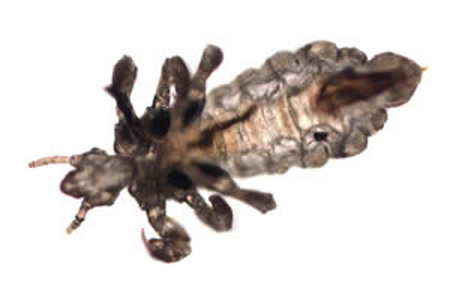 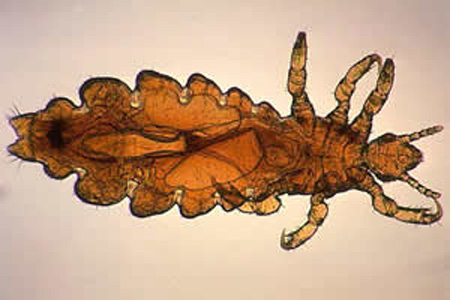 Figure B: Adult female of P. humanus capitis. In this specimen, eggs can be observed in the abdomen. 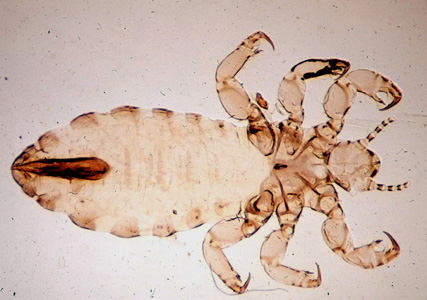 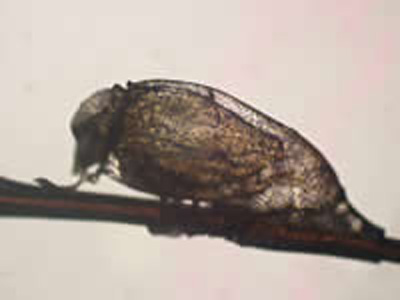 Figure A: Egg ('nit') of P. humanus capitis, with a first-instar nymph starting to hatch out. 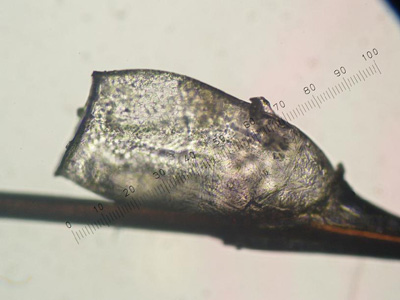 Figure B: Empty shell of the nit in Figure A, the nymph having left.

The diagnosis of pediculosis is best made by finding a live nymph or adult louse on the scalp or in the hair of a person. Finding numerous nits within 6 mm of the scalp is highly suggestive of active infestation. Finding nits only more than 6 mm from the scalp is only indicative of previous infestation.

Treatment information for pediculosis can be found at: https://www.cdc.gov/parasites/lice/index.html