During a blood meal, an infected blackfly (genus Simulium) introduces third-stage filarial larvae onto the skin of the human host, where they penetrate into the bite wound

.   In subcutaneous tissues the larvae

develop into adult filariae, which commonly reside in nodules in subcutaneous connective tissues

. Adults can live in the nodules for approximately 15 years. Some nodules may contain numerous male and female worms. Females measure 33 to 50 cm in length and 270 to 400 µm in diameter, while males measure 19 to 42 mm by 130 to 210 µm. In the subcutaneous nodules, the female worms are capable of producing microfilariae for approximately 9 years. The microfilariae, measuring 220 to 360 µm by 5 to 9 µm and unsheathed, have a life span that may reach 2 years.  They are occasionally found in peripheral blood, urine, and sputum but are typically found in the skin and in the lymphatics of connective tissues

. A blackfly ingests the microfilariae during a blood meal

.   After ingestion, the microfilariae migrate from the blackfly’s midgut through the hemocoel to the thoracic muscles

. The third-stage infective larvae migrate to the blackfly’s proboscis

The agent of river blindness, Onchocerca volvulus, occurs mainly in Africa, with additional foci in Latin America and the Middle East.

Onchocerciasis can cause pruritus, dermatitis, onchocercomata (subcutaneous nodules), and lymphadenopathies. The most serious manifestation consists of ocular lesions that can progress to blindness.

Microfilariae of Onchocerca volvulus in tissue.

Microfilariae of Onchocerca volvulus are unsheathed and measure 300-315 µm in length. The tail tapers to a point and is often sharply bent. The nuclei do not extend to the tip of the tail. Microfilariae typically reside in skin but may be found in blood or urine during heavy infections, or invade the eye and cause a condition known as river blindness. 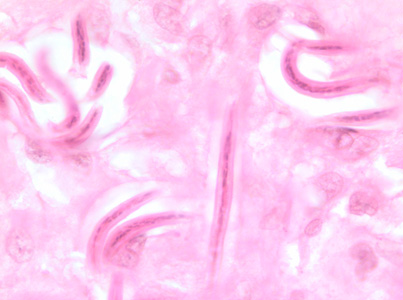 Figure A: Microfilariae of O. volvulus from a skin nodule of a patient from Zambia, stained with hematoxylin and eosin (H&E). Image taken at 1000x oil magnification. 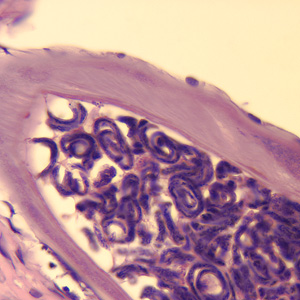 Figure E: Cross-section of an adult female O. volvulus, stained with H&E. Note the presence of many microfilariae within the uterus. 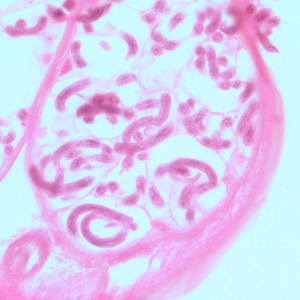 Figure B: Microfilariae of O. volvulus within the uterus of an adult female. The specimen was taken from the same patient as in Figure A. Image taken at 500x magnification, oil. 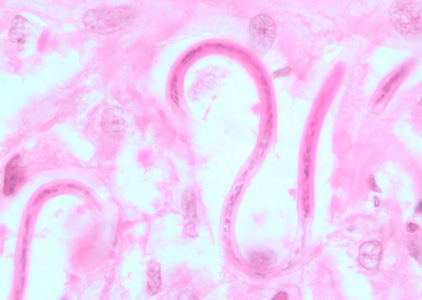 Figure C: Microfilariae of O. volvulus from a skin nodule of a patient from Zambia, stained with H&E. Image taken at 1000x oil magnification. 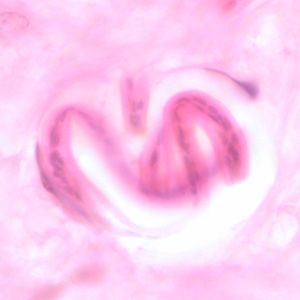 Figure D: Coiled microfilaria of O. volvulus, in a skin nodule from a patient from Zambia, stained with H&E. Image taken at 1000x oil magnification.

Adults of O. volvulus in tissue. 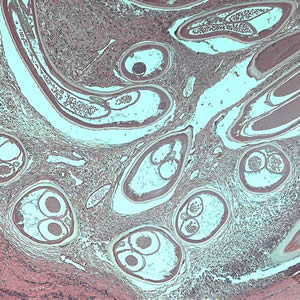 Figure A: Adult of O. volvulus in a subcutaneous nodule, stained with hematoxylin and eosin (H&E). 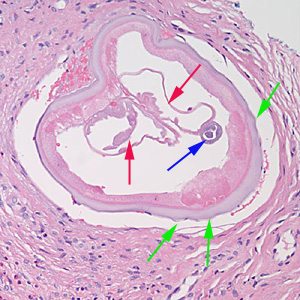 Figure E: Cross-section of an adult female Onchocerca sp. from the biopsy of a scalp nodule from a patient from Liberia. Note the presence of the intestine (blue arrow), uterine tubes (red arrows) and some cuticular nodules (green arrows). Also notice the weak musculature under the thick cuticle. Image courtesy of Drs. Philip LeBoit and Paul Borbeau. 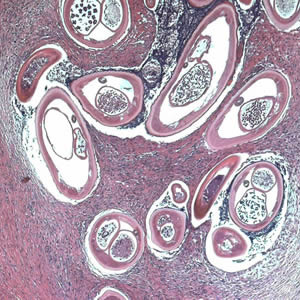 Figure B: Adult of O. volvulus in a subcutaneous nodule, stained with hematoxylin and eosin (H&E). 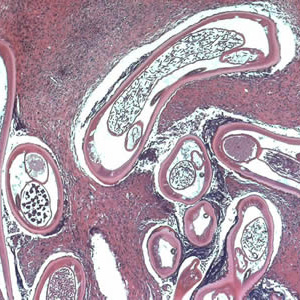 Figure C: Adult of O. volvulus in a subcutaneous nodule, stained with H&E. 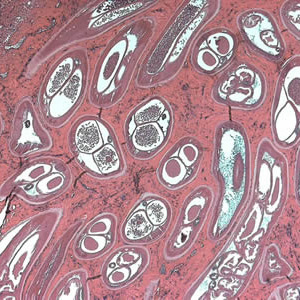 Figure D: Adult of O. volvulus in a subcutaneous nodule, stained with H&E.

Onchocerciasis is usually diagnosed by the finding of microfilariae in skin snips or adults in biopsy specimens of skin nodules. Microfilariae of Onchocerca do not exhibit any form of periodicity and skin snips may be collected at any time.

Skin snips should be thin enough to include the outer part of the dermal palpillae but not so thick as to produce bleeding. Skin snips should be placed immediately in normal saline or distilled water, just enough to cover the specimen. Microfilariae tend to emerge more rapidly in saline, however in either medium the microfilariae typically emerge in 30-60 min and can be seen in wet mount preparations. For a definitive diagnosis, allow the wet mount to dry, fix in methanol, and stain with Giemsa or hematoxylin-and-eosin.

Treatment information for onchocerciasis can be found at: https://www.cdc.gov/parasites/onchocerciasis/health_professionals/index.html