Common livestock such as sheep, goats, and swine, as well as non-human primates, are the usual definitive hosts for Oesophagostomum spp., but other animals, including humans and cattle, may also serve as definitive hosts. Eggs are shed in the feces of the definitive host

, and may be indistinguishable from the eggs of Necator and Ancylostoma. Eggs hatch into rhabditiform (L1) larvae in the environment

, given appropriate temperature and level of humidity. In the environment, the larvae will undergo two molts and become infective filariform (L3) larvae

. Worms can go from eggs to L3 larvae in a matter of a few days, given appropriate environmental conditions. Definitive hosts become infected after ingesting infective L3 larvae

. After ingestion, L3 larvae burrow into the submucosa of the large or small intestine and induce cysts. Within these cysts, the larvae molt and become L4 larvae. These L4 larvae migrate back to the lumen of the large intestine, where they molt into adults

, . Eggs appear in the feces of the definitive host about a month after ingestion of infective L3 larvae.

Oesophagostomum spp. are widely distributed wherever livestock is raised, but more common in the tropics and subtropics. The highest incidence in humans is in the northern regions of Togo and Ghana, where O. bifurcum (primarily a monkey parasite) appears to cycle naturally in the human populations. Sporadic cases in humans have also been recorded in Brazil, Malaysia, Indonesia, French Guiana, and West Africa

Acute abdomen is the most-common manifestation in humans, mimicking an appendicitis. A low-grade fever and tenderness in the lower-right quadrant are the most-common symptoms; vomiting, anorexia, and diarrhea are less-common. Intestinal obstruction may also occur, mimicking a hernia. Patients may also present with large, painless cutaneous masses in the lower abdominal region. In rare instances, Oesophagostomum spp. will perforate the bowel wall, causing purulent peritonitis or migrate to the skin, producing cutaneous nodules.

Oesophagostomum spp. are primarily parasites of livestock and non-human primates, and humans tend to be only incidental hosts for parasites in this genus. Eggs of O. bifurcum, the most-common species infecting humans, cannot be differentiated morphologically from the eggs of Necator or Ancylostoma (eggs of other animal oesophagostome species tend to be larger than typical hookworm eggs, however). The eggs of O. bifurcum measure 60-75 µm long by 35-40 µm wide. Eggs are often in a later stage of cleavage than hookworm species when shed in feces. 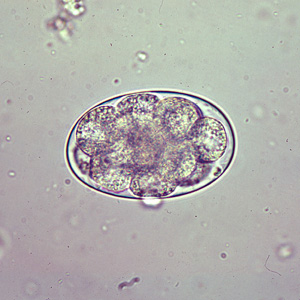 Figure A: Egg of Oesophagostomum sp. in an unstained wet mount of stool. 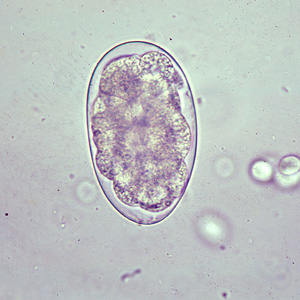 Figure B: Egg of Oesophagostomum sp. in an unstained wet mount of stool.

The definitive hosts of Oesophagostomum spp. become infected from the ingestion of infective L3 larvae, which develop in the environment. L3 larvae are longer than the L3 larvae of hookworms, measuring 710-950 µm in length. The intestine is made-up of alternating triangular-shaped cells (zigzag gut cells). The tail end has a long, thin, tapered sheath, with a considerable gap between the end of the tail and the end of the sheath. 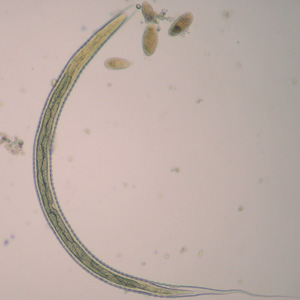 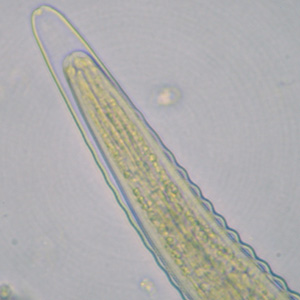 Figure B: Higher-magnification of the anterior end of the specimen in Figure A. Note the long cephalic space. 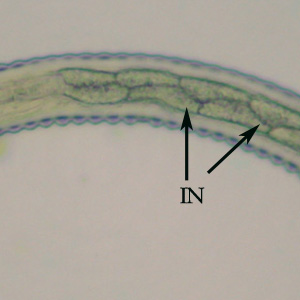 Figure C: Mid-section of the specimen in Figures A and B. Notice the alternating triangular-shaped intestinal cells (IN). 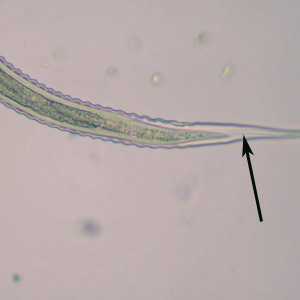 Adults of Oesophagostomum spp. are bursate nematodes, related to and morphologically-similar to, the hookworms. Females measure 1.5-3.0 cm in length; males are smaller. In both sexes, the anterior end has a cephalic inflation or vesicle, a transverse cephalic groove, and an oral opening guarded by external and internal leaf crowns (corona radiata). The cuticle is ringed with transverse striations. The posterior end of the female is short and pointed; the male possesses a symmetrical bursa and paired, equal spicules. Adults reside in the large intestine of the definitive host. 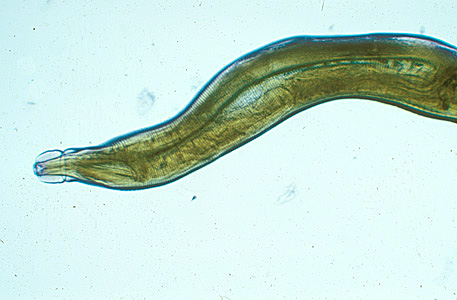 Figure A: Adult of Oesophagostomum sp. 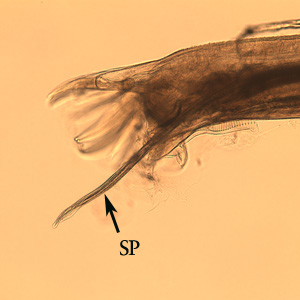 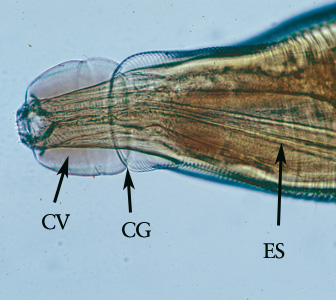 Figure B: Higher magnification of the anterior end of the specimen in Figure A. Note the presence of the cephalic vesicle (CV), cephalic groove (CG) and esophagus (ES). 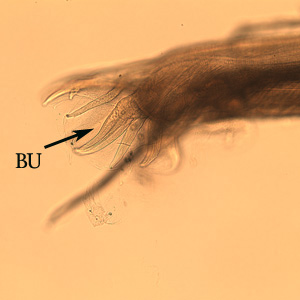 Figure F: Same specimen as in Figure E, but shown in a slightly different focal plane. Note the bursa (BU). 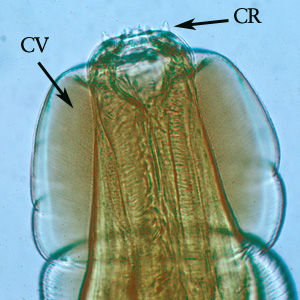 Figure C: Higher magnification of the anterior end of the specimen in Figures A and B. Note the presence of the cephalic vesicle (CV) and corona radiata (CR). 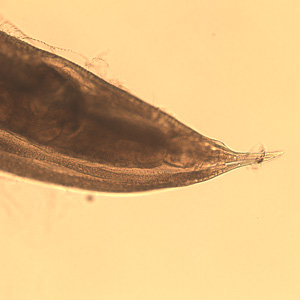 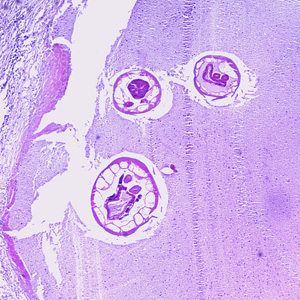 Figure A: Cross-section of an adult of Oesophagostomum sp. in a colon biopsy specimen from a patient from Africa, stained with H&E. Image taken at 40x magnification. 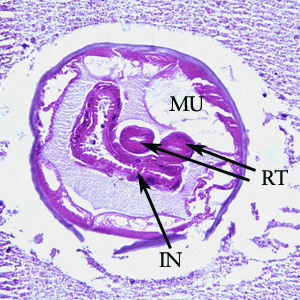 Figure B: Higher magnification (200x) of the specimen in Figure A. Note the large, platymyarian muscle cells (MU), intestine with brush border (IN), and paired reproductive tubes (RT). 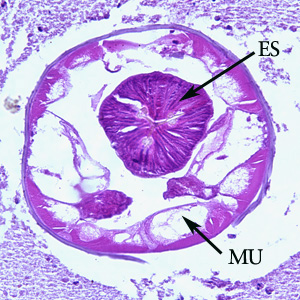 Diagnosis is difficult during routine ova and parasite (O&P) examinations of stool, due to the similarity of Oesophagostomum eggs to the eggs of Necator and Ancylostoma. Eggs tend to be shed in greater numbers during cases of oesophagostomiasis than hookworm infection, however. Finding an intact worm during surgery or in a biopsy specimen can provide a definitive diagnosis.