A male patient originally from Afghanistan, who had moved to the United States a few months ago, required medical attention for a lesion on his hand. It first appeared about one year prior but had recently grown considerably. The patient is otherwise asymptomatic, and the lesion has no pruritus, pain, or discharge. A biopsy of the lesion was obtained, and the pathology laboratory reported lymphohistiocytic infiltrates. A portion of the unpreserved biopsy was sent in a universal transport medium to the CDC for further testing. A touch prep was made and stained with Giemsa. Figures A and B show what was observed at 1000x oil immersion magnification. The objects of interest measure 2.5 – 3.5 micrometers on average.

What is your diagnosis?  Based on what criteria?  What, if any, other tests would be necessary for this case? 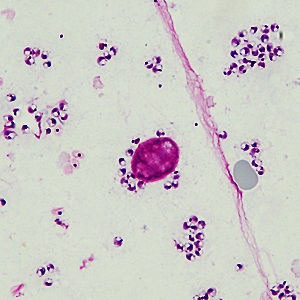 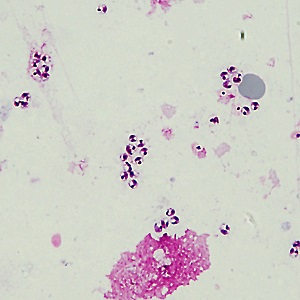 This was a case of cutaneous leishmaniasis caused by Leishmania sp. Only a genus-level diagnosis can be accomplished by microscopy; a species-level identification requires subsequent testing by molecular analysis (or isoenzyme analysis following culture propagation). Molecular testing for this case revealed that the causative agent was Leishmania tropica.  Diagnostic morphologic features shown in the Figures included: