A 39-year-old journalist with extensive travel throughout the Middle East and Sub-Saharan Africa sought medical attention for dysuria and occasional hematuria that had been progressing for several months. A urine specimen was collected for urinalysis which revealed few erythrocytes and epithelial cells. A cystoscopy was also performed and cysts were observed in the bladder of which some were biopsied, and the specimens were sent to pathology for evaluation. Figures A–C show what was observed on hematoxylin and eosin (H & E) stained sections. Objects of interest observed measured 120 micrometers in length by 42 micrometers in width on average; Figures A and B were captured at 100x magnification; Figure C is a composite highlighting two objects of interest at 100x on the right and 400x on the left. What is your diagnosis? Based on what criteria? 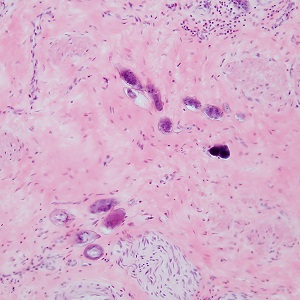 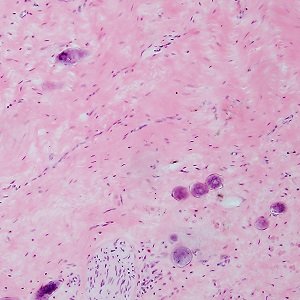 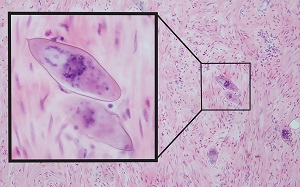 This was a case of urogenital schistosomiasis caused by Schistosoma haematobium.  Morphologic features shown in the case were: