A 45-year-old man from Paraguay went on a safari in eastern Zambia. He reported multiple insect bites at one location and noticed that some bites had developed into sores while still in country. One week after returning, he developed fever, headache, and enlarged lymph nodes and sought medical attention. A rapid test for malaria was negative but a blood smear was still ordered and stained with Wright-Giemsa. Figures A– D show what was observed on the blood smear at 1000x oil. What is your diagnosis? Based on what criteria? 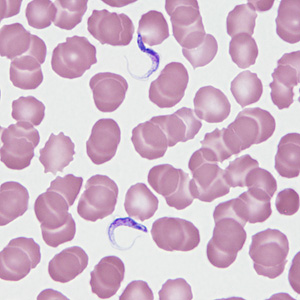 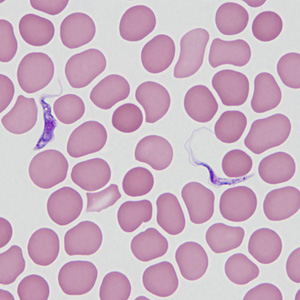 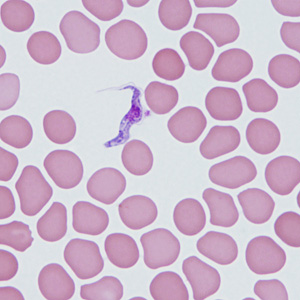 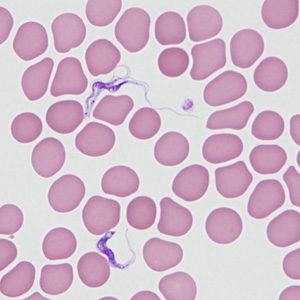 This was a case of African trypanosomiasis (African Sleeping Sickness) caused by the protozoan hemoflagellate belonging to the complex Trypanosoma brucei. Morphologic features shown in the figures included:

Human African trypanosomiasis is a vectorborne disease spread by tse tse flies (Glossina spp.) and caused by two Trypanosoma brucei subspecies, T. b. gambiense and T. b. rhodesiense. These subspecies are indistinguishable morphologically. This case was most likely caused by T. b. rhodesiense (East African Sleeping Sickness) based on geographic location where the infection was likely contracted and relative parasite load shown on the blood smear. Infections with T. b. gambiense are often more difficult to diagnose from blood smears and may require serial examinations of lymph node aspirate and/or concentration techniques performed on CSF.