A 55 year old man from Tasmania, Australia presented with progressive general muscle weakness and myositis with 27 lb weight loss and loss of muscle mass for over two years. The patient was a keen hunter and liked to cook and eat the game he killed. He had little travel history, having previously lived in North Queensland, but no other part of Australia. A previous muscle biopsy found only chronic myopathy with inflammatory infiltrates and fibrosis. He had an elevated eosinophil count and was treated with prednisone for assumed autoimmune myositis. His condition deteriorated to the point where he was admitted to intensive care. In hospital, his serum creatine kinase (CK) was 2130 U/L, alanine aminotransferase (ALT) was 51 U/L, C-reactive protein (CRP) was 39 mg/L and erythrocyte sedimentation rate (ESR) was 45 mm/hr. The patient’s eosinophil count was 1.3 × 109/L. A second muscle biopsy was taken, and a squash prep revealed a nematode (length ~350 µm), and several were seen in cross-section of a histological section of skeletal muscle, in which the diameter could be measured (20-25 µm). 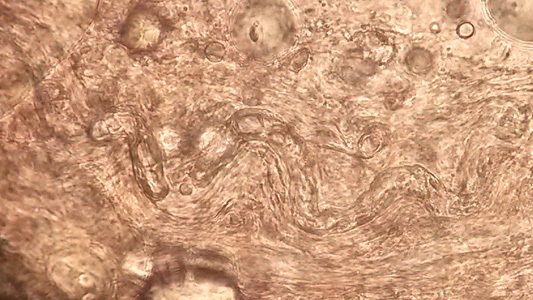 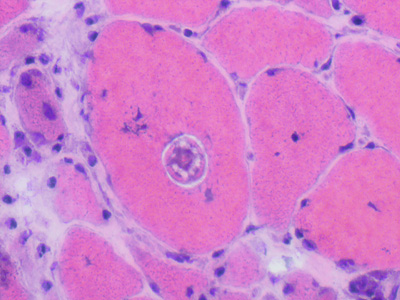 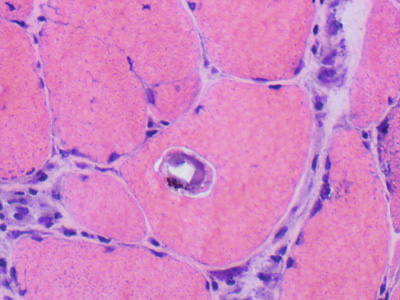 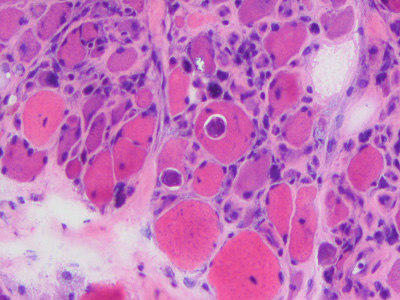 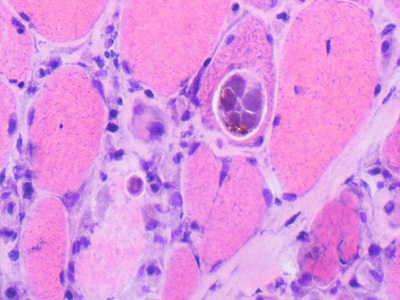 This was a case of haycocknematosis caused by the tissue nematode Haycocknema perplexum. Distinguishing features were:

Only eleven cases of H. perplexum infection have been reported in the literature. All cases have been in patients from either Tasmania or North Queensland. Although the reservoir host(s) and life cycle remain unknown, several patients had a history of eating undercooked wallaby meat. In these reported cases, the disease was slowly progressive over years and eventually became severe, requiring hospitalization.  Two deaths have occurred. The potential full spectrum of clinical manifestations of this parasite remains unknown.