A 31-year-old female, with travel to Mexico a few months prior, noticed a small worm-like object on the inner surface of her lower lip.  She removed the object with a needle and delivered it to her health care provider.  The object was forwarded to the CDC DPDx Team for identification.  Figures A and B were taken with a dissecting microscope and the ruler in the background shows one centimeter; Figure C is a composite of two images of the organism that was submitted taken with a compound microscope to show the entire organism at 40x magnification. The insert (of the anterior end) was taken at 100x magnification.  What is your diagnosis?  Based on what criteria? 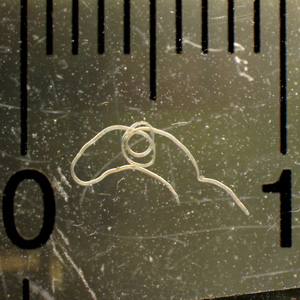 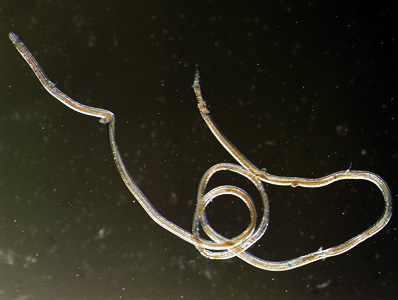 The worm was identified as Gongylonema spp., a spiruroid nematode rarely reported in humans. Gongylonema pulchrum (the primary species known to infect humans) has a broad definitive host range in nature, including dogs, cats, ruminants, skunks, and birds and distribution is cosmopolitan. This parasite uses various insects such as beetles and cockroaches as intermediate hosts, and in humans, the accidental ingestion of an infected insect can result in infection. In humans, this parasite usually manifests in the oral cavity and removal is curative. A diagnosis can be made by examination of the worm or finding its eggs in a fecal specimen. Morphologic diagnostic features included the characteristic bosses on the anterior portion of the worm (Figure C).