A 50-year-old male originally from Southeast Asia was undergoing chemotherapy for squamous cell carcinoma of the lung. He was admitted one week prior with nausea, vomiting, and confusion. Pulmonary infiltrates were observed on a chest radiograph and bronchial alveolar lavage (BAL) specimens were collected for routine microbiological work-up. The following images show what was observed by the attending pathologist. Figures A and B were stained with Giemsa; Figures C and D with Papanicolaou. The objects of interest measured 500-600 micrometers in length. What is your diagnosis? Based on what criteria? 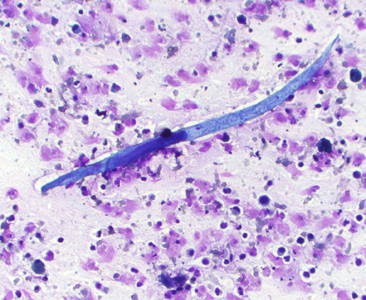 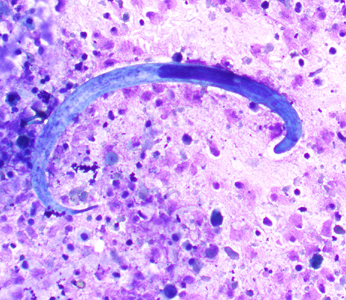 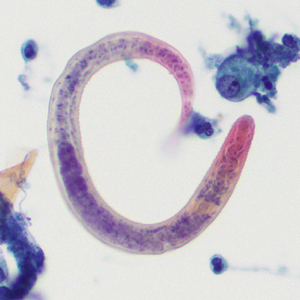 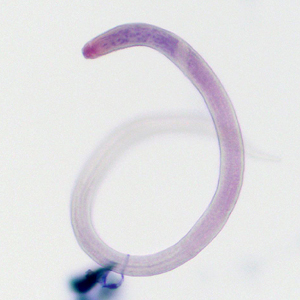 This was a case of disseminated strongyloidiasis caused by Strongyloides stercoralis. The images showed the infectious third instar (L3) larvae. In addition to the size, the most telling morphologic feature shown in these images was the nearly 1:1 ratio of intestine to esophagus (arrows, Figures B and C indicate the juncture between the esophagus and intestine). Another important feature is the notched tail (arrow, Figure E), which can be difficult to see unless the slide is examined at 1000x magnification with oil. 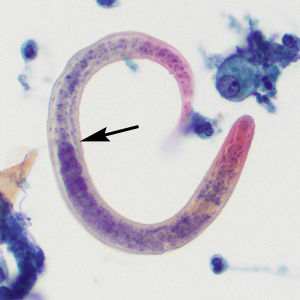 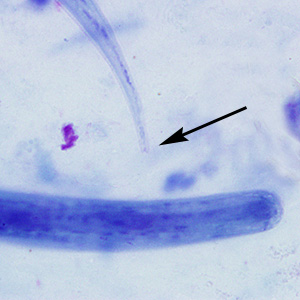