A 17-year-old female presented with a crusted nodule on her left cheek two months after traveling to Israel.  She admitted to camping outdoors and being bitten by insects on her face during the trip.  No other symptoms were noted.  A biopsy was obtained from the periphery of the nodule, placed in a sterile vial with transport media, and sent to the CDC for diagnostic work-up.  Upon receipt, a touch-prep smear was prepared, fixed with methanol, stained with Giemsa, and examined.  Figures A–C show was observed at 1000x magnification with oil.  What is your diagnosis?  Based on what criteria?  What other testing, if any, would you recommend? 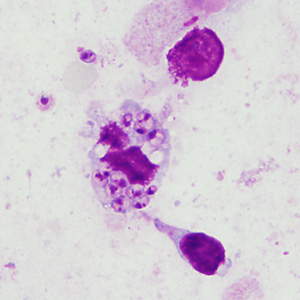 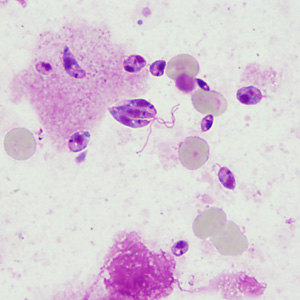 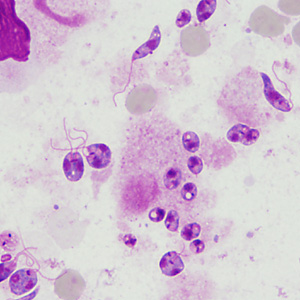 This was a case of cutaneous leishmaniasis caused by Leishmania major. The genus-level diagnosis was based on the observation of amastigotes and promastigotes on the Giemsa-stained touch-prep smear. The species-level identification was based on subsequent molecular analysis, as Leishmania spp. cannot be differentiated by the morphology of the amastigotes.

Amastigotes (blue arrows Figure C) are characterized as being small spherical to ovoid structures approximately 1-5 micrometers in length by 1-2 micrometers wide. In addition, both a nucleus and a kinetoplast should be visualized before reporting as positive. When there is a delay in shipping and/or processing, amastigotes may transform into promastigotes (black arrows Figure C) if the ambient temperature is similar to that found in the gut of the sand fly vector (Phlebotomus spp. and Lutzomyia spp.). Promastigotes are larger, elongated or spindle-shaped and have a flagellum projecting from the anterior end. Promastigote formation is never seen in Trypanosoma cruzi, the causative agent of Chagas disease and the only other organism that produces amastigotes in human tissue. 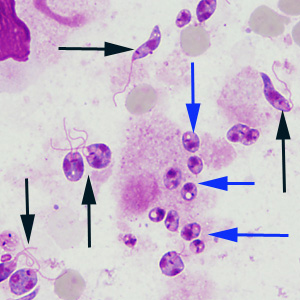