A 10-year-old girl residing in Pennsylvania was hospitalized with a 101.5º F fever, vomiting, abdominal pain, and diarrhea. The patient had recently returned from visiting family in West Africa. A blood specimen was collected in EDTA and sent to the hematology lab for routine work-up, including preparation of thick and thin films for malaria diagnosis. Suspect organisms were seen by the attending hematologist. The slides were forwarded on to the state health lab, whose microbiologist took digital images and sent them to the DPDx Team for diagnostic assistance. Figures A-F show four of the images received for consultation. What is your diagnosis? Based on what criteria? 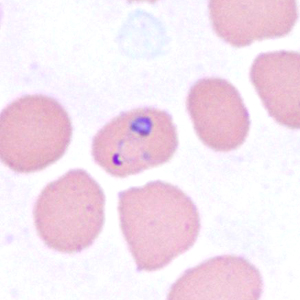 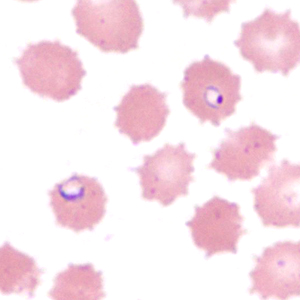 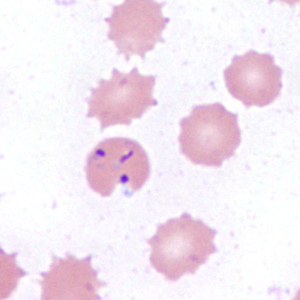 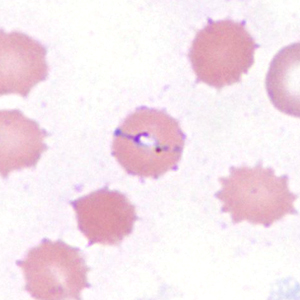 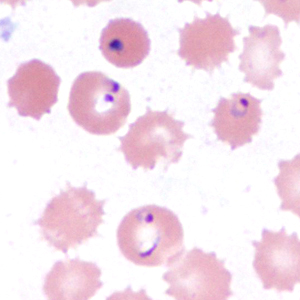 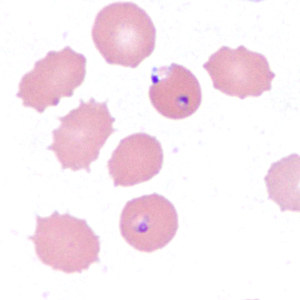 This was a case of malaria caused by Plasmodium falciparum. Diagnostic morphologic features included:

The images demonstrated many crenated RBCs, probably due to a delay in processing. Crenation of old RBCs should not be confused for fimbriated RBCs seen in cases of malaria caused by P. ovale. The presence of pigment ruled-out Babesia, which is endemic in Pennsylvania. In this case, PCR supported the morphologic diagnosis.

This case and images were kindly provided by the Pennsylvania Department of Health, Exton, PA.