A 25-year-old male was hospitalized for Crohn’s exacerbation, duodenal outlet obstruction, and regional enteritis. He indicated that he has not had recent travel abroad. The patient underwent a gastroenterostomy and duodenal biopsy specimens revealed acute and chronic inflammation with crypt abscesses, focal ulceration, and reactive epithelial changes. Granulomata, epithelial dysplasia, and fibrosis were lacking. The attending pathologist also noted suspect parasitic organisms and the slides were sent to the state health department, which in turn forwarded them to the CDC-DPDx for diagnostic assistance. Figures A–F show what was observed on the slides received for testing. Figure A was taken at 100x magnification; Figures B–D at 400x magnification; and Figures E and F at 1000x magnification with oil. What is your diagnosis? Based on what criteria? 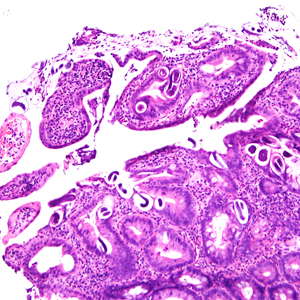 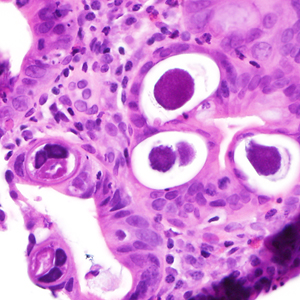 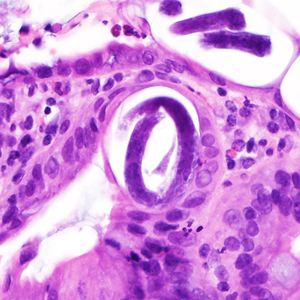 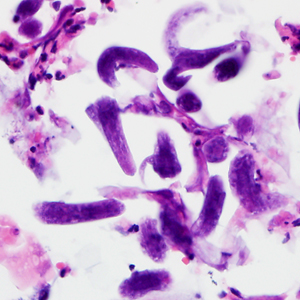 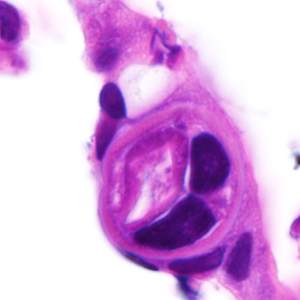 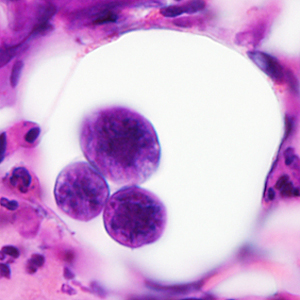 This was a case of disseminated strongyloidiasis caused by Strongyloides stercoralis. The images revealed both adult females and filariform larvae (Figures A and B). Diagnostic morphologic features included: 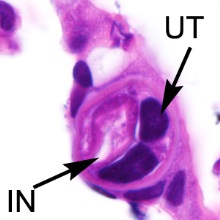 Additional testing on this patient also revealed larvae in sputum. Serology can also be performed for confirmation of strongyloidiasis.