An 18-year-old female presented a worm-like object to her primary health care provider, claiming it was found in her stool. She spent two months in Mexico five years prior, and admitted seeing similar objects in her stool over the course of the five years. The specimen was sent to the county public health laboratory for testing. Stool specimens were also collected in 10% formalin for formalin-ethyl acetate (FEA) concentration. Figure A shows the worm-like object after injecting with lactophenol cotton blue. Figure B shows what was observed in low numbers on an unstained wet mount of stool from the FEA concentration; the objects of interest measured 30-34 μm in diameter on average. What is your diagnosis? Based on what criteria? 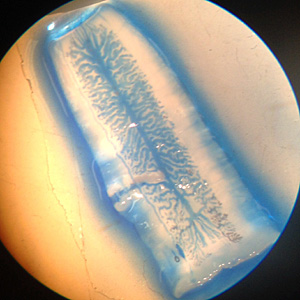 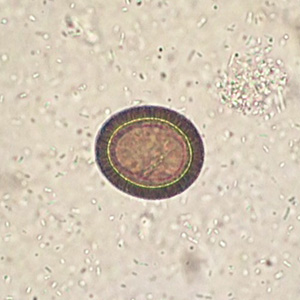 This was a case of taeniasis caused by Taenia saginata. Diagnostic morphologic features included: