A 26-year-old man was seen by his health care provider for the sensation of something moving in his mouth. He reported a history of such sensations since he was age 12. He was referred to an otolaryngologist who observed a serpentine-like lesion, with possible movement, in the lateral left soft palate. A worm-like structure was removed surgically and sent to the DPDx Team for identification. Figure A shows a gross image of the entire worm. Figures B and C show the anterior and posterior ends, respectively, and were captured at 100x magnification. Figure D shows the mid-section, captured at 200x magnification. What is your diagnosis? Based on what criteria? 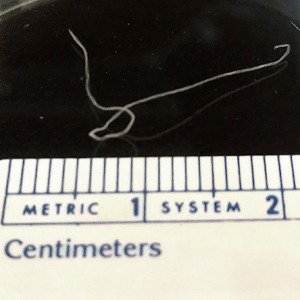 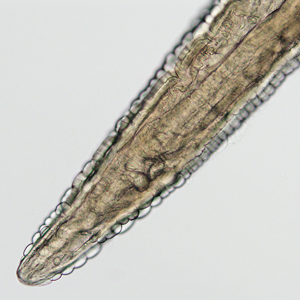 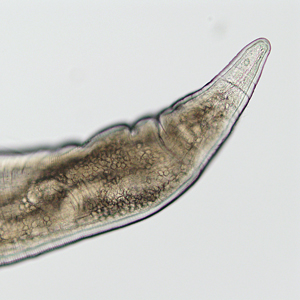 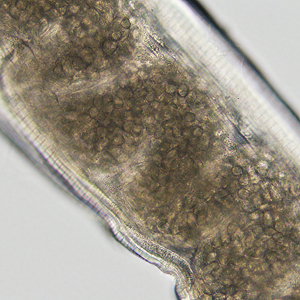 The worm was identified as a female Gongylonema sp., a spiruroid nematode rarely reported in humans. Gongylonema pulchrum (the only species known to infect humans) has a broad definitive host range in nature, including dogs, cats, ruminants, skunks, and birds. This parasite uses various insects such as beetles and cockroaches as intermediate hosts, and the accidental ingestion of an infected insect can result in infection. In humans, this parasite usually manifests in the oral cavity and removal is curative. A diagnosis can be made by examination of the worm or finding its eggs in a fecal specimen. Morphologic diagnostic features included the characteristic bosses on the anterior portion of the worm (Figure B). Figure D showed a mass of infertile eggs in utero suggesting that no male worm was present.