A 65-year-old patient was admitted to the hospital with fever, nausea, and vomiting after recently being treated as an outpatient for a urinary tract infection. Her past medical history included being diagnosed with bipolar disorder, hypertension, osteoarthritis, and compression fractures. She was a smoker and the only known animal contacts were her pet dogs. During hospitalization, her mental health continued to decline and she was pronounced brain-dead after one month’s stay at the hospital. CT and MRI scans of her brain prior to death did not show any focal lesions. An autopsy was performed and cultures of brain tissue were negative for bacterial and viral agents. Sections of brain tissue were processed by Pathology and stained with hematoxylin and eosin (H&E). Figures A–B show what was observed by the attending pathologist. Images were captured and sent to the DPDx Team for diagnostic assistance. What is your diagnosis? Based on what criteria? 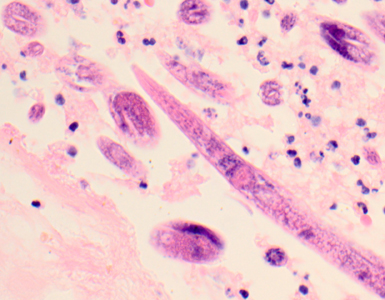 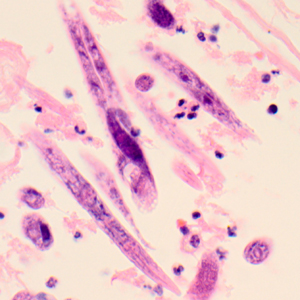 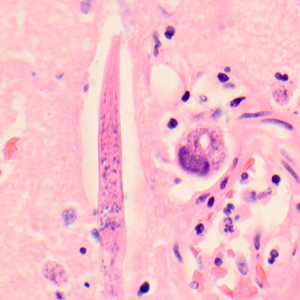 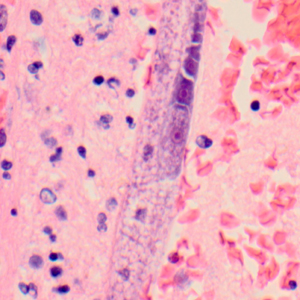 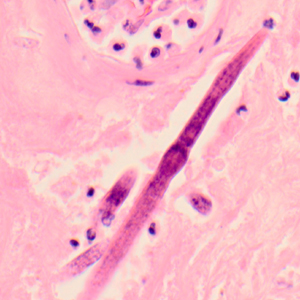 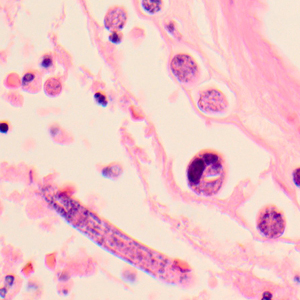 This was a case of meningoencephalitis caused by a nematode in the genus, Halicephalobus. Diagnostic features included: 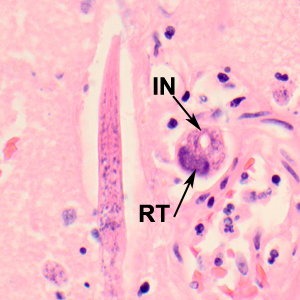 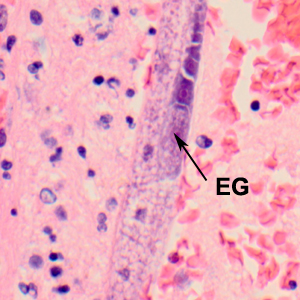 Members of the genus Halicephalobus are free-living or saprophagous nematodes that under certain conditions have been known to infect humans and livestock. It is believed the worms enter the body through pre-existing lesions and disseminate to various organs, especially the central nervous system, where they multiply rapidly causing death. Diagnosis is usually made post-mortem.

This case and images were kindly provided by the University of South Alabama Medical Center, Mobile, AL.