A 27-year-old patient underwent chemotherapy and a bone marrow transplant after being diagnosed with leukemia. Approximately two months after the bone marrow transplant, the patient was admitted to the hospital. The patient presented with severe, intractable cardiac decompensation and died while at the hospital. Autopsy specimens of the heart were sent to Pathology for routine sectioning and staining with hematoxylin and eosin (H&E). Figures A–D show what was observed by the attending pathologist on H&E-stained heart tissue. The slides and a tissue block were forwarded to the CDC’s Infectious Diseases Pathology Branch (IDPB) for further assistance. Specimens taken from the tissue block were also processed and examined by electron microscopy (Figures E and F) by IDPB and the DPDx Team. What is your diagnosis? Based on what criteria? 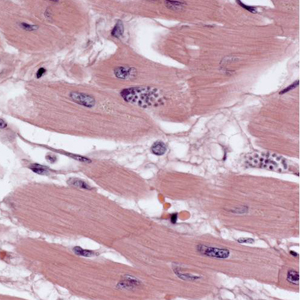 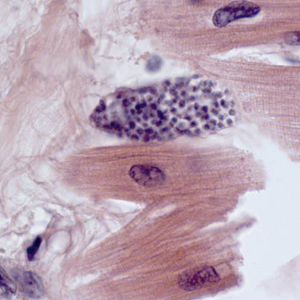 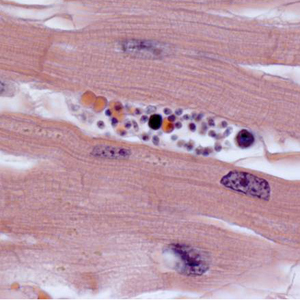 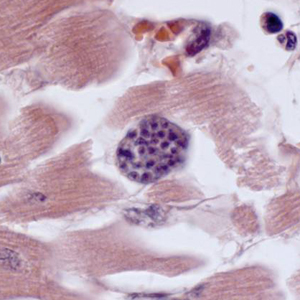 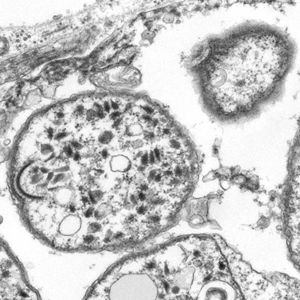 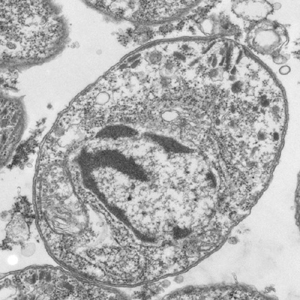 This was a case of tissue sarcocystosis caused by a member of the genus Sarcocystis. Figures A–D showed the tissue sarcocysts containing numerous bradyzoites. The images were suggestive of an apicomplexan parasite, but further testing was done to rule-out other parasites such as Toxoplasma gondii. The electron microscopy imaging gave further support for an apicomplexan, showing morphologic features of the apical complex, including conoid (CN, Figures E and F), microtubules (MT, Figure E), and the polar ring (PR, Figure E). Sequencing analysis of the 18SrRNA gene indicated that it was a species of Sarcocystis.

Sarcocystis species require two vertebrate hosts to complete their life cycle. Humans are the definitive hosts for S. hominis and S. suihominis which use cattle and pigs, respectively, as intermediate hosts. However, when humans ingest sporocysts of non-human Sarcocystis spp., they assume the role of the intermediate host, and the parasites manifest as tissue sarcocysts as seen in this case. 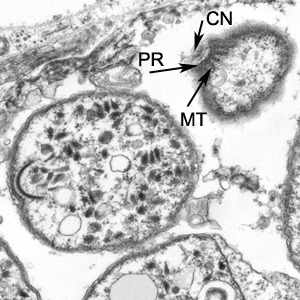 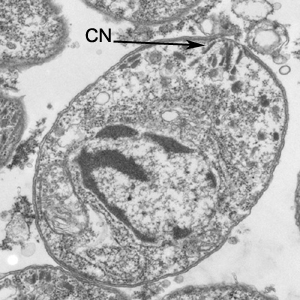