A 43-year-old man from Brazil traveled to Angola and other African countries for business for two weeks. Approximately one week after returning to Brazil, he noticed a small ulcerative lesion on his neck. He recalled being bitten by insects at the site of the lesion, but could not remember if the bites took place in Africa or South America. Two months later, he began to experience fever, headache, and fatigue and sought medical attention. His doctor also noticed that he had swollen lymph nodes. Blood was collected in EDTA for routine work-up. Figures A and B show what was observed at 1000x magnification on a Giemsa-stained smear made from the EDTA blood. What is your diagnosis? Based on what criteria? 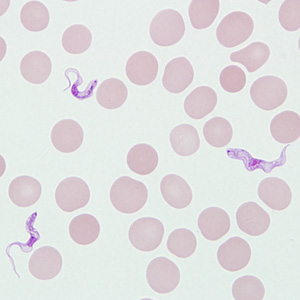 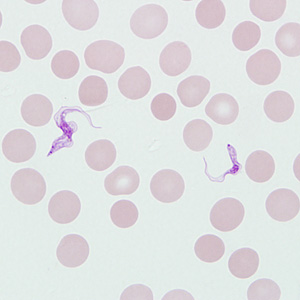 This was a case of African trypanosomiasis (African Sleeping Sickness) caused by Trypanosoma brucei. Morphologic features seen in the images included:

In addition to what was shown in the images, the patient also presented an ulcerative lesion at the site of a bite which is consistent with a trypanosomal chancre. Trypanosoma b. rhodesiense and T. b. gambiense are morphologically indistinguishable and can only be identified to the species-level by isoenzyme analysis or PCR.