A 45-year-old man from Kenya who was visiting relatives in the New England area had complaints of fever and headache. He was taken to a nearby hospital for medical evaluation. A Giemsa-stained thin blood smear was prepared and examined at 1000x magnification. Figures A and B show what was observed in low numbers on the smear. What is your diagnosis? Based on what criteria? What, if any, other tests should be performed? 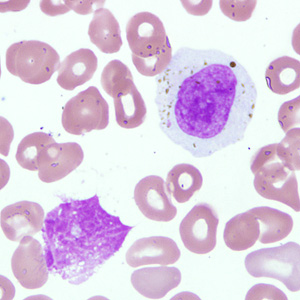 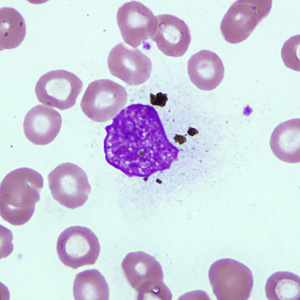 The objects shown in the figures were white blood cells, but contained ingested pigment (black arrows, Figures A and B) from Plasmodium sp. parasites. Detection of pigment in macrophages can be an indicator of the presence of Plasmodium sp. In cases where the number of parasites is very low, a thick smear can prove helpful in demonstrating the presence of parasites. It is recommended that both thick and thin blood smears be prepared, and at least 300 fields at 1000x magnification be examined as routine. If no parasites are found, follow-up smears should be prepared and examined over a 36-hour period. In this case, a second smear was prepared, stained, and examined, and rare ring-stage parasites were found. The use of molecular techniques such as PCR can also be very helpful to determine the species of Plasmodium, and thus facilitate the most appropriate treatment regimen. Figure C shows and example of what was found on the follow-up smear. The black arrows indicate ingested pigment; the blue arrow indicates a single ring-stage parasite.