A 28-year-old man had loss of appetite, weight loss, and intermittent diarrhea approximately one week after attending a family reunion located on a farm in the mid-western U.S. He sought medical attention with his primary care provider who collected a stool specimen for ova and parasite (O&P) examination using a single-vial fixative system. A stool smear was prepared, stained with trichrome, and examined at 1000x magnification. The objects shown in Figures A–D were observed in moderate numbers. Objects in Figures C and D were 12 and 15 micrometers in diameter respectively. The object in Figure E was 4 micrometers in diameter. What is your diagnosis? Based on what criteria? 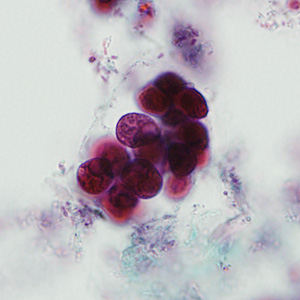 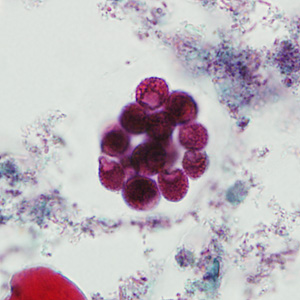 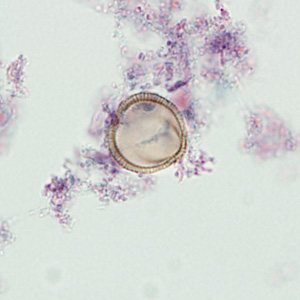 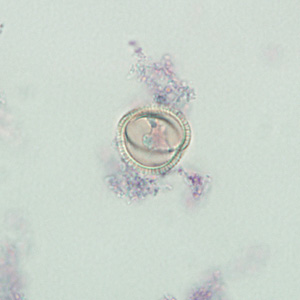 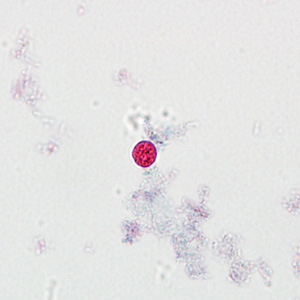 The objects shown in this case were artifacts, and the correct diagnosis for this case was no parasites found (NPF). The structures shown in Figures A, B, and E appeared to be plant or fungal elements. The small, round objects somewhat resembled the oocysts of Cryptosporidium sp. However, oocysts would not stain red in a trichrome-stained smear as they would in an acid-fast stained smear. Also, they appeared to mostly be found within thin-walled sacs. The objects shown in Figures C and D were pollen grains. The outer layer resembled the striated shell of the eggs of Taenia sp., however they lacked an oncosphere (including presence of hooklets) and were too small (eggs of Taenia spp. are 30-35 micrometers in diameter).