A 29 year-old man with travel history to Costa Rica, Belize, and Nicaragua developed an ulcerative lesion on his right foot. The lesion did not respond to over-the-counter medications so the patient went to his health care provider. He was referred to an infectious disease specialist due to his travel history. A biopsy was performed near the edge of the lesion and the tissue specimen was sent to a reference laboratory for testing. The tissue specimen was divided into two parts, one of which was used to inoculate a NNN slant for culture. The other part was used to prepare a touch-prep smear, which in turn was fixed with methanol and then stained with Giemsa. Figures A and B show what was observed on that smear. What is your diagnosis? Based on what criteria? 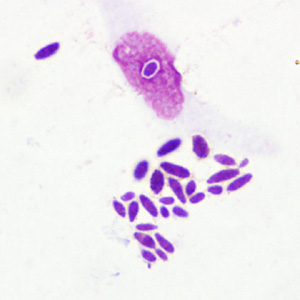 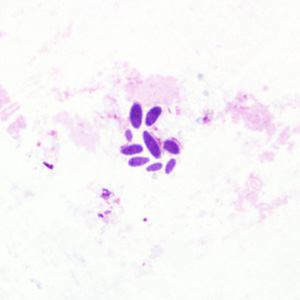 The oval objects shown in this case resembled some type of fungal element and may have represented contamination of the biopsy specimen. The absence of nuclei and kinetoplasts in the oval structures confirmed they were not amastigotes of Leishmania spp. Even though travel history of the patient was to countries that have areas endemic for leishmaniasis, a diagnosis could not be confirmed based on the images presented. The inoculated culture was also contaminated with the fungus and had to be discarded. It was recommended that a new biopsy be obtained and tested.