A survey was conducted to determine the prevalence of geohelminth infections in school-age children living in Haiti. The laboratory aspect of the survey consisted of processing stool specimens which were collected in 10% formalin. Per protocol, the processing included performing an FEA (formalin-ethyl acetate) concentration and examination of a wet mount. The following images show what was found in one of the specimens. All images (Figures A–C) were taken at 200x magnification; Figures A and B are of the same field but at different focal planes. The lemon or barrel-shaped objects measured 50-55 micrometers in length. What is your diagnosis? Based on what criteria? 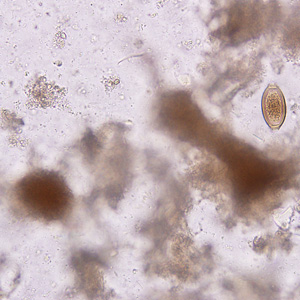 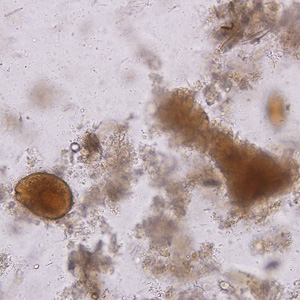 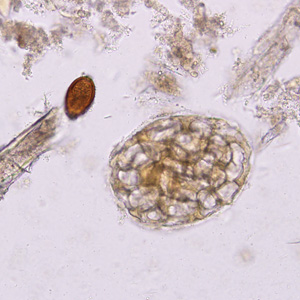 This was a mixed case of trichuriasis and balantidiasis based on the two parasites identifiable in the images: Trichuris trichiura eggs and a Balantidium coli trophozoite. Figures A and B, which were in the same field but different focal planes, showed both parasites. Diagnostic features shown in the images included:

The large object alongside the T. trichiura egg in Figure C was an artifact (plant cell).