A woman found a worm in her laundry basket and contacted the health department in her state for assistance. She reported small children in the household, as well as dogs and cats. The worm was examined at the state health laboratory; it measured approximately 7.5 centimeters in length (Figure A). Eggs were removed from the worm and an iodine-stained wet mount was made. Images were sent to DPDx for diagnostic assistance. Figure B was taken at 100× magnification. Figure C was taken at 400× magnification and measured approximately 75 micrometers. What is your diagnosis? Based on what criteria? What other feature(s) would be helpful for identification? 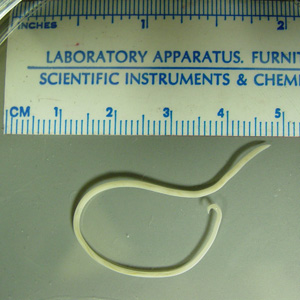 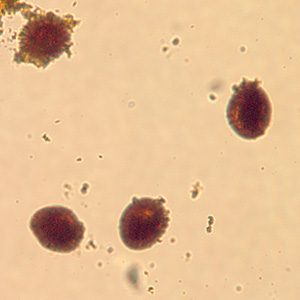 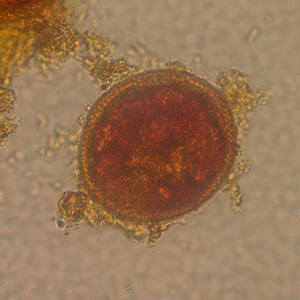 The specimen was identified as a nematode belonging to the genus Toxocara. Diagnostic features were:

Based on the images, identification to the species level was not possible. The specimen was in poor condition upon receipt by the public health laboratory, and the worm was discarded after the images were taken. The eggs were in the size range for the two most commonly encountered species: T. canis (80-85 micrometers by 75 micrometers) and T. cati (65-75 micrometers). Both species may be found in cats and T. canis can also be found in dogs, so the knowledge that cats and dogs were present in the household was not very helpful in identifying the worm at species level. Examination of the anterior end of the worm and comparing the shape of the cervical alae is the best way to identify the three parasites at species level. Examination of the anterior end should also reveal three’lips’, characteristic of the Ascarididae.

This case and the images were kindly contributed by the Alaska State Public Health Laboratory.