A 52-year-old man was seen at a hospital for fever and chills. He reported travel to wooded areas in the Northeastern United States and noted previous tick bites. For the last case study of the year, you do not have to make a diagnosis since Babesia sp. was identified on a Giemsa-stained blood smear by the hospital laboratory staff. However, the attending physician would like a parasitemia value to determine how best to manage the care and treatment of the patient. Using the images provided, please calculate the parasitemia. Happy holidays! 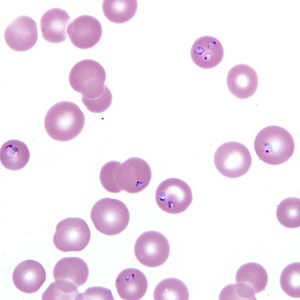 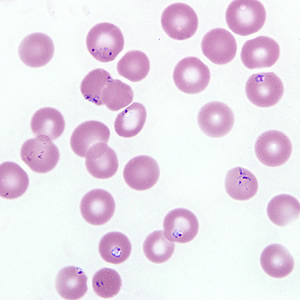 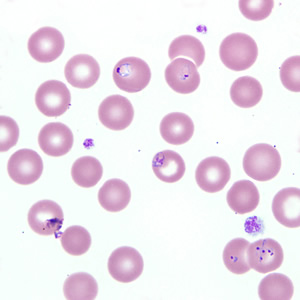 The parasitemia for this case of babesiosis was approximately 23%. For this case, a stained thin smear was examined and parasitemia was expressed as the percentage of red blood cells (RBCs) infected, not the number of parasites observed. Counting the number of parasites could lead to an inaccurately high value and may lead to more aggressive therapy than necessary. When using this approach, report the number of infected RBCs per 100 RBCs; a minimum of 500-2,000 RBCs should be counted. Due to the constraints of presenting this as a case study, we only showed three images with about 30 RBCs each. The values for the images should be approximately as follows: