A 42-year-old man complained of diarrhea for 2 weeks following an international assignment that included travel to countries in Southeast Asia and the Indian subcontinent. He explained to his physician that his symptoms began shortly before he returned to the United States. An ova and parasites (O & P) examination was ordered, and Figures A-D show what was observed. Figures A and B are from a wet mount stained with Lugol’s iodine, and Figures C and D are from a trichrome stained fecal smear. The objects ranged in size from 20-25 micrometers. What is your diagnosis? Based on what criteria? 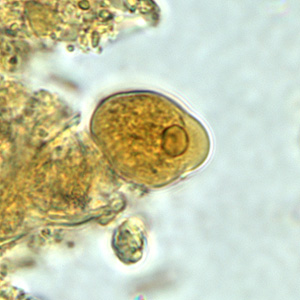 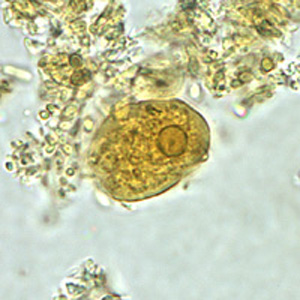 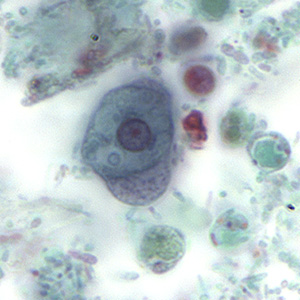 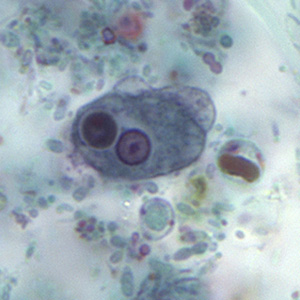 This was a case of amebiasis caused by Entamoeba histolytica. Blastocystis hominis was also observed in Figures C and D. Diagnostic features were:

In addition to seeing ingested red blood cells in trophozoites, molecular tools such as PCR can also be used to make a confirmatory diagnosis of amebiasis. Also shown in the images is Blastocystis hominis (black arrows, Figure D). Diagnostic features of B. hominis included the appearance of a central body, surrounded by a thin rim of cytoplasm containing up to six nuclei. The size of the objects was also within range for B. hominis (5-30 micrometers). 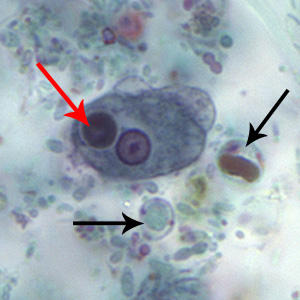