A 25-year-old man living in South America became ill with intestinal cramping and watery diarrhea. Stool specimens were collected and an O & P exam was ordered by his physician. The lab performed an FEA concentration on the sample, prepared wet mounts, and examined them using UV fluorescence microscopy. Images were captured and submitted to DPDx/CDC. Figures A and B were taken at 400× magnification. What is your diagnosis? Based on what criteria? 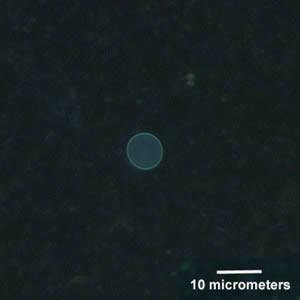 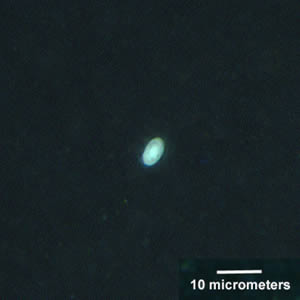 This was a case of cyclosporiasis caused by Cyclospora sp. (most likely Cyclospora cayetanensis). The object in Figure B is an artifact. Diagnostic features were:

There are numerous items that may fluoresce when using UV microscopy so careful observation of morphologic features under bright field microscopy is equally important when examining specimens (see February 2001’s case study 53 to see an image captured from bright field DIC microscopy). A secondary smear stained using modified Kinyoun’s acid-fast, or the hot safranin technique, is an alterative confirmatory technique, which also allows for a permanent record of the specimen.