Cestodes (tapeworms) in the genus Mesocestoides are common in carnivores but only very rarely infect humans. Although Mesocestoides spp. are classified as Cyclophyllidea, they share biological characteristics with Pseudophyllidea. Some life cycle features remain unknown. Species implicated in zoonotic infections include M. lineatus and M. variabilis, though the relationships between species in this genus is a status of ongoing research. 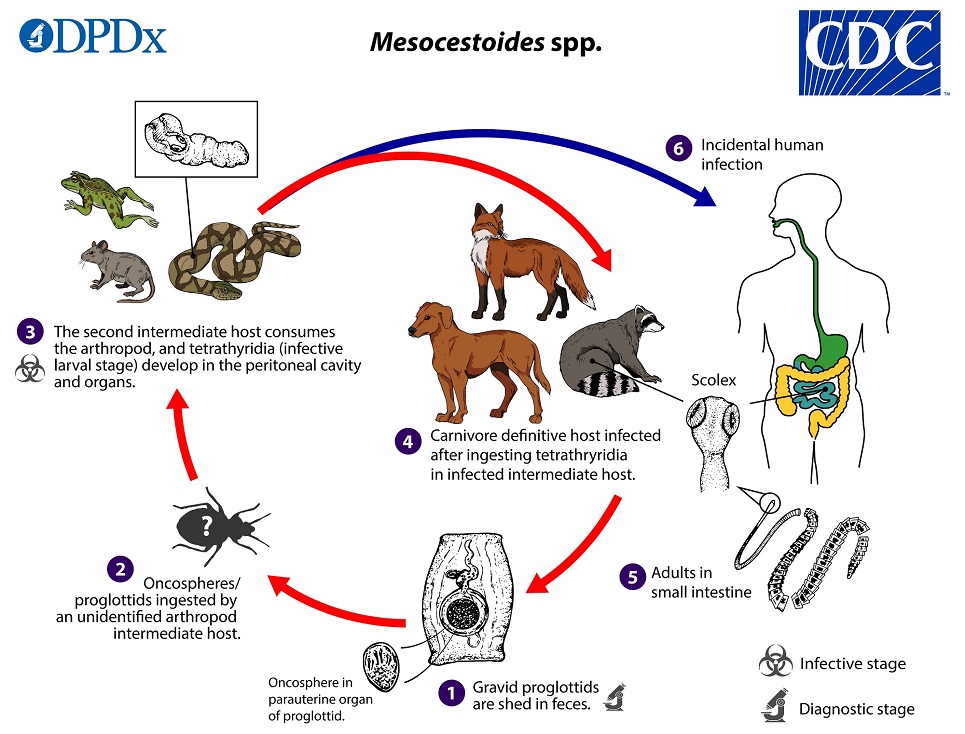 . Eggs lack a true shell, possessing only a thin embryophore enveloping a six-hooked oncosphere. The first intermediate host (presumed to be an arthropod)

, the larva develops into an infective larva (tetrathyridium) in the peritoneal cavity or in viscera. Asexual proliferation of tetrathyridia within the intermediate host has been observed occasionally in some Mesocestoides spp., although it is not known if this represents an abnormal state. The carnivorous definitive host ultimately becomes infected after eating tissue infected with tetrathyridia

. Upon ingestion, the scolex of the tetrathyridium evaginates and becomes anchored to the small intestinal mucosa, where it matures into an adult cestode. Gravid proglottids are passed typically 2-3 weeks post infection in the natural host. Humans are believed to become infected after eating undercooked meat or viscera containing tetrathyridia

The normal definitive hosts are terrestrial carnivores, including canids, felids, procyonids, mustelids, and opossums. The actual host specificity of Mesocestoides spp. is poorly defined due to extensive morphological overlap among species.

Tetrathyridia have been recovered from hundreds of intermediate host species of mammals (particularly rodents), birds, amphibians, and reptiles. Domestic canids and occasionally felids, which typically serve as definitive hosts, may also become infected with tetrathyridia as intermediate hosts.

Mesocestoides spp. occur broadly in wild and domestic animals and have been found on every inhabited continent except for Australia. M. lineatus is an Old World species reported from Asia, Europe, and Africa. M. variabilis is endemic to North America.

Zoonotic infections have been identified in Japan and Korea (M. lineatus) following ingestion of raw snake and turtle liver. Cases of M. variabilis have been reported from the United States.

To date, no larval-stage infections (tetrathyridia) have been identified in humans. 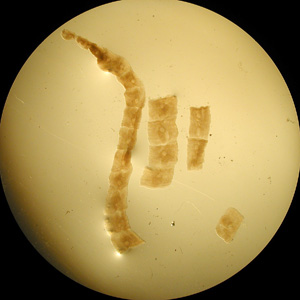 Figure A: Proglottids of Mesocestoides sp., collected from the stool of a dog. 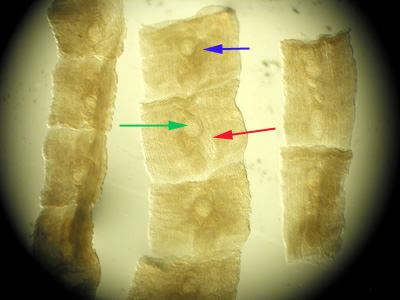 Figure B: Higher magnification of the proglottids in Figure A, showing the uterus (red arrow), ovary (blue arrow) and parauterine organ (green arrow). 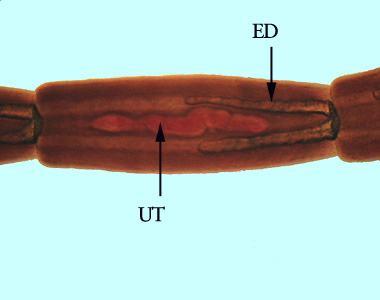 Figure C: Proglottid of Mesocestoides sp. stained with carmine (lateral view). Shown in this specimen are the uterus (UT), which is a simple tube parallel to the body axis, and excretory ducts (ED). 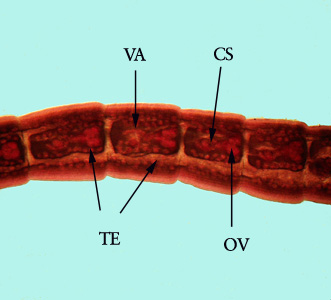 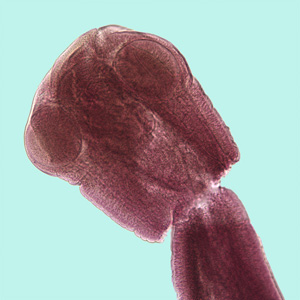 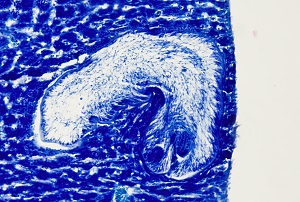 Figure A: Tetrathyridium of Mesocestoides sp. in the liver of a laboratory-infected mouse, Giemsa stain. 100x magnification. 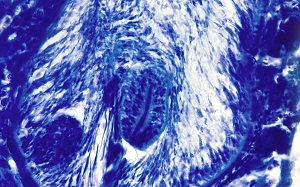 Figure B: Closer view of the suckers from the specimen in Figure A. 400x magnification. 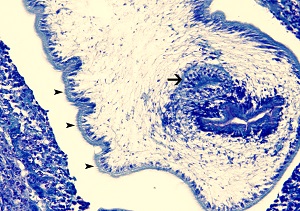 Figure C: Another view of a tetrathyridium from the same specimen. Features typical of cestodes are visible, such as the sucker (arrow) and microtriches (darts), which are fine hair-like projections of the cuticle. Calcareous corpuscles may be seen in some specimens. 200x magnification. 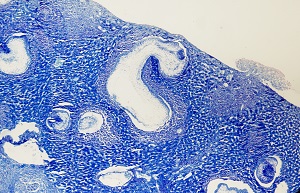 Standard protocols for the processing of stool samples apply.