The nematode (roundworm) Capillaria hepatica (=Calodium hepaticum) causes hepatic capillariasis in humans. Nomenclature varies in use globally and by discipline; Capillaria hepatica is most frequently used in medical literature. C. hepatica is a zoonotic parasite with a low host specificity; it primarily exists in rodent and carnivore hosts. Both true and spurious infections occur in humans. 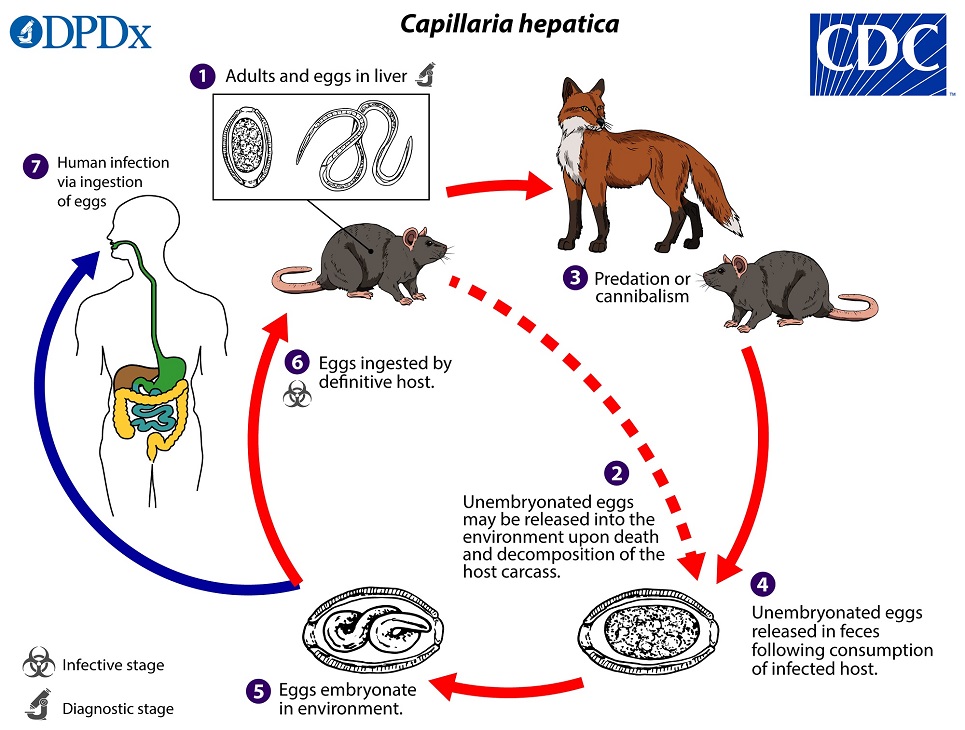 Capillaria hepatica has a direct life cycle, with no intermediate host. It can develop with only one definitive host, but likely requires two hosts to complete the life cycle.  Adult worms are located deep within the liver parenchyma of the host, and lay hundreds of eggs in the surrounding parenchymal tissue

. The eggs trapped in the parenchyma can not be passed in the feces of the host, and remain in the liver until the animal dies

, or more likely, is eaten by a predator or scavenger

.  Eggs ingested by scavengers are unembryonated (not infectious) and are passed in through the digestive tract into and out in feces, providing an efficient mechanism to release eggs into the environment; this is ecologically the most likely primary route of transmission

.   Eggs embryonate in the environment

, where they require air and damp soil to become infective. Under natural conditions, embryonation is slow and may take between 6 weeks and 5 months. The cycle continues when embryonated eggs are eaten by a suitable mammalian host

. Infective eggs hatch in the intestine, releasing first stage larvae.  The larvae penetrate the intestinal wall and migrate via the portal vein to the liver parenchyma within 3-4 days. Larvae take about 3-4 weeks to mature into adults and mate. Humans are usually infected after ingesting embryonated eggs in fecally-contaminated food, water, or soil

Notably, the presence of C. hepatica eggs in human stool during routine ova-and-parasite (O&P) examinations indicates spurious passage of ingested eggs, and not a true infection.  Diagnosis in humans is usually achieved by finding adults and eggs in biopsy or autopsy specimens.

C. hepatica has a low host specificity, but rodents such as rats are generally believed to be the most typical host. Infections have also been identified in wild and domestic carnivores (e.g. foxes, dogs, cats), lagomorphs, swine, primates, and humans.

C. hepatica has a broad global distribution in wildlife. Human cases have originated from all inhabited continents except for Australia, although there it exists in wildlife.

Hepatic capillariasis is rare in humans. It typically manifests as an acute or subacute hepatitis with peripheral leukocytosis and eosinophilia, hepatomegaly, and persistent fever (which may be as high as 40℃). The deposition of eggs in the liver parenchyma causes granuloma formation and liver necrosis, which in heavy infections can lead to potentially fatal liver dysfunction. The true incidence in humans may be underestimated due to the nonspecific clinical presentation and difficulty of diagnosis.

Capillaria hepatica eggs are 50—70 µm long by 30—35 µm wide. They have a striated shell and shallow polar prominences. Superficially, they may resemble Trichuris spp. eggs but are more ellipsoid versus barrel shaped, with smooth instead of protruding poles. Eggs are unembryonated when seen in human feces (an indication of a spurious infection). Diagnosis of true infections is usually made by finding eggs in biopsy or autopsy specimens. 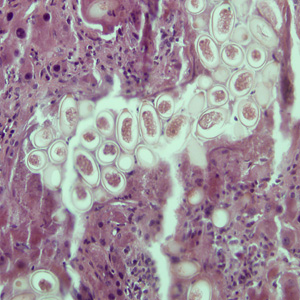 Figure A: Eggs of C. hepatica in liver stained with hematoxylin and eosin (H&E). 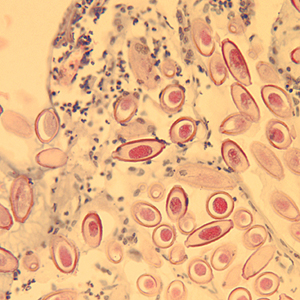 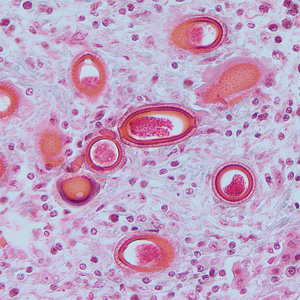 Capillaria hepatica adults are slender, delicate nematodes that may reach up to 20mm in length and measure only 70—100 µm at the anterior end. However, they are rarely seen intact due to a relatively short life span (40—60 days) from maturation to death in the parenchyma of the liver. 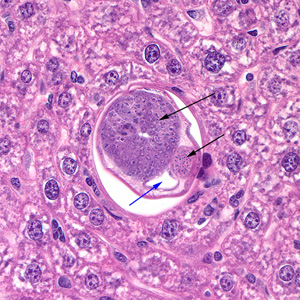 Figure A: Cross section of a male C. hepatica in liver tissue, stained with hematoxylin and eosin (H&E). Note the presence of the intestine (blue arrow) and the coiled sections of the testes (black arrows). 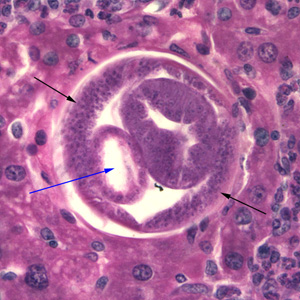 Figure B: Cross section of C. hepatica in liver tissue, stained with H&E. Note the presence of the intestine (blue arrow) and bacillary bands (black arrows). 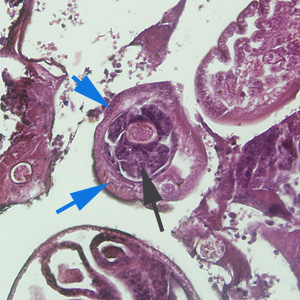 The specific diagnosis of C. hepatica infection is based on demonstrating the adult worms and/or eggs in liver tissue at biopsy or necropsy. Importantly, the identification of C. hepatica eggs in the stool is a spurious finding, which does not result from infection of the human host, but from ingestion by that host of livers from infected animals.

Standard precautions apply for processing stool samples and tissue sections. C. hepatica eggs in stool require time in the environment to develop to infectivity and thus fresh stool samples do not represent an infection risk, if samples from spurious infections happened to be examined.