Gongylonema is a genus of spirurid nematodes which includes the veterinary parasite G. pulchrum (“gullet worm” or “stitch worm”) along with several other parasites of mammals and birds. Incidental human infections with Gongylonema are rare, and species-level identifications are difficult and seldom confirmed. 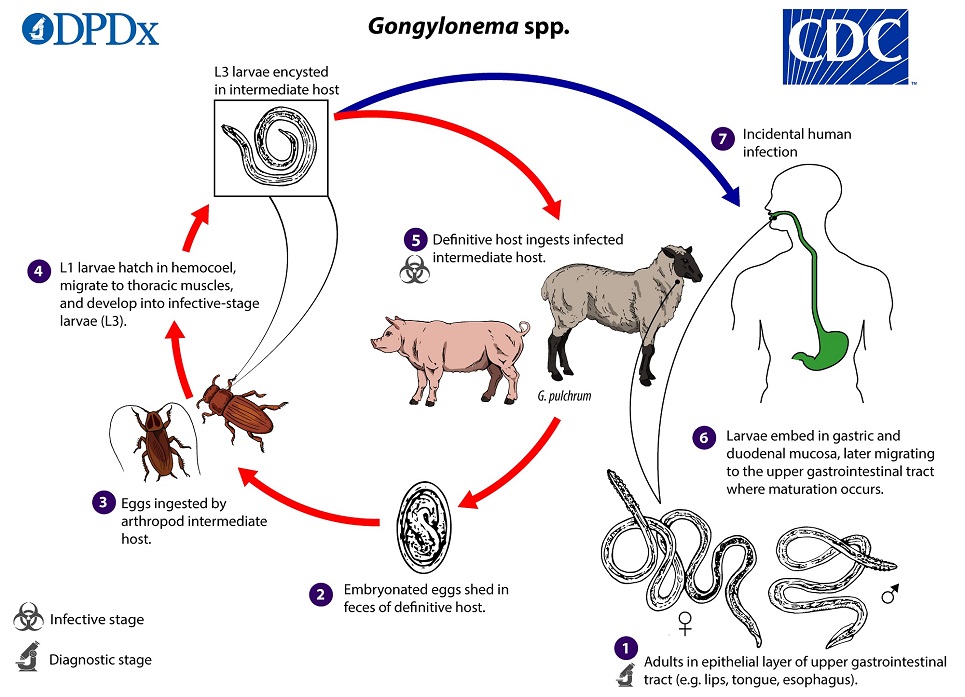 Adult Gongylonema inhabit the upper gastrointestinal tract of the definitive host in sites such as the mouth, esophagus, rumen, and stomach

. The long, thin adults are found in shallow tunnels in the squamous epithelial surfaces of these tissues; the female produces thick-shelled, embryonated eggs containing first-stage (L1) larvae. Expelled eggs are released from the tunnels during epithelial desquamation, and are carried down the gastrointestinal tract and shed in the feces

. Larvae develop in the hemocoel of the intermediate host, eventually becoming encapsulated as infective third-stage (L3) larvae in the thoracic muscles

. Larvae are released in the stomach, which embed in the gastric or duodenal mucosa, and eventually migrate to the upper gastrointestinal tract after 2—3 months

. Migration of larvae often creates characteristic zig-zag or sinusoidal tracks in the affected epithelial tissues. Maturation is completed in the upper gastrointestinal tract.

, either intentionally or accidentally, in contaminated food or water. In these cases, worms have been found in the mucosal tissues of the lips, cheek, tongue, tonsils, gums, and occasionally esophagus. A few cases of spurious egg passage have been documented, which may be due to the inadvertent consumption of adult Gongylonema in certain types of meat (e.g. chicken gizzards, pork tongue).

Gongylonema pulchrum is a common parasite of domestic swine, sheep, goats, and cattle, amongst other wild ungulate hosts. The numerous other Gongylonema species are usually parasites of birds (e.g. G. ingluvicola, G. congolense) and rodents (e.g. G. neoplasticum, G. aegypti), but species have also been reported in various other mammalian hosts.

Many coprophagous beetles across several families (Scarabaeidae, Tenebrionidae, Hydrophilidae, and Histeridae) and some cockroaches (Blattella spp.) are known to be competent intermediate hosts for various Gongylonema spp.

Many Gongylonema spp. have a cosmopolitan distribution, particularly species associated with livestock. Sporadic zoonotic infections have been reported worldwide.

The main symptom of Gongylonema infection is the sensation of movement or a foreign body in the oral cavity. Sometimes, worms may be extracted by the patient with fingers or a fine needle. Other clinical manifestations include mild inflammation and ulceration of affected sites, which resolve upon removal of the parasite.

Gongylonema spp. are long and thread-like spirurid nematodes. Mature females are up to 145 mm long and 0.5 mm wide, and males are slightly smaller (62 mm long, 0.3 mm wide); terminal size varies widely depending on host. The most salient feature of these nematodes is the presence of raised cuticular bosses or plaques arranged in longitudinal rows on the anterior end of the worm. The cuticle is also finely striated down the entire length of the body. Eggs are present in the uteri of females; they are ellipsoid in shape (60 x 30 µm) with thick, transparent shells and contain a first-stage larva. Males possess asymmetrical caudal alae and unequal spicules. 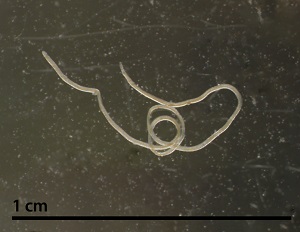 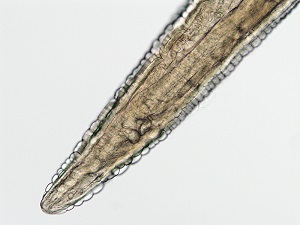 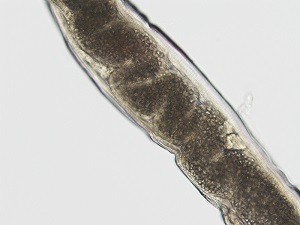 Figure C: Uterus of the Gongylonema sp. female shown in figure B. The uterus is filled with embryonated eggs containing L1 larvae. The fine striations of the cuticle are also visible. 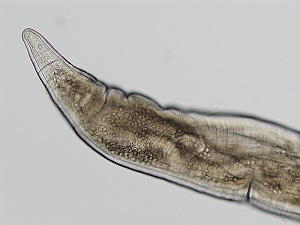 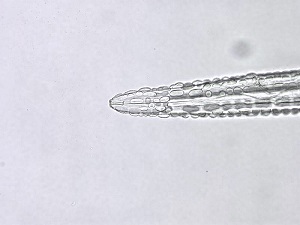 Figure E: Another example of a female Gongylonema sp., extracted from the cheek of a human patient. The anterior end possesses many cuticular bosses, and has a simple mouth without lips. 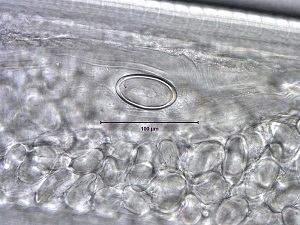 Figure F: Embryonated egg in the uterus of a Gongylonema female. A first-stage larva is visible inside. 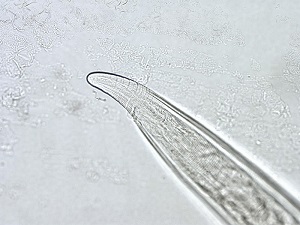 Diagnosis is via morphological examination of adult Gongylonema specimens extracted from patients. Species-level identification is challenging and thus most cases are reported as Gongylonema sp. Molecular tools may be useful in confirming species identity.

Since most human infections involve single worms, eggs are not generally expected to be present in stool. However, in some cases gravid females were present, but it is not known if eggs would have been shed in these patients. As spurious passage of eggs may be possible following ingestion of adult worms in meat, examination of additional stool specimens is warranted if eggs suspicious for Gongylonema are detected in stool.

Allen, J.D. and Esquela-Kerscher, A., 2013. Gongylonema pulchrum infection in a resident of Williamsburg, Virginia, verified by genetic analysis. The American journal of tropical medicine and hygiene, 89(4), pp.755-757.