Gnathostoma spp. are spirurid nematodes characterized by the presence of a prominent cephalic bulb and body spines, and are typically associated with carnivorous mammal definitive hosts. Humans are accidental hosts; the only forms found in humans are larvae or immature adults that never reach reproductive maturity. Most human infections are caused by G. spinigerum; other species confirmed to be zoonotic include G. hispidum, G. doloresi, G. binucleatum, and G. nipponicum. Two unconfirmed human cases of G. malaysiae infection have been reported from Myanmar. 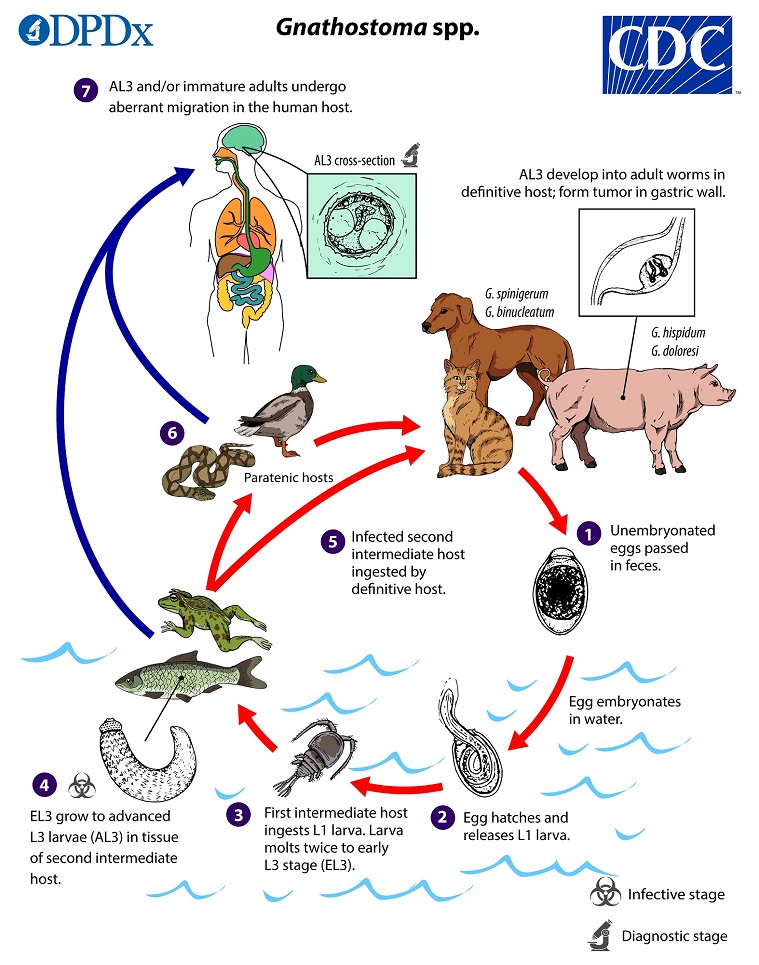 . Following ingestion of the copepod by a suitable second intermediate host, the EL3 migrate into the tissues of the host and develop further into advanced L3 larvae (AL3)

. When the second intermediate host is ingested by a definitive host, the AL3 develop into adult parasites in the gastric wall

. Alternatively, the second intermediate host may be ingested by a paratenic host, in which the AL3 do not develop further but remain infective

. Humans become infected by eating raw or undercooked meat of second intermediate or paratenic hosts containing AL3. In the human host, AL3 migrate in various tissues and may develop into immature adults but never achieve reproductive maturity; they may range in size from 2 mm to about 2 cm depending on the species and the extent of development

. Whether humans can become infected by drinking water that contains infected copepods is not clear.

Carnivorous and sometimes omnivorous mammals serve as definitive hosts for Gnathostoma spp., including canids and felids for G. spinigerum and G. binucleatum, swine for G. hispidum and G. doloresi, and weasels for G. nipponicum.

Gnathostoma spinigerum, G. doloresi, and G. hispidum are endemic in East and Southeast Asia. In tropical Australia, G. spinigerum and G. hispidum have been reported sporadically in definitive hosts and several human cases of Gnathostoma infection that were diagnosed solely on the basis of serologic testing have been reported. G. doloresi is found in swine in parts of Central and Eastern Europe. G. nipponicum has been identified in Japan and China only. Occasional cases of gnathostomiasis associated with exposures in Africa (Zambia, Botswana, and Tanzania) have been reported; the causative species was identified for only one of the cases (as G. spinigerum for a case in a tourist who had visited Botswana).

The clinical manifestations in humans are caused by migration of the advanced L3 larvae or immature adults, which can invade a variety of tissues. Eosinophilia is commonly observed during initial larval migration (e.g., in the skin and subcutaneous tissue) but is not always present in chronically infected persons. Cutaneous gnathostomiasis, the most common form of the disease, results from migration of the parasite in subcutaneous tissue, which can be associated with intermittent migratory swellings (often on the torso or upper limbs). These swellings can be erythematous, pruritic, and/or painful and may recur over months or years if the infection is not treated. In some patients, the parasite migrates near the surface of the skin and can be extracted or may spontaneously emerge.

Migration in deeper tissues (such as pulmonary, gastrointestinal, genitourinary, auricular, ocular tissue, or the central nervous system) is referred to as visceral gnathostomiasis or larva migrans profundus. Clinical manifestations are highly variable and depend in part on which tissues are affected. Neurognathostomiasis can be associated with potentially fatal eosinophilic meningitis and myeloencephalitis, and ocular gnathostomiasis may cause vision loss. 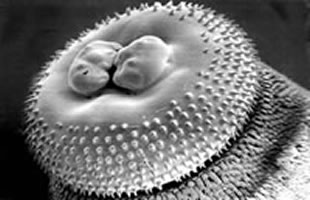 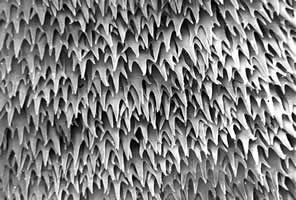 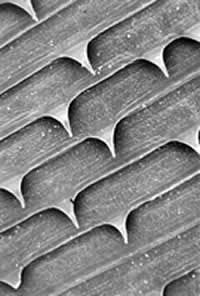 Diagnostic characteristics of immature Gnathostoma worms found in humans include the presence of large, cavernous lateral chords; multinucleated intestinal cells (some species); pigmented granular material in the intestinal cells; and spines on the cuticle (although some species do not have spines on the entire length of the body). In histologic sections, some Gnathostoma spp. can be differentiated from each other on the basis of the morphologic features of their intestinal epithelial cells. 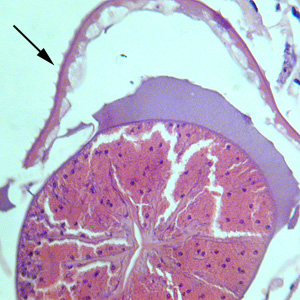 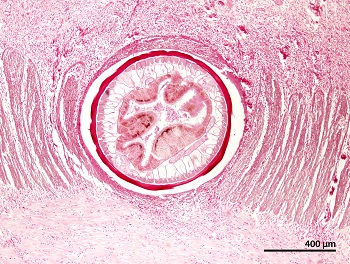 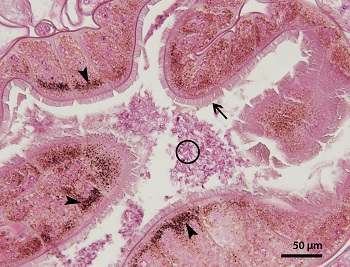 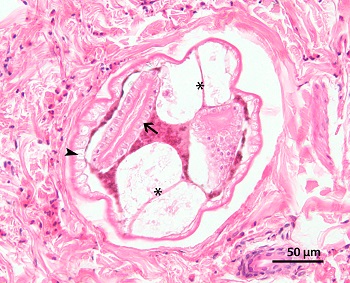 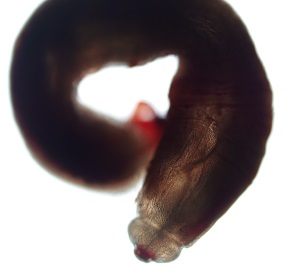 Figure A: Gnathostoma spinigerum immature male worm extracted from a person with cutaneous gnathostomiasis. In worms extracted from mammalian hosts, red coloration is common and is caused by staining from oxidized hemoglobin. Overall length is 0.66 cm. 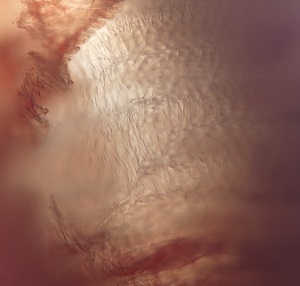 Figure B: Three-pointed spines in the anterior portion of the worm in Figure A. The shape and location of spines along the body are the primary means of species-level diagnosis within the Gnathostoma genus. 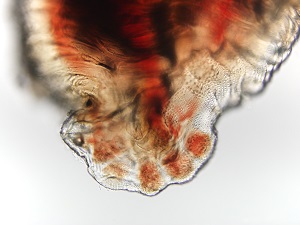 Figure C: Posterior extremity of the worm in Figure A. Note the presence of broad caudal alae, with large, round pedunculate papillae. The surface of the caudal alae is covered with single-pointed spines. 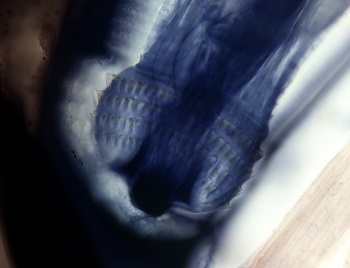 Morphologic diagnosis is achieved by identifying Gnathostoma larval forms or immature adults in a biopsy specimen or after extraction from a cutaneous lesion. In histologic sections, Gnathostoma spp. often can be differentiated from each other on the basis of the morphologic features of their intestinal epithelial cells.

Serologic tests for Gnathostoma infection are not available at CDC or elsewhere in the United States. Please contact DPDx for contact information for laboratories in Thailand and Japan that perform serologic testing.

Standard laboratory precautions apply for the processing and examination of histologic sections. No stages of Gnathostoma spp. examined in diagnostic laboratories represent an infectious risk.