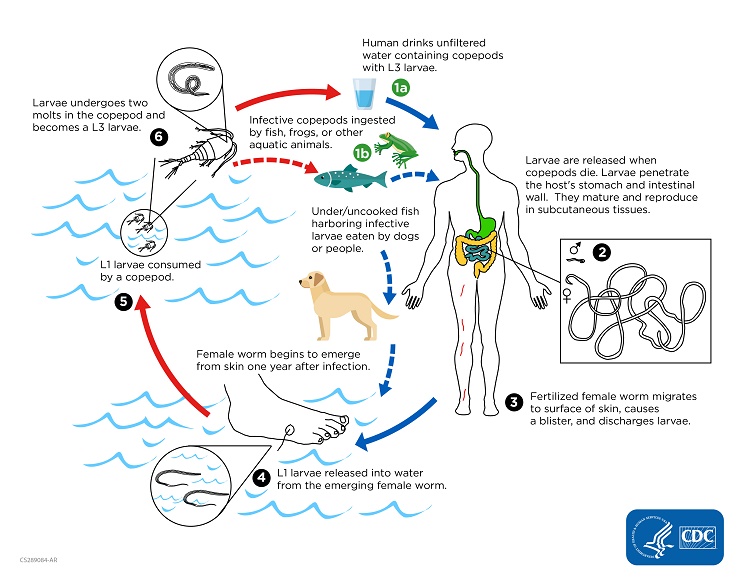 . Following ingestion, the copepods die and release the larvae, which penetrate the host stomach and intestinal wall and enter the abdominal cavity and retroperitoneal space

. After maturation into adults and copulation, the male worms die and the females (length: 70 to 120 cm) migrate in the subcutaneous tissues towards the skin surface

. Approximately one year after infection, the female worm induces a blister on the skin, generally on the distal lower extremity, which ruptures. When this lesion comes into contact with water, a contact that the patient seeks to relieve the local discomfort, the female worm emerges and releases larvae

. The larvae are ingested by a copepod

. Ingestion of the copepods closes the cycle

An ongoing eradication campaign has dramatically reduced the incidence of dracunculiasis, which is now restricted to rural, isolated areas in a narrow belt of African countries.

The clinical manifestations are localized but incapacitating. The worm emerges as a whitish filament (duration of emergence: 1 to 3 weeks) in the center of a painful ulcer, accompanied by inflammation and frequently by secondary bacterial infection. 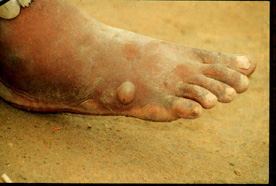 Figure A: The female Guinea worm induces a painful blister. 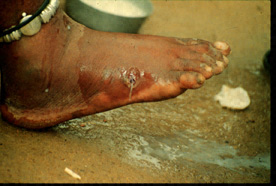 Figure B: after rupture of the blister, the worm emerges as a whitish filament in the center of a painful ulcer which is often secondarily infected. (Images contributed by Global 2000/The Carter Center, Atlanta, Georgia).

The clinical presentation of dracunculiasis is so typical, and well known to the local population, that it does not need laboratory confirmation. In addition, the disease occurs in areas where such confirmation is unlikely to be available. Examination of the fluid discharged by the worm can show rhabditiform larvae. No serologic test is available.

Treatment information for dracunculiasis can be found at: https://www.cdc.gov/parasites/guineaworm/treatment.html