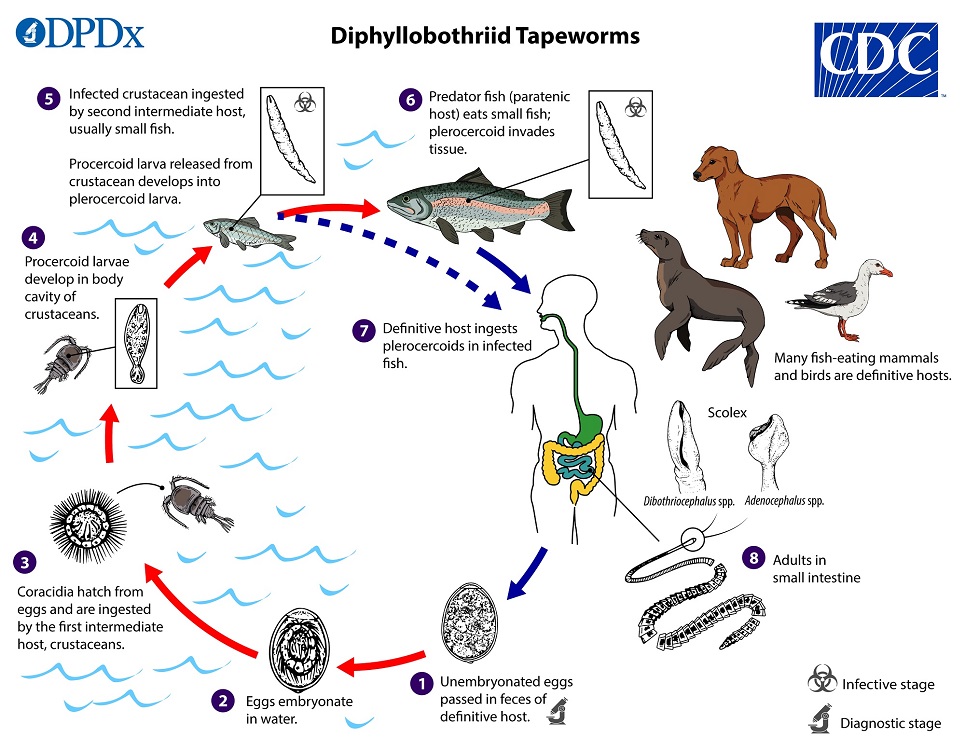 Intermediate and paratenic hosts include a wide diversity of freshwater and marine fishes, commonly perch and pike for Dibothriocephalus latus and salmon for D. nihonkaiense.

Definitive host specificity among the medically important diphyllobothriids is low. In addition to humans, other carnivorous, fish-eating mammals and a few birds can also serve as definitive hosts. Non-human definitive hosts for D. latus, D. nihonkaiense, and D. dendriticus include a variety of carnivorous mammals (canids, felids, bears, and mustelids); of these, only D. dendriticus is known to parasitize birds, particularly gulls. Pinnipeds are the natural definitive host for Adenocephalus pacificus and it has also been found in dogs and jackals. Among the cetacean-associated species, Diphyllobothrium stemmacephalum is found mostly in dolphins and porpoises, and D. balaenopterae in whales.

Dibothriocephalus latus has a relatively wide distribution, but is most common in circumpolar regions; it is also known to occur very rarely in South America, perhaps through importation and aquaculture. D. nihonkaiense is endemic to the northern Pacific Ocean and cases are common in East Asian countries where raw fish dishes are popular. D. dendriticus has a generally holarctic distribution and is most prevalent in the arctic. While found in hosts across the Pacific Ocean, a large majority of Adenocephalus pacificus cases occur on the Pacific coast of South America and one case has occurred in South Australia. Diphyllobothrium stemmacephalum and D. balaenopterae are considered to have a cosmopolitan marine distribution.

Note that the global trade and consumption of wild-caught fish leads to human cases occurring regularly outside of naturally endemic regions.

Diphyllobothriasis can be a long-lasting infection, up to 25 years. Most infections are asymptomatic but gastrointestinal symptoms may occur in some patients. Aberrant migration of proglottids can cause cholecystitis or cholangitis. Rarely, massive infections may cause intestinal obstruction.

Diphyllobothriid eggs are oval or ellipsoidal and range in size from 55 to 75 µm by 40 to 50 µm. There is an operculum at one end that can be inconspicuous, and at the opposite (abopercular) end is a small knob that can be barely discernible. The eggs are passed in the stool unembryonated. Although eggs of Adenocephalus pacificus are generally smaller than those of Dibothriocephalus spp. and Diphyllobothrium spp., there is a degree of overlap and thus species identification based on eggs may not be reliable. 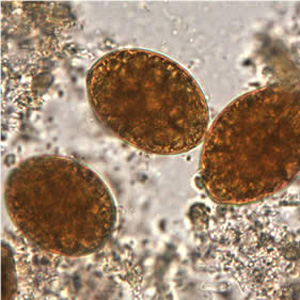 Figure A: Eggs of diphyllobothriids in an iodine-stained wet mount. Image courtesy of the Oregon State Public Health Laboratory. 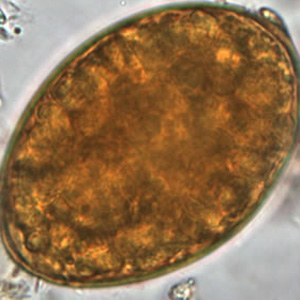 Figure B: Note the knob at the abopercular end. Image courtesy of the Oregon State Public Health Laboratory. 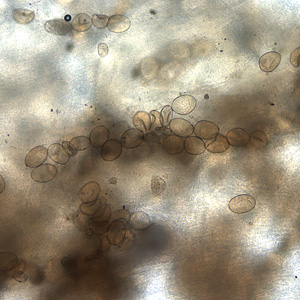 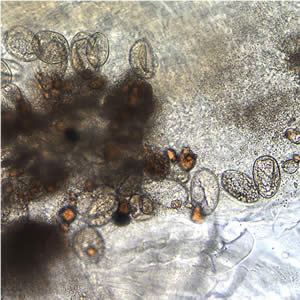 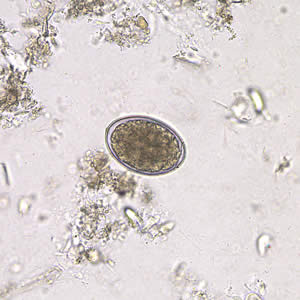 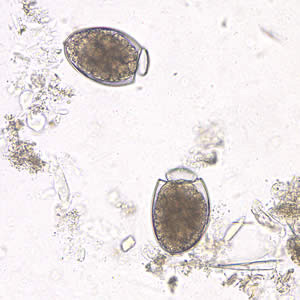 Figure F: Diphyllobothriid eggs in an unstained wet mount of stool. Note the opercula are open. 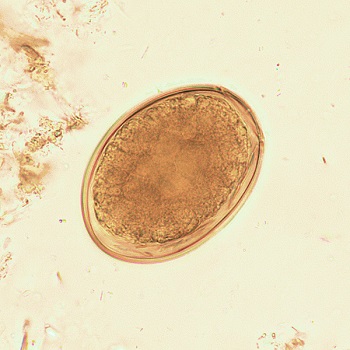 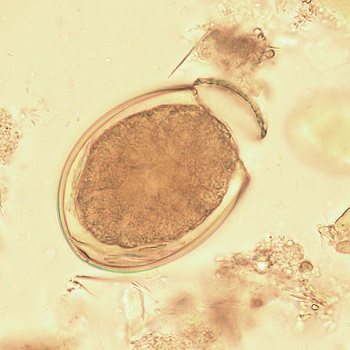 Figure H: Diphyllobothriid egg in an unstained wet mount of stool, with an open operculum. 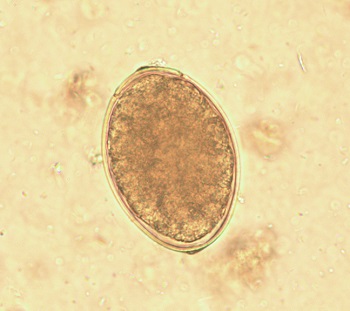 Figure I: Diphyllobothriid egg in an unstained wet mount. 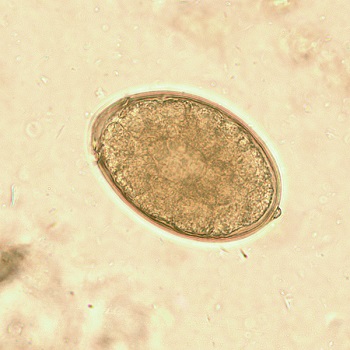 Mature diphyllobothriids are large tapeworms reaching 2—15 meters in length, with occasional larger specimens. The scolex always has two bothria (grooves). The general size and shape of the scolex may be subject to intraspecific variability, though some species-level differences have been described historically. Proglottids are broader than long, with a single genital pore that opens in the middle of the ventral surface; fully mature specimens may be comprised of a 2,000—5,000 proglottids. The ovaries are characteristically rosette-shaped. 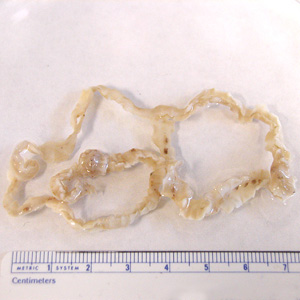 Figure A: Section of an adult Dibothriocephalus latus containing many proglottids. The scolex was not present in this specimen. Image courtesy of the Florida State Public Health Laboratory. 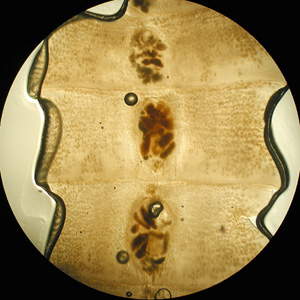 Figure B: Close-up of a few of the proglottids from the specimen in Figure A, showing the rosette-shaped uterus at the center of each proglottid. 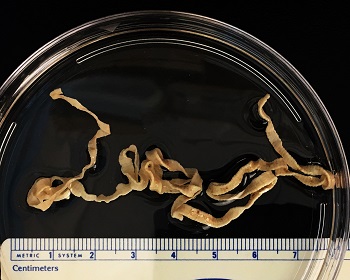 Figure C: Another example of a portion of a diphyllobothriid tapeworm passed spontaneously by a human patient. 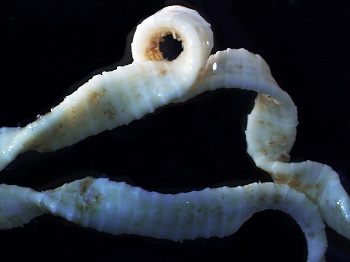 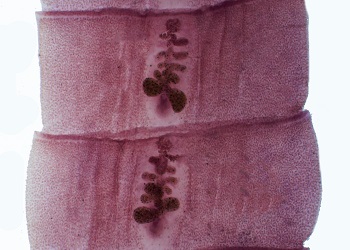 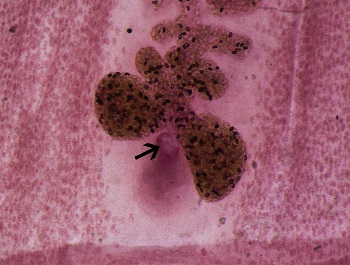 Figure F: Close up the section shown in Figure D, showing the genital pore (arrow) opening on the ventral surface of the proglottid. 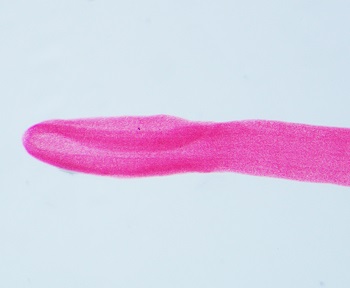 Figure G: The elongate scolex and neck region of D. latus.
Diphyllobothriid adults and eggs in tissue, stained with hematoxylin and eosin (H&E). 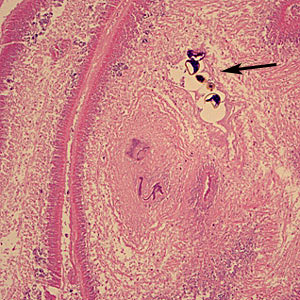 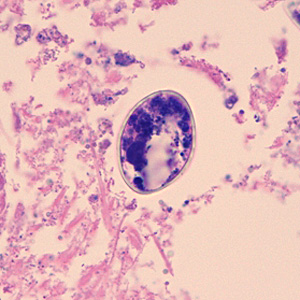 Figure D: Higher magnification (500x) of eggs from the same specimen in Figures A and B. 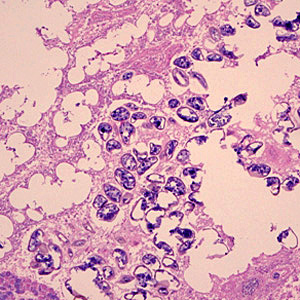 Figure B: Diphyllobothriid eggs from the same specimen in Figure A. Image taken at 100x magnification. 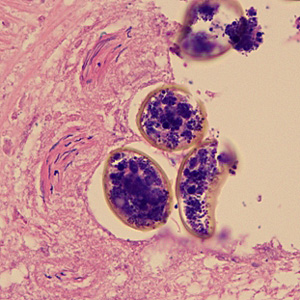 Figure C: Higher magnification (500x) of eggs from the same specimen in Figures A and B.