Dioctophyme (=Dioctophyma) renale, the giant kidney worm, is the largest known parasitic nematode infecting humans — adult females can reach over one meter in length. The genus has been spelled as both “Dioctophyma” and “Dioctophyme”. Human infections are very rare. 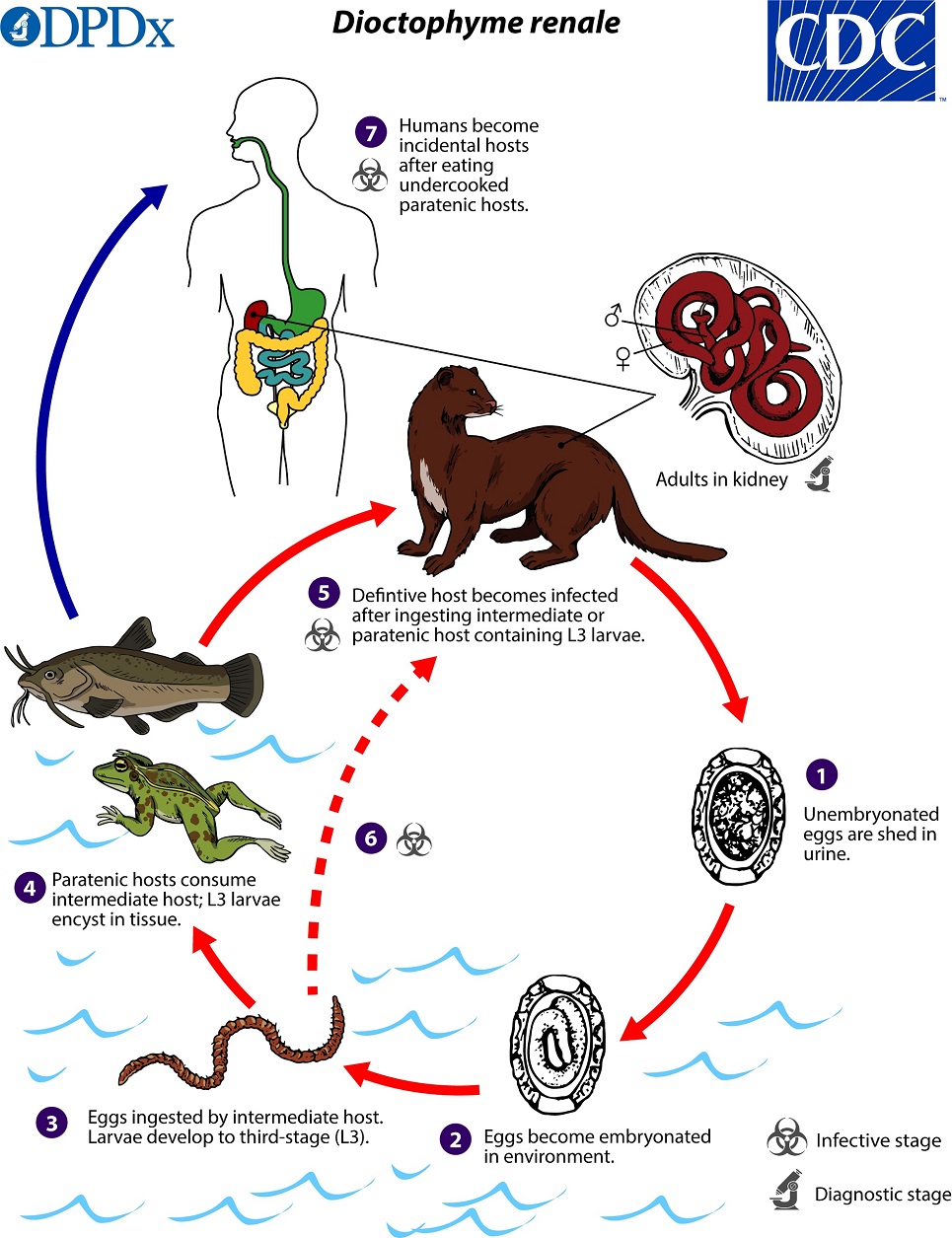 Unembryonated eggs are shed in the urine of the definitive host

. After being eaten by the invertebrate intermediate host (oligochaete worms), the eggs hatch in the digestive tract and mature into L3 larvae after two molts (usually 2—3 months at 20—30°C). If the intermediate host is eaten by a paratenic host, the L3 larvae encyst in tissue and do not develop any further

. Most commonly, the definitive host becomes infected after eating a paratenic host with encysted L3 larvae

Consuming infected invertebrate intermediate hosts may also establish infection, but is probably not the major infection route in nature

Mustelids (particularly minks) serve as the usual definitive hosts for Dioctophyme renale, although infections with adult worms also occur in wild and domestic canids, otters, martens, and raccoons. Rarely, other mammals, including herbivores and humans can become infected.

Aquatic oligochaete worms (e.g. Lumbriculus variegatus), also known as “blackworms”, are known to be intermediate hosts. A number of freshwater fish and amphibian species can act as paratenic hosts.

Dioctophyme renale has a broad and likely worldwide distribution in carnivores, although little is known about its occurrence in Africa. Zoonotic infections have been reported from the United States, Iran, India, China, and Indonesia. It has been suggested that the single case report of D. renale infection from Australia is a misidentification of Leisegang rings, a specific formation of mineral precipitates in the kidney and other organs that can be mistaken for eggs of D. renale.

Most of the earlier reports of dioctophymiasis in humans involved the finding of eggs or adult worms expelled in urine, usually accompanied by hematuria, and sometimes abdominal pain, fever, and eosinophilia. Adult worms have been found in the right kidney, left kidney, both kidneys, retroperitoneal space, and liver. There is one report of a worm rupturing through the body wall (fistula) from an abscessed kidney. There are a few more recent reports of L3 larvae being found in migratory, subcutaneous nodules.

The images below were provided courtesy of Dr. John Gilleard, Faculty of Veterinary Medicine, Host-Parasite Interactions Group, University of Calgary. 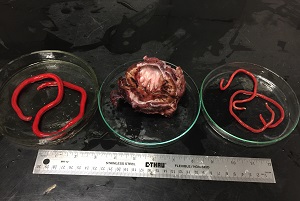 Figure A: One D. renale female (left) and two males (right) extracted from the kidney of a naturally infected dog. 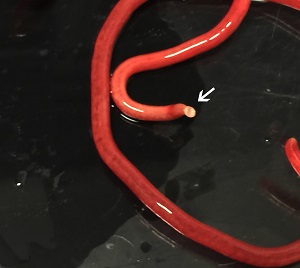 Figure B: Posterior end of a male D. renale, showing the bell-shaped copulatory bursa (arrow). The spicule is not extruded. 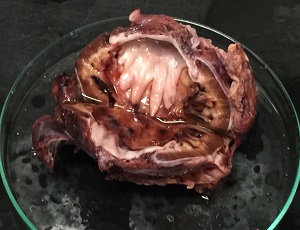 Figure C: A kidney, which contained three adult D. renale, removed from a naturally infected dog. In renal infections, the parenchyma may be largely destroyed by the adult worms.

Dioctophyme renale is known as the giant kidney worm, and parasitizes a wide range of primarily fish-eating carnivorous mammals (including mustelids). As humans are not the usual definitive host for D. renale, the parasite does not usually present the way it would in its natural definitive hosts. Although there have been a few cases in humans with kidney involvement, often the larvae wind up in subcutaneous nodules and do not develop any further. 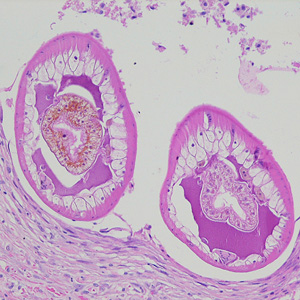 Figure A: Cross-sections of larvae of D. renale in a subcutaneous nodule, stained with hematoxylin and eosin (H&E). Images courtesy of the Laboratory of Parasitology, National Public Health Research Center in Vilnius, Lithuania 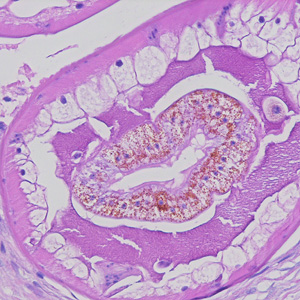 Figure D: Higher-magnification of the specimens shown in Figures A and B, showing a close-up of the characteristic intestine, with cuboidal, uninucleate cells, pigment, and microvilli. 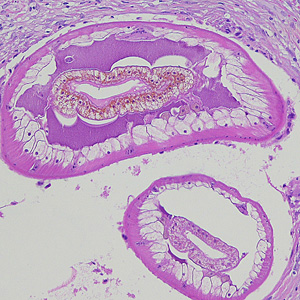 Figure B: Cross-sections of larvae of D. renale in a subcutaneous nodule, stained with hematoxylin and eosin (H&E). Images courtesy of the Laboratory of Parasitology, National Public Health Research Center in Vilnius, Lithuania 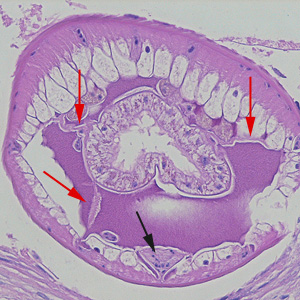 Figure E: Higher-magnification of the specimens shown in Figures A-D. Shown in this image are the tall, polymyarian muscle cells, the characteristic ventral chord with a U-shaped row of nuclei (black arrow), and three pseudocoelomic membranes (red arrows). 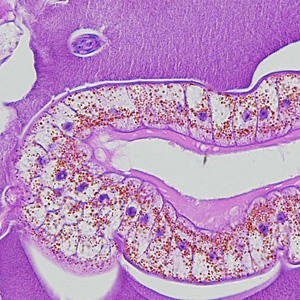 Figure C: Higher-magnification of the specimens shown in Figures A and B, showing a close-up of the characteristic intestine, with cuboidal, uninucleate cells, pigment, and microvilli. 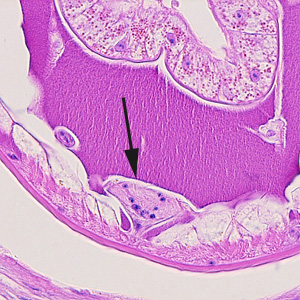 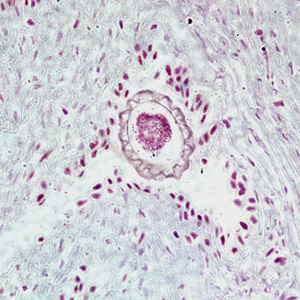 Figure A: Egg of D. renale in the kidney of a mink, stained with hematoxylin and eosin (H&E). 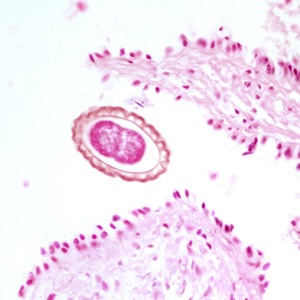 Figure B: Egg of D. renale in the kidney of a mink, stained with hematoxylin and eosin (H&E).

Identification of eggs in urine, or adult worms which are sometimes spontaneously expelled in urine. Adults may also be found during laparotomy or hysterectomy (or necropsy) when in the abdominal cavity. L3 larvae in subcutaneous nodules may be observed in stained tissue sections.

Standard laboratory precautions apply for the examination of tissue sections.