The coccidian parasite, Cystoisospora belli, infects the epithelial cells of the small intestine, and is the least common of the three intestinal coccidia that infect humans.

. In further maturation after excretion, the sporoblast divides in two (the oocyst now contains two sporoblasts); the sporoblasts secrete a cyst wall, thus becoming sporocysts; and the sporocysts divide twice to produce four sporozoites each

. Infection occurs by ingestion of sporocysts-containing oocysts: the sporocysts excyst in the small intestine and release their sporozoites, which invade the epithelial cells and initiate schizogony

. Upon rupture of the schizonts, the merozoites are released, invade new epithelial cells, and continue the cycle of asexual multiplication

. Trophozoites develop into schizonts which contain multiple merozoites. After a minimum of one week, the sexual stage begins with the development of male and female gametocytes

. Fertilization results in the development of oocysts that are excreted in the stool

Worldwide, especially in tropical and subtropical areas. Infection occurs in immunodepressed individuals, and outbreaks have been reported in institutionalized groups in the United States.

Infection causes acute, nonbloody diarrhea with crampy abdominal pain, which can last for weeks and result in malabsorption and weight loss. In immunodepressed patients, and in infants and children, the diarrhea can be severe. Eosinophilia may be present (differently from other protozoan infections).

The oocysts of C. belli are large (25 to 30 µm) and have a typical ellipsoidal shape. When excreted, they are immature and contain one sporoblast. The oocyst matures after excretion: the single sporoblast divides in two sporoblasts, which develop cyst walls, becoming sporocysts, which eventually contain four sporozoites each. Cystoisospora will autofluoresce under ultraviolet (UV) microscopy. 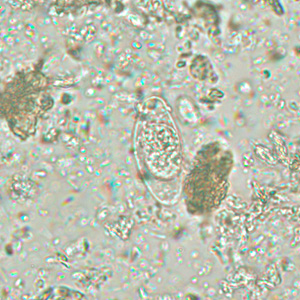 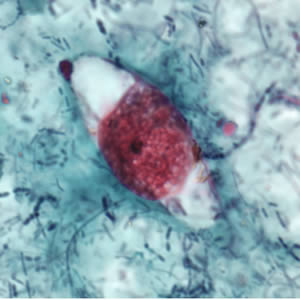 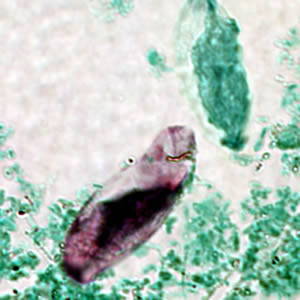 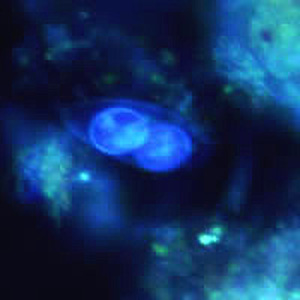 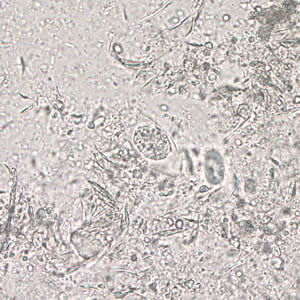 Figure A: Immature oocyst of C. belli in an unstained wet mount showing a single sporoblast. 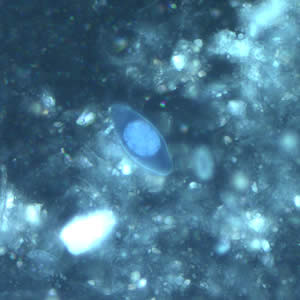 Figure E: Same oocyst as in Figures A and C but viewed under ultraviolet (UV) fluorescent micrscopy. 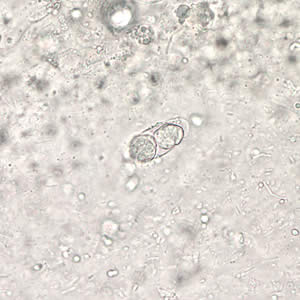 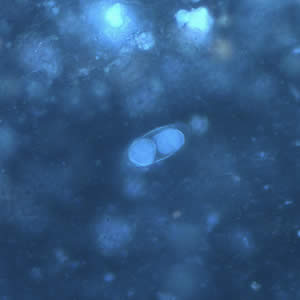 Figure F: Same oocyst as in Figures B and D but viewed under UV microscopy. 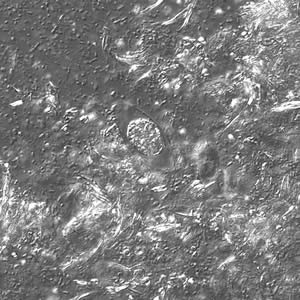 Figure C: Same oocyst as in Figure A but viewed under differential interference contrast (DIC). 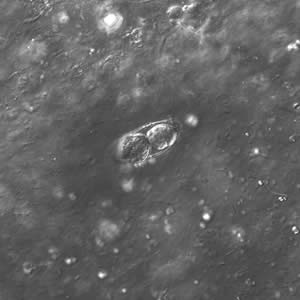 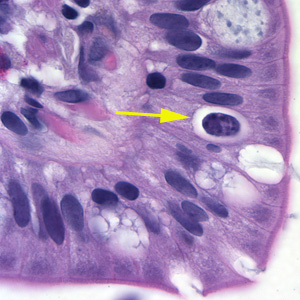 Figure A: Oocyst of C. belli in the epithelial cells of a mammalian host, stained with H&E (yellow arrow). 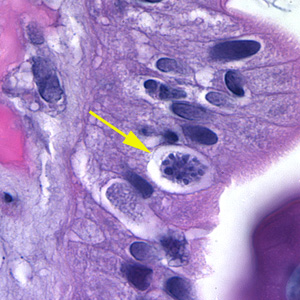 Figure B: Oocyst of C. belli in the epithelial cells of a mammalian host, stained with H&E (yellow arrow).

Microscopic demonstration of the large, typically shaped oocysts, is the basis for diagnosis. Because the oocysts may be passed in small amounts and intermittently, repeated stool examinations and concentration procedures are recommended. If stool examinations are negative, examination of duodenal specimens by biopsy or string test (Enterotest®) may be needed. The oocysts can be visualized on wet mounts by microscopy with bright-field, differential interference contrast (DIC), and epifluorescence. They can also be stained by modified acid-fast stain.

More on: Morphological comparisons with other intestinal parasites. 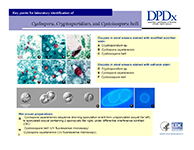